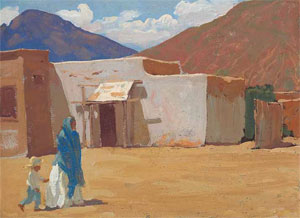 The California-born artist Maynard Dixon (1875-1946) first traveled to Arizona in 1900 to absorb what he believed was a vanishing West. Dixon found Arizona a visually inspiring and spiritual place that shaped the course of his paintings and ultimately defined him. Dixon journeyed to Arizona as many as 10 times between 1900 and 1940, when he made Tucson his winter home. He ultimately created a body of work that established his significance within the vanguard of artists who portray Western subjects, and many of his most successful works were adaptations of Arizona subjects.

A Place of Refuge: Maynard Dixon’s Arizona will be the largest presentation of the artist’s work to date. Organized by the Tucson Museum of Art, the exhibition will include in excess of 135 works and the first to focus solely on the renowned painter’s depictions of Arizona subjects. The exhibition opens to the public on Oct.11 and will continue through Feb. 15, 2009. 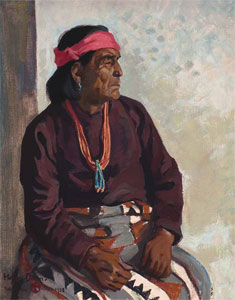 “Arizona-the magic name of a land bright and mysterious, of sun and sand, of tragedy and stark endeavor,” Dixon professed, “So long had I dreamed of it that when I came there it was not strange to me. Its sun was my sun; its ground was my ground.”

One need not search long to discover the affinity that Dixon had for Arizona.

“ A vast and lovely land,” Dixon stated. “saturated with the inexhaustible sunlight and astounding color, visible and unbelievable distinctiveness, and overspread with intense and infinite blue.” 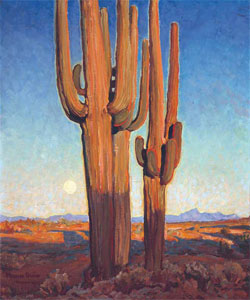 As early as 1903 Dixon referred to Arizona as home. He lamented to friends that he longed for Arizona and the solitude of the desert. “I think we will finally settle down on the desert,” Dixon stated, “where being lonesome is the real thing,”

Dixon spent the majority of his life in San Francisco’ although he frequently traversed Arizona’s varied expanses remaining physically and spiritually tied to Arizona. In 1939, he made Tucson his winter home and spent his remaining years painting his beloved desert landscape. Examining Dixon’s Arizona subjects allows for an in-depth study of many aspects of the artist’s career. 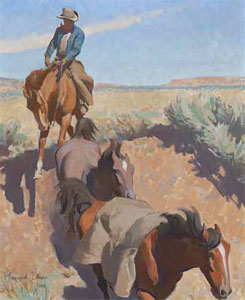 Between 1900 and 1946 Maynard Dixon would roam the remote corners of Arizona seeking to find the essence of the landscape and its inhabitants.

“My objective has always been to get close to the real nature of my subject as possible – people, animals, and country,” said Dixon. “The melodramatic Wild West idea is not for me the big possibility. The nobler and more lasting qualities are in the quiet and most broadly human aspects of Western life. I aim to interpret, for the most part, the poetry and pathos of the life of Western people seen amid a grandeur, sternness and loneliness of their country.” 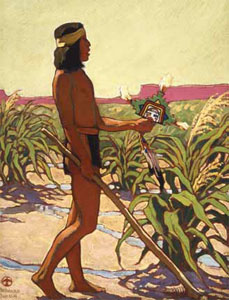 This idea grew on Dixon to encompass not just Arizona but the entire West as well. Expressing in paintings the life and the country of the West soon became Dixon’s refined devotion.

“But the big thing is this – that there is something of the West that sings in us – both of the life and of the country – that demands to be expressed,” stated Dixon.

In June 1900 the 25-year-old artist resigned his post at the San Francisco Examiner and departed his home in hopes of discovering a West he had not yet experience. The atmosphere and demands of the environment for illustrators in San Francisco had overtaken him, and he considered “going east to see the West.” 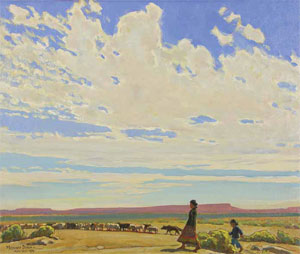 Charles F. Lummis, editor of Land of Sunshine, wrote, “L. Maynard Dixon, for some time chief artist of the San Francisco Examiner, and by odds the most promising illustrator of this coast, has fone to grow in the waiting country – the New Mexico and Arizona which are such bonanzas for the artist but bonanzas almost untouched…He is likely to do good over there…It will be a wonder if he does not “strike it rich.”

When Dixon first ventured into Arizona in 1900 he was as much seeking an experience as a new subject. 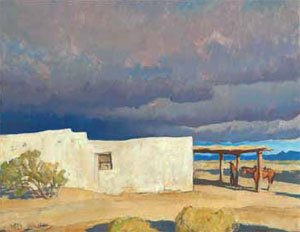 “In those days in Arizona being an artist was just something you had to endure – or be smart enough to explain why,” Dixon stated, “It was incomprehensible that you were just out ‘seeing the country.’ If you were not working for the railroad, considering real estate or scouting for a mining company what the hell were you? The drawings I made were no excuse and I was regarded as a wandering lunatic.”

Dixon traveled to remote areas meeting and sketching Native Americans, Hispanics, cowboys and the landscape. He enjoyed the people and seemingly mundane activities, “The place looks like hell – dead cattle everywhere – punchers all gone out or gone to mining; all the infallible streams and springs gone dry; farmers on the verge of starvation. These people are about dried out…” He continued, “(W)e had a freshet down the creek ‘tother day that will tide the old man’s orchard over. I helped irrigate and still bear the scars of toil; -that was something real.” 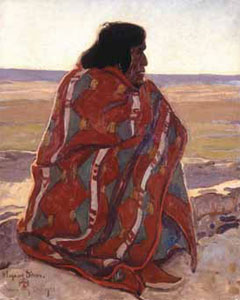 Dixon was searching for a real experience in the West. Over a span of more than 45 years, Dixon would venture in and out of Arizona searching for Western experiences and gathering material for his artistic endeavors. Arizona also proved to be a personal sanctuary for the artist”…I knew that only the open desert could restore my health,” stated Dixon.

The confluence of natural and cultural contents he found in Arizona developed into the personal and artistic refuge Dixon needed to establish himself as one of the West’s most revered painters.” 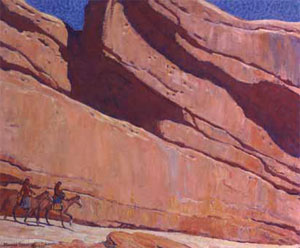