Maynard Dixon's Nvorczk: The Other Side of Dixon 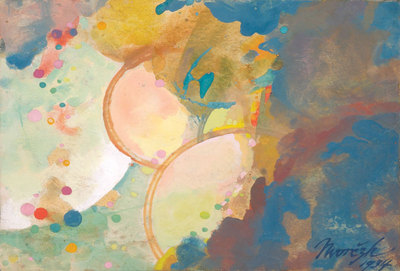 Those who thought of legendary landscape artist Maynard Dixon (1875-1946) as only a chronicler of the American West will be surprised, and perhaps even shocked, to learn that the artist also painted abstract-modernistic pieces. A body of 50 such works will be unveiled to the public for the first time in an exhibition titled Maynard Dixon’s Nvorczk that opens Oct. 9 at the Medicine Man Gallery in Tucson, Arizona. This show and sale will remain on display through March 15, 2009.

Dixon completed these works, which total 60, between 1917 and 1934 under the pen name Nvorczk. While a few of these pieces remain in private collections, the majority will make their public debut at the Medicine Man Gallery, were nearly all will be available at a fixed price. A catalog containing all the works will be available for purchase.

“Imagine that you find a body of 50 paintings by an early American 20th-century painter – abstract-looking pieces in a modernistic style. If that was found and brought to the general art world, people would be very excited. It just so happens that it’s Maynard Dixon,” says Dr. Mark Sublette, an expert on Dixon and owner of Medicine Man Gallery. “For some it will shock. They won’t believe it’s Maynard Dixon. They’ll be amazed that he did these. Some will be confused about them because Dixon is though of as a Western landscape, cowboy, and Indian painter. But those who really know him know him as a modernist to some extent, so it’s not too surprising to true collectors because they know how complex he was.” 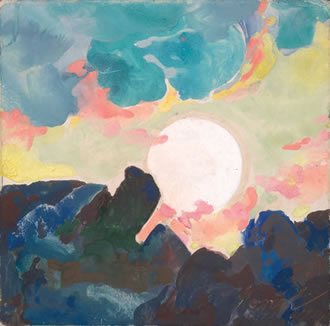 Sublette has known of these obscure works for over a decade. They were kept private until Maynard Dixon’s son John got them in 1987 from Dixon’s third wife, Edith Hamlin. John Dixon received the entire collection, which has never been seen publicly until now. The entire body of work also will be included in the Maynard Dixon Catlong Raisonne by Donald J. Hagerty. Sublette believes that Maynard Dixon used the name Nvorczk because he didn’t want to confuse his real clients. In explaining Dixon’s alter ego, Sublette says, “I believe he did these to show the modernist world at large that he could do it, and to prove to himself that he could do it. After all, modern art was getting a great deal of press in the early 1920s. He also did them for an emotional release…for fun.” 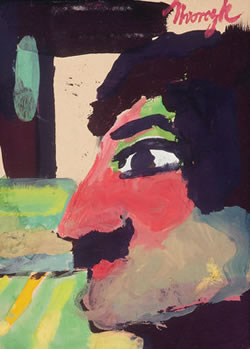 Sublette has lived with the Nvorczk pieces for a while and therefore has gained valuable insight into the work.

“I’ve handled Maynard Dixon for a long time, and these are the most important pieces I’ve got to handle in my career. It’s an important thing,” he says. “I think the overall impression I get, together as a body, they are extremely strong emotional images. When I look at them I see another component of Dixon that the general public would rarely see…a complex individual with multiple talents in many areas of art.” 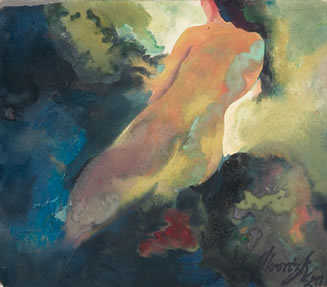 Several Nvorczk pieces have caught the attention of Sublette, a respected buyer, seller, and researcher of Western and Native American art and jewelry. One oil painting in particular, One Eyed Nude, offers an impressive color composition.

“Look how haunting that face is, you get a sense of loneliness,” Sublette observes. “I find that to be a very compelling image.”

Another interesting piece, done in gouache, is Gastronomic in Dixon’s own hand on the back.

“It’s such an abstract piece. It has this Pollack-esque feel to it,” says Sublette, “It’s a lovely example of use of color.” 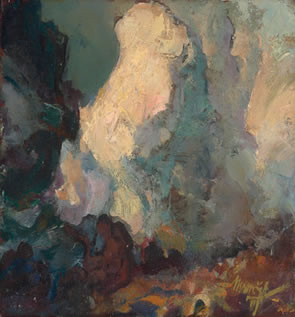 The painting Life in Limbo expresses Dixon’s fascination with clouds. “When you look at that painting, you don’t have to go far to see Dixon’s hand that he’s so well known for,” says Sublette. “It shows his interest in clouds, but takes it to a different level…more emotionally charge.”

Sublette and John Dixon feel that now is the ideal time to bring these hidden gems out for public viewing to coincide with the Tucson Art Museum’s special Maynard Dixon exhibit that runs October 2008 through February 2009 and will feature more than 100 Dixon works.

“For true collectors, it’s a once-in-a-lifetime opportunity to get something of Maynard Dixon’s that’s rare and important to his body of work,” adds Sublette. “If you’re interested in one of the great American painters of the West, take the time to see such an unusual and rare body of work. These paintings can be viewed as cutting-edge abstract modernistic. If you look at the entire collection, you’ll be amazed at the range of Dixon’s painting; they’re abstracts, realist, and almost expressionist pieces, some which are sexually charged. They’re not what you think of the Western works of Dixon.”