When Mark Sublette started his residency in medicine, and later his master's degree, in Tucson, Arizona, the New Mexico resident was struck by how similar Tucson, nicknamed the "Old Pueblo," was to Santa Fe. "They really were synonymous to each other starting with the mountains, but also focusing on the desert and the food, music and art scenes as well," Sublette says. "I felt like Tucson was retaining part of its past in ways that the rest of Arizona wasn't, and it had a lot of identity because of that. I thought it was a gem of a place."

Sublette never left Tucson, and today he owns one of the most prominent Western art galleries in the Southwest, Medicine Man Gallery, which he started in 1992. In the years since he opened the gallery, Sublette and his wife, Kathleen, have devoted their lives to promoting Western and Native American art and the artists who make it, as well as offer top-quality examples in the areas of Navajo weavings, Pueblo pottery, Native American jewelry, bronzes and paintings from top artists. 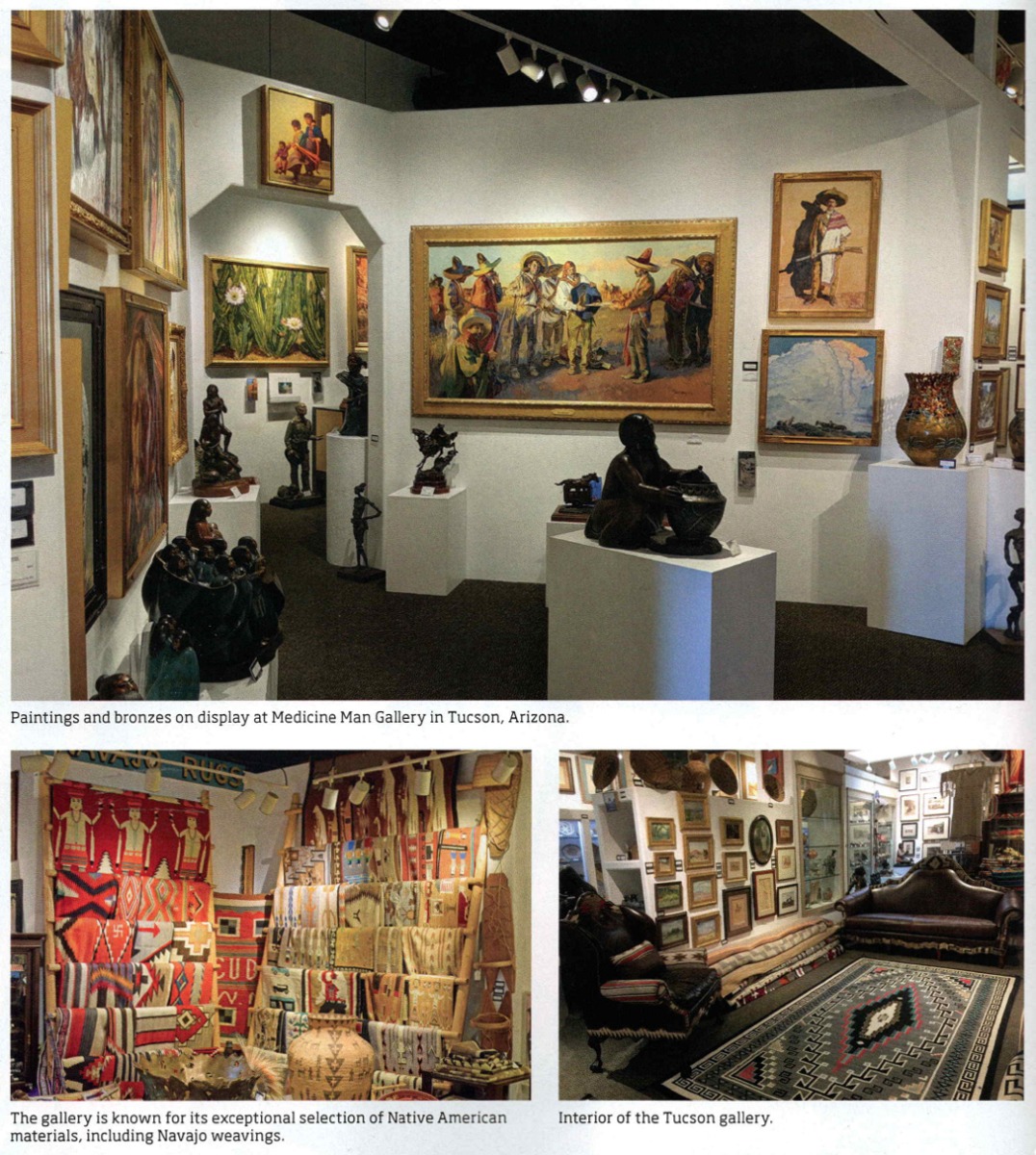 One of the keys to the gallery, he says, is to offer both historic and contemporary works, an aspect of the business that can be seen in every category, including in Pueblo pottery with offerings from living artists, but also the great masters such as Nampeyo, Maria Martinez, Tony Da and Margaret Tafoya. "I have work from all the Pueblos and also what we call 'railroad pottery.' When the trains came west in 1879, all the Pueblo Indians on the Rio Grande they wanted to make money with everyone else, so they started making pottery to sell, in addition to the pottery they were making for use and for trade. So you'll see those early pots as well as new pots ... a little bit of everything," Sublette says. "And you'll also see that in our Navajo and Hispanic weavings-1 probably buy 10 new weavings every week, many directly from the weavers-and in Native jewelry, which we deal with in large amounts."

Additionally, Medicine Man features many of the top Western painters and sculptors, including artists such as John Moyers, Matt Smith. Shonto Begay, Teal Blake, Dennis Ziemienski, G. Russel Case, Ed Mell, Josh Elliott, Billy Schenck, and many others. "When I look for artists for the gallery I'm looking for original voices. I wan them to do something different than their peers,” he says. "Maybe it's a different way they handle color or light, or just a different sensibility to the paint or clay. When an artist has a unique quality and clearly developed style it shows in their work, and that's what I want."

Another element that Sublette likes to focus on is keeping his collectors, and even just casual observers of Western art, informed about the various aspects of the art market. He does this through his popular Art DealerDiaries podcast, his informative YouTube videos, a weekly newsletter and his website, www.medicinemangallery.com, which serves as hub for all the content he makes. "I'm always thinking of the collector. There's a lot of materials out there in the world and if I can educate people so they don't make any mistakes it's better for all of us," he says. "I try to spread the knowledge around as best I can, whether it's related to buying, selling, valuation or anything else." 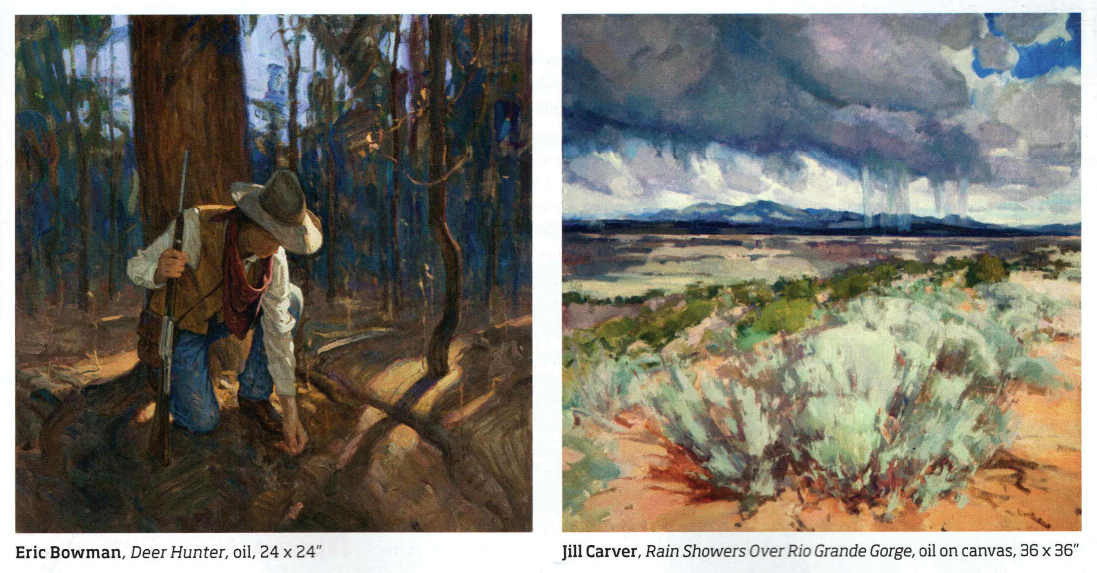 Sublette says the gallery has even started expanding into estate collections, which has brought some amazing new artworks into the gallery. Everything offered in the gallery, more than 7,000 items altogether, can be found on the website, and always with a listed price. "It's important for that process to be transparent to the collector so they can shop and compare," the gallery owner says. "Something cool I like to also mention is that our website was started in 1996, way before even Google. We've revamped the site several times, but we've had an online presence for a long time."

For Sublette's next show, he will ring in the new fall season with a group exhibition featuring many of the gallery's top artists, including Mell, Blake, Elliott, Ziemienski, Terri Kelly Moyers, Brett Allen Johnson, Francis Livingston, Howard Post, Gary Ernest Smith, Deladier Almeida and many others.

Schenck, who has shown at Medicine Man Gallery for many years, will be presenting one of his famous comic-inspired paintings with word bubbles for his two Western figures. "Did you sell the ranch?" asks a female figure. A cowboy character replies, "I can't remember." The works emphasizes Schenck's off-kilter perspective of the West, which he injects into many of his work with humor and his Pop Art sensibility.

Bringing his careful use of color and detail, David Meikle will be offering Big Bend, Zion Canyon, a 60-inch-tall upward view from the floor of Utah's famous national park, while Jill Carver will be showing a more painterly desert scene in Rain Showers Over Rio Grande Gorge, with purple clouds that loom large over a sage­strewn desert valley. An untitled work by Jim Woodside takes a more modernist approach to a desert landscape, with geometric formations in the cloud and bold colors swept together with his formidable brushstrokes. 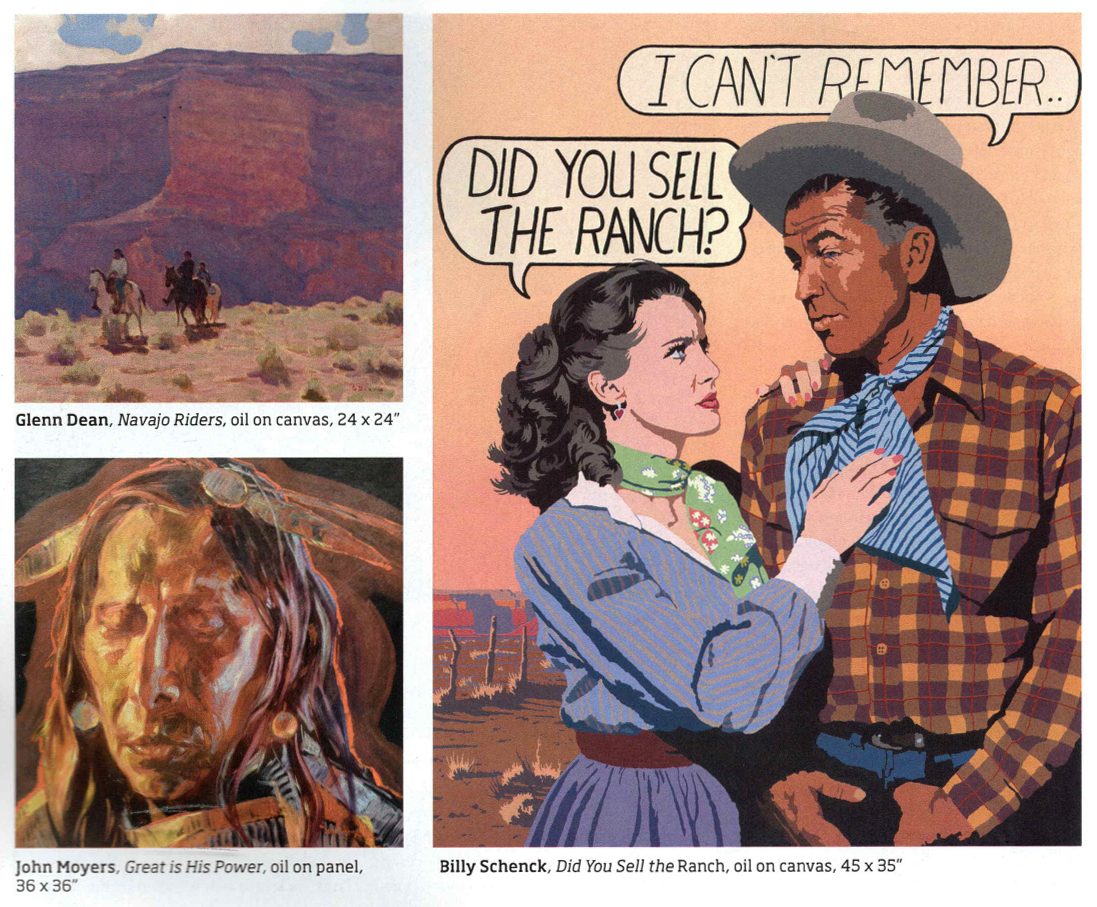 Fresh off a busy summer, Glenn Dean will be bringing Navajo Riders, a 24-by-24-inch oil on canvas that shows a trio of figures with a large rock face behind them in the distance. "The idea for this piece came from a trip I took to the Southwest several years ago with some artist friends," Dean says. "I was driving back home alone through the Navajo reservation and saw some Navajos on horseback coming over a small ridge with a large backlit sandstone cliff behind. I was immediately inspired by what I saw bL1t it was just a fleeting impression of it as I was driving past on the highway at 60 mph so I finally put this painting together in an attempt to honor that moment."

Eric Bowman will be represented by Deer Hunter, a forest scene with a figure bending down to examine something in the dirt. "Deer Hunter is the second in a series I've been working on involving a young hunter. The model is a teenage neighbor of mine who had the look I was after; a little seasoned but still wet enough behind the ears to be in awe of the whole experience," Bowman says. "As always, the narrative of my paintings are open-ended allowing the viewer to write the story ... is he out for the sport, or under pressure to provide for his family while father is away at war? Either way, it's a portrait of a young man pitted against nature in a time-honored American tradition."

Stephen C. Datz is a featured artist in many of Medicine Man's shows, and he returns this year with another slightly abstracted view of Southwestern landscapes. "This idea originated on one of my many hiking trips into the Escalante area of southern Utah," Datz says of Canyon Rhythms. "It is an unusual view of a subject that would typically be approached from a broader perspective-the magnificent Escalante Natural Bridge. What we see here is the eastern abutment of this impressive sandstone arch and part of the canyon wall behind it. I had hiked right up underneath the huge span for a bit of shade and rest, and was, immediately struck by the unusual compositional possibilities in this view and the marvelous rhythmic pattern of light and shade. The way the light was striking the contours of the bridge and the bit of canyon behind it fired the shadow areas with an amazing glow as it reflected from the sandstone. The cool, shaded foreground directly under the span, in which I was sitting, provides the perfect note of contrast. Finding these 'right place, right 'time' sort of surprises off the beaten path is my favorite part of going out into the landscape to paint."