As a boy, Mark Rossi delighted in wandering through a forest near his home in Osage Hills of Oklahoma, collecting leaves, bones, and tortoise shells. He spent hours watching a nest of hatchling robins outside his bedroom window and making careful notes and sketches. 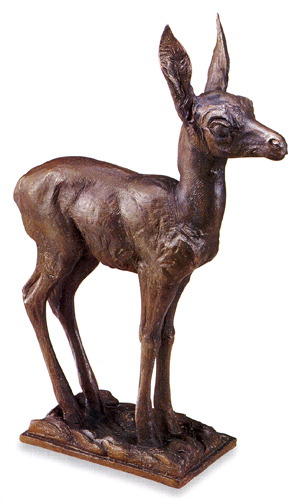 At 49, Rossi goes exploring in the Sonoran Desert near his sculpture studio in Tucson, AZ. He remains an avid student of nature, having a particular fascination with the everyday dramas enacted by a cast of seemingly unremarkable creatures such as jackrabbits, lizards, and tortoises.

“As alien as reptiles might seem to us humans, they remain as interesting as action movies and luminescent as lullabies,” Rossi said in an artist’s statement about his reasons for producing some 30 sculptures of lizards. “One only needs to make time to allow for the discovery.” In his view, lizards “inhabit the most lively crevices of our imagination.”

Rossi’s lifelong relationship with nature – that of a fascinated, unobtrusive observer rather than game hunter – is reflected in his approach to wildlife sculpture. His bronzes tend to depict tranquil, subtle moments, such as a black-tail jackrabbit scratching its ear, a desert tortoise lumbering along like a small armored tank, or a kit fox staring alertly into the distance. His most recent bronzes transcend the single figure to capture creatures within a microcosm of nature – fish swimming among logs and sticks in stream-bed, for example.

“My work as a sculptor is about my relationship with nature,” Rossi says. “The way that each person relates to the sculpture will be different because it reflects their own view of nature.” Such has been the case throughout the history of wildlife art, going back to prehistoric cave paintings that some historians have interpreted as relating strictly to the rituals surrounding hunting and survival. Rossi suspects prehistoric people might have had a more sophisticated relationship with animals than imagined – and that they might have drawn pictures of animals not strictly as a food source but also as an expression of life and humanity. 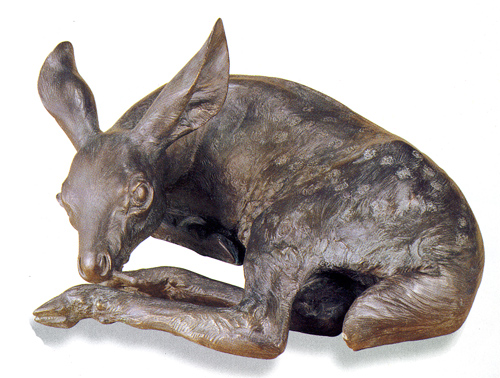 Sonoran Desert wildlife provides a touchstone for Rossi, although he has sculpted a variety of subjects, including human portraits, insects, birds, animal skulls, and desert botanicals such as saguaro cactus blossoms. He sculpted 25 desert creatures for the Arizona-Sonora Desert Museum (including javelinas, coyotes, a bobcat, a frog metamorphosis, and a dozen lizards) and eight exotic animal figures for the Reid Park Zoo in Tucson (including elephants, a gibbon, a Bengal tiger, and a polar bear). Among his other public works are three black-tail jackrabbits that are seven times larger than life-size at the Centerpoint Plaza in Tempe and a family of five mountain lions that, when installed, will stand twice life-size at D.C. Ranch in Scottsdale.

For Rossi, the process of discovery takes place on many levels, beginning with external observation. The artist then draws far-ranging connections between his observations of wild creatures and his philosophical and scientific interests, from anthropology and archaeology to the poetry of particle physics.

Rossi’s observation of animals – whether focused on lizard, javelina, or mountain lion – begins with studying the way they behave in their environment and how they express their unique qualities of aliveness. He vividly recalls a magical encounter with a white-tailed fawn that lay dozing in the Mexican rainforest with its nose resting on a hind hoof, undisturbed by his presence. Equally enchanting was the sight, in the Yucatan, of a crested tropical lizard that reminded him of a miniature dinosaur running upright along the forest floor, leaping into moving water, and swimming elegantly to the opposite side.

The artist goes hiking as often as possible and sometimes carries a camera and sketchpad, but most often he captures the images in his mind. “The camera is a god tool, but the best recording I’ve done is when I’ve mentally and visually focused in on a subject and remembered it. This is something that I’ve learned to do,” he says. It’s like when I used to watch my kids play Little League baseball. I found that if I brought a video camera with me, I never got to watch them play because I was always looking through the lens. It takes away from the experience.”

Aesthetically, Rossi explores form and texture and the interplay between realism and abstraction. Like many of his generation, he had training in art school that was aimed entirely toward abstract art. After graduation, he set out to hone his skill at capturing realism, though abstraction remains an important element of his work.

“When I do a sculpture titled Jackrabbit or Doves Nesting in a Palm Tree, there’s no way it’s realistically a jackrabbit or doves nesting in a palm tree,” Rossi says. “But they look alive because of the success of the illusion or the abstraction. In a sense, if you make an exact mold of something, then you’ve kind of squashed its personality. But if you have a conversation with it and offer a translation, then you will express its personality and give it a voice.”

Capturing form and texture becomes even more challenging when animals are depicted in their natural environment. In one such sculpture, Rossi depicts a rainbow trout swimming through an underwater tangle of logs and sticks near the pebbled bottom of a stream. It is a realistic, even down to the detail of fins, eyes, gills, and serrated teeth, yet at first glance the sculpture appears to consist of abstract shapes. Discoveries unfold as the realistic elements take shape in the viewer’s eye.

Ultimately it is the internal dialog – the conversation between artist and subject – that breathes life into Rossi’s work. When he walks in the desert, seeing and touching things, he must find ways of connecting that experience to the time spent in the studio, when he is remembering the sights, shapes, and gestures of the animal and how it related to its surroundings. For examples, Rossi explains how a broad view of the Sonoran Desert might give the impression of chaos, but the longer a person looks at the landscape, the more it appears to have a certain intrinsic organization. He points out the same is true of American abstract expressionist painting, which appears chaotic but in reality is highly organized because of the choices and decisions the artists made. “When I’m working with clay, I would like for that natural order of things, which one might call chaos, to enter the process,” he says.

For example, Rossi was recently working on sculpting a kit fox in its summer coat – “looking pretty lean and scruffy.” As he began to shape the clay, developing the form and anatomy, he considered such elements as whether to show a segment of muscle or cover it in texture. But he also left some areas of clay alone to develop spontaneously. “I like it when the clay gets to have its own voice,” he says. “I have to be a big part of the conversation, but I want to keep the aliveness of the clay by letting unexpected things happen. I want the end result to be a conversation between sculpting and the clay that celebrates the beauty of nature.”