Maria Martinez of San Ildefonso Pueblo has been synonymous with quality pottery for nearly 100 years. Her artistic sensibility allowed her to create artworks that are considered to be some of the ﬁnest ceramics produced during the 20th century. 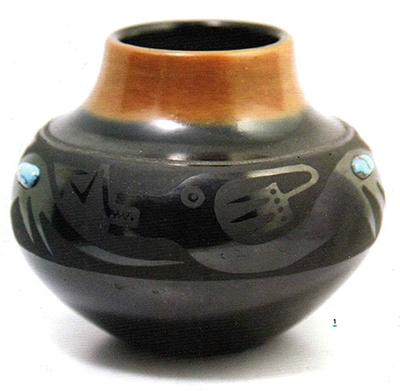 Even President Obama’s Oval Office has a place for Maria's pottery. Omnipresent at every Oval Office press interview is a beautiful feathered black volcano shaped jar, which rests in a bookshelf adjacent to the president's desk, a gift from the Johnson administration compliments of Lady Bird Johnson who recognized Maria’s genius and had good taste in Southwestern art. 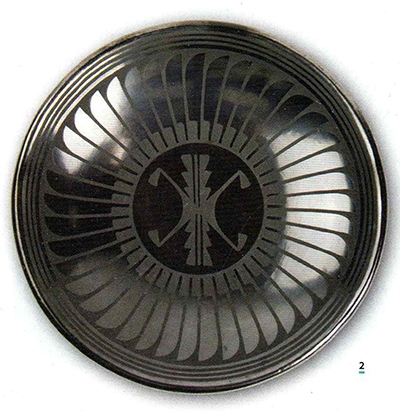 Maria's technical ability with simple native clay was unsurpassed in her time. She was born in approximately 1887 and worked with numerous members of her family over a half-century timeline. Maria continued making beautiful plain black, highly burnished pots into the late 1960s.

Dating and attribution of Maria pottery can be accomplished by slip coloration (the thin outside clay layer) and by examining her signature. The earliest pieces by Maria were polychrome, red/black/cream color, and were often unsigned. These are the hardest to attribute. These rare pieces require an evaluation by a dealer specializing in Maria’s pueblo pottery, or scholar, who is familiar with her early vessel construction and design. Later black-on-black pots, which were usually signed, make authentication easier. 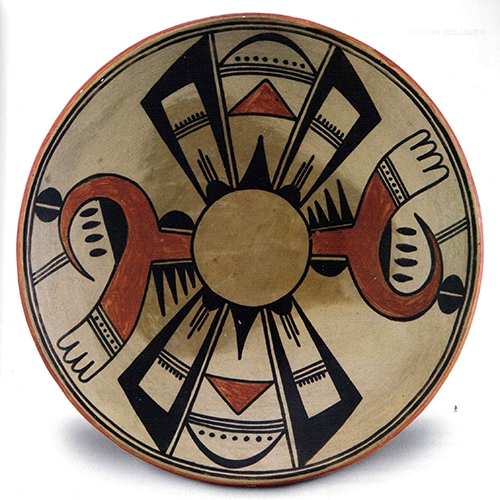 Julian Martinez, a well—respected watercolor artist, was the painter of Maria’s early pottery. Maria’s forte was in construction of the ceramic vessel and stone polishing the outside slip. Pottery making was always a family affair. Maria’s expertise showed in her unique vessel shapes, which were of exceptional symmetry with walls of even thickness and surfaces free of imperfection.

Maria and Julian worked with the archeologist Dr. Edgar Lee Hewett in 1907, who was doing an excavation of ancient Puebloan sites on the Pajarito Plateau above San Ildefonso. This collaboration inspired Julian to develop many of his painting motifs, which were based on prehistoric designs. In 1919, Julian discovered a black—on-black matte pottery style that would revolutionize not only San Ildefonso pottery production but also the nearby neighboring Santa Clara pueblo; this style of design now is associated with traditional Pueblo pottery. 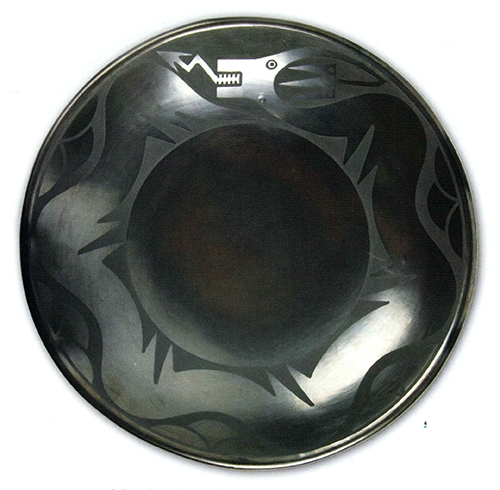 Not long after the black-on-black matte decoration was discovered the couple’s recognition as important ceramic artists begin to solidify. It was at this time they started to sign the bottoms of their pieces. The first signature was simply Marie, which was used until the early 1930s.

The husband—and-wife team would make polychrome pottery until around 1930, after which it was phased out as black-on-black pottery became popular. By 1935, Maria’s pots were signed “Marie and Julian,” a signature she would retain until her husband’s death in 1943. One of the finest pots made during their collaboration was a 1940 pot that sold at auction in 1999 called the Cartier jar, named after Jacques Cartier, a dancer in the Ziegfeld Follies who bought it from Maria. The impressive 15-inch jar sold for $255,500. 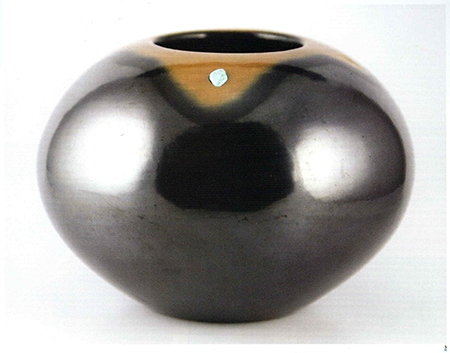 After Julian’s premature death at 46, Maria started working with Santana, her son Adam’s wife. They worked together until 1956 and during this time her pots were signed “Marie and Santana.” Popovi, Maria and Julian’s son, began his own partnership with Maria in 1957 which produced some of her most innovative pottery including red ware, revival polychrome and, in 1964, Sienna, or as Popovi called the new color “Carmel." All these pottery types were signed “Maria/Popovi,” and starting around 1961, a month and year was also added to the bottom reflecting the date of creation.

Popovi was the first to inlay turquoise with Maria, a tradition that would be continued and enhanced upon in pottery created by Popovi and Anita Da’s son Tony Da. Popovi was an expert in firing and was able to master what is now referred to as a gunmetal finish. Using a very hot outdoor kiln and letting in just enough air through the manure to ventilate the dried clay pots as they cooked, a grayish mirror-like finish was created on the pottery surface. The hotter the ﬁre, the more likely for breakage, so it was not uncommon for pots to break or crack, making the gunmetal pieces very collectable due to the smaller number produced. Like his father Julian, Popovi died at an early age in 1971, at just 48 years of age. 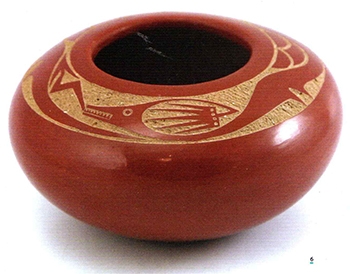 In the 1970s until 1982, Tony Da took over the mantle as the most celebrated potter in New Mexico. Pots he constructed were innovative and his designs continue to influence younger pueblo potters. His pottery style included lidded pots, multi—stone and heshi inlay adornments. Effigy pieces of elaborate turtles with lids and freestanding stylized bear figures were just some of his creations. Tony pots have sold for as much as $150,000. He learned his pottery skills at the side of his grandmother, Maria. In 1982, a motorcycle accident left Tony unable to make pottery and limited his production of pots to only 18 years. The 18th Maria Martinez show at Medicine Man Gallery Santa Fe is fortunate to have five Tony Da pots and several examples of polychrome and red ware jars. The show will be open through August 24th, 2016