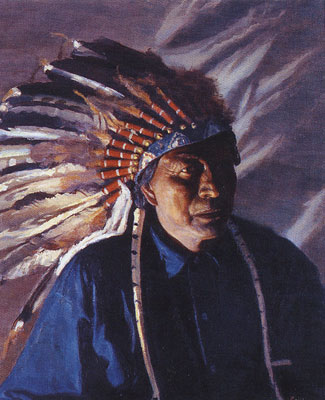 The market for historic Western art is truly an exciting and fascinating affair, whether it is works by figures like Charles M. Russell or top paintings from the best of the Taos Artists.

As the results of this month’s Coeur d’Alene Art Auction will surely tell us, the market for historic Western art can be high paced unpredictable, volatile, erratic, profitable, dramatic, fascinating and lucrative, depending on the month. But the one steady factor is that it will always be interesting and a sound investment for people who understand when to buy and how to find quality.

“It’s clearly a buyer’s market for good pictures and a very competitive market for really distinguished pictures,” says Eric Widing, head of American Paintings at Christie’s. “The best Western material will always get interest and the distinguished or important works of the best artists is going for fair prices. But, there are bargains to be had for good, decorative pictures that aren’t in the important category. Those prices are definitely lower than they’ve been and it’s a buyer’s market for that work.”

Whether it be at the Coeur d’Alene in July, Christie’s and Sotheby’s American paintings sale this past May, the Scottsdale Art Auction in April, the Altermann Auction in December or the Jackson Hole Art Auction in September, we are learning that at this moment in the market for historic Western art, quality will sell and buyers will always pay competitive to high prices for the best works by the best artists. 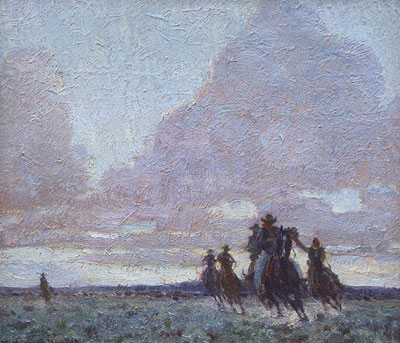 The fact that quality sells is evidenced by a number of results in the recent auction houses. In April, despite bailout talks and the stock market’s volatility, the Scottsdale Art Auction was able to sell Saving Their Lieutenant, one of Charles Schreyvogel’s finest paintings, for $1.6 million. In December, Christie’s sold In Pastures New, a work on paper by Henry F. Farny, for $1.4 million.

Earlier this winter, rumors were prevalent of a Charles M. Russell painting selling privately for $5 million to $6 million. And, while people are also afraid that this month’s Coeur d’Alene Art Auction would be down from the $35 million it did last year, the Western-based auction house stepped up and landed Russell’s The Truce, which carries a pre-auction estimate of $2 million to $3 million. Russell always captivates Western collectors but this year is proving to be a banner year for Great Falls, Montana’s, favorite son as a retrospective of his work opens in November at the Denver Art Museum and then begins touring across the country soon after. 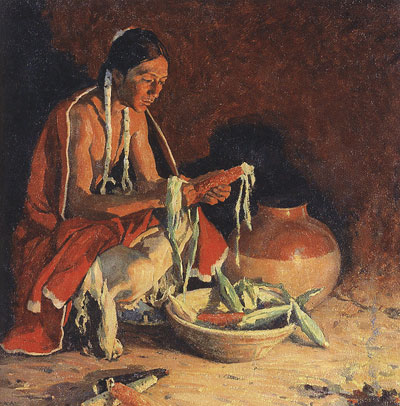 The Coeur d’Alene auction also features several top-notch works by artists from the Taos Artist Colony that will surely fetch top dollar. The Advance Scouts By Oscar Berninghaus has an estimate of $600,000 to $900,000 and E.I. Couse’s piece, Contentment, carries a pre-auction estimate of $300,000 to $500,000.

This May, Walter Ufer’s painting The Red Moccasins, which had a pre-auction estimate of $400,000 to $600,000 which sold for $752,500 at Sotheby’s sale of American Paintings, Drawings and Sculpture. And this past winter, Catharine Crichter – the only woman member of the Taos Artists – set a world record when her painting Indian Mystic sold at Sotheby’s December sale of American Paintings for $254,000 after a pre-auction estimate of $100,000 to $150,000.

Quality works by Henry Farny continue to do well at auction houses around the country. His painting, In Pastures New, sold for $1.4 million at Christie’s in December, establishing a new world auction record for the artist.

“We were delighted by the new world auction record set for Farny’s In Pastures New,” says Widing. “It’s an exceptional piece that Farny executed at the height of his career. Over the past several seasons we’ve seen interest in Western art continue to grow and find new levels. It’s an active and exciting collecting category that appeals to many American collectors, whether they live in the West, the South, the North or the East.”

“We have continued to draw a stable of collectors who realize the historic importance of these works and understand that the Western art market has not been as heavily affected as the post-war art period,” says Sublette. “Maynard Dixon’s work continues to be actively sought by collectors as has work by Taos Society of Artists. Fascination with the West, the artists and the people who captured its history has remained of interest despite the changing economy.” 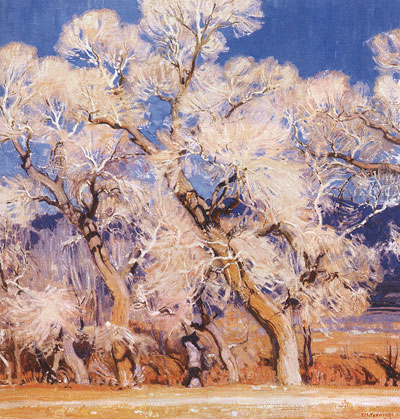 Another aspect of historic Western art is the museums that continue to mount exciting and interesting exhibitions including works of many of these historic masters. The Harwood Museum of Art’s, in Taos, New Mexico, new exhibit on Couse and Sharp (previewed in this issue) has a lot of people talking as does November’s much-anticipated Russell Retrospective.

The Taos Art Museum opened to the public in 1994 and the Fechin House in 2002. The museum was created to collect and preserve the work of the early painters who came to Taos to pursue their passion. The museum exhibits the works of the Taos Society of Artists, the Taos Society of Moderns, which was part of the original collection, the Weimer Collection, the Robert Hall Collection of Eugenis Fish Glaman as well as works from the best contemporary artists Taos has to offer. It also contains the permanent collection of the former Lineberry Museum.

“We are fortunate and thrilled to be housed in a marvelous historic home,” says Executive Director Erion Simpson. “It is truly an honor to carry out the loving legacy established by Fechin’s daughter Eya, which is to elucidate her father’s genius. The Taos Art Museum’s mission continues to focus on collecting and preserving the work of the early Taos paintings and celebrating their patrons.