Since learning their skills from Mexican silversmiths in the latter parts of the 19th century, historic and contemporary Native jewelers have elevated the craft to an elite art form.

Searching for the seven cities of gold led to 17 decades of indigenous silversmiths. In the late 1860s, after five years of forced incarceration at Bosque Redondo, industrious Navajos—looking for new methods to make a living after their herds of sheep were annihilated by the American government— turned to silver after coming into contact with Mexican and Spanish silversmiths and blacksmiths.

The earliest of the silver pieces were made not for humans but for animals. Horses to be exact. A part of the bridle known as the headstall. These pieces were not crudely made—many had decoration or ornamentation—but were simple in form and function.

Mexican silver dollars or sometimes American ones and made horse bridles, simple bracelets, earrings and not too long after that squash blossom necklaces. The earliest of these we see come in around 1870. Plains Indians used German silver to make pieces that were worn around the elbow or bicep area but the Navajo silversmiths were the first to make these other items." 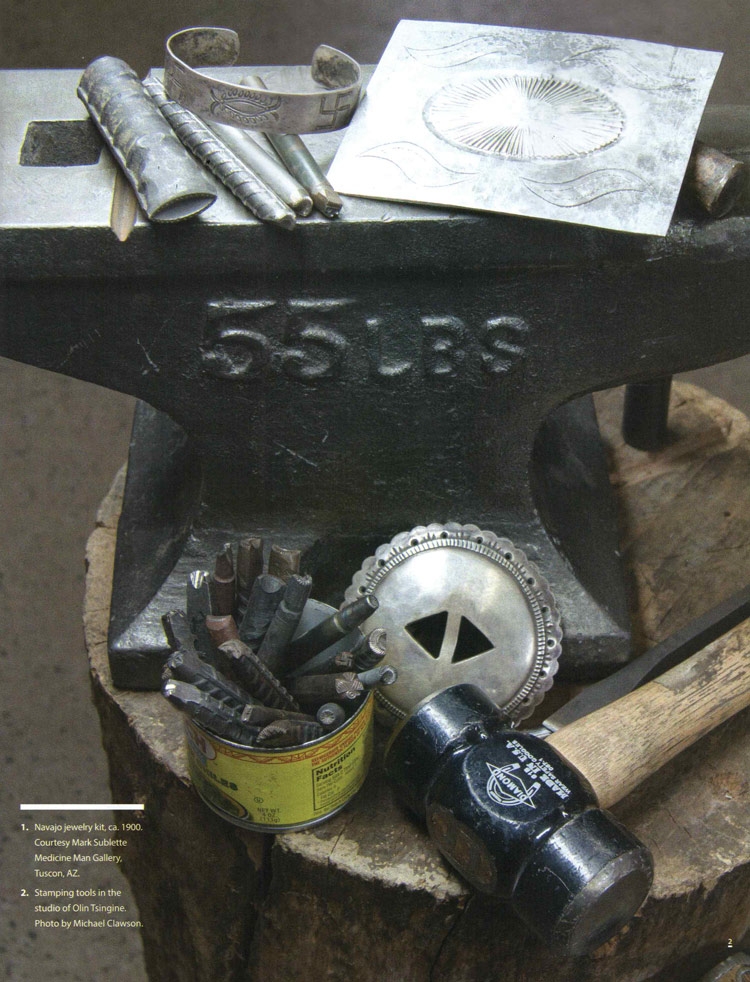 While many of the first silversmiths worked anonymously, there is some information available on the earliest of the first generation of Navajo artists. Atsidi Sani is often known as the first Navajo silversmith but he was more a blacksmith and worked mainly in iron. It is said that he was born near Wheatfields, Arizona, around 1830 and his name literally translates to “Old Smith." He is also known as being the teacher of one of the greatest silversmiths of his time, Slender Maker of Silver. Photographs exist of Slender Maker of silver and some of his pieces are still in circulation.

“The pre—turn of the century works don't come onto the market very much," says Sublette. “I see the most of anybody and I usually come across three to foura year. But you have to know what to look for with these early pieces. They are very simple, almost crude, heavier and they from ingot. And turquoise wasn’t added until around 1890. These early pieces include hand—chiseled stamps, cold chisel stamp work. And they will show a lot of wear. You need to look for the wear. These early jewelers made their own stamps. They made their own tools. You couldn't just go and buy a hammer or scissors, they had to be made. They did it all.”

Fred Peshlakai learned from Slender Maker of Silver and he, in turn, served as teacher for Kenneth Begay, who is known as the Father of Modern Navajo Jewelry.

“Kenneth Begay and Fred Peshlakai are the two greatest Navajo silversmiths who ever lived, "says Steve Begner, owner of Turkey Mountain Traders in Colorado. “Peshlakai was the first one to not only take great care with working in symmetry but he also added that idea of perfection to his work and was the first to emphasize high-quality turquoise. Most of his best work was made in Los Angeles, where he had a shop on Olvera Street."

In the late 1940s, Begay joined forces with his cousins George Kee and Allen Kee and the three worked together on the bench at the White Hogan store in Scottsdale, Arizona, owned by John Bonnell Sr. “Their skill at silversmithing has never been exceeded, and their simple yet elegant pieces, almost Scandinavian in their clean lines, remain some of the finest Indian silverwork of the 20* century,” says Begner."

Other remarkable silversmiths of the time and later include of course Charles Loloma, Mark Chee, Frank Peshlakai, Preston Monongye and Cochiti jeweler Joe Quintana. Also Juan Dideos was a Zuni artist who worked in the mid-19205 and was one of the first jewelers to ever use hallmarks. A belt of his can be found at the Heard Museum as part of the C.G. Wallace Collection and dates to 1925, quite possibly the ﬁrst piece to have a hallmark.

To many, the greatest living silversmith is Lee Yazzie. Yazzie is 71 and works out of a studio in Gallup, New Mexico. Glittering World: Navajo Jewelry of the Yazzie Family opened at the National Museum of the American Indian in 2014 and included work by Lee, his brother Raymond as well as siblings Mary Marie, Lillie, Lola, Marie, Shirley, Cindy and Jimmy B., as well as handmade silver beads by nieces Sheena and Taisheena Long.

“My greatest teacher was my father," says Lee. “He never sat me down to teach me silversmithing. His bench was off limits to us. We were not allowed to fool around with his tools because everything was furnished to him by a trader and he had to return everything, all the ﬁlings and scraps, and if anything was missing they would deduct it from his pay. But I would watch him. It was never forbidden to look. You can learn a lot by looking. Same as my mother.”

When Yazzie starts a new piece, he tries to visualize the face of the person buying the work. This helps him with proportion. But then, every piece begins with a sketch.

“I’ll do a rough sketch, really quick and then transfer that rough sketch to another paper and do it in exact measurement and then I transfer that to the metal. To the silver," says Yazzie. "At this point, a lot of changes occur and I just go ahead and let the designs dictate to me which way it wants to go. In my early years, I would agonize over trying to get it exactly as the sketch, but I’ve learned to go with the flow as they say. lt’s a rare occurrence for me to get it exactly.” Yazzie saves these sketches and then comes back to them for new and different pieces.

“I read an interview with someone and he said to never throw a sketch away, no matter how terrible it is, you should always save it,” says Yazzie. “I always observe. There is so many shapes out there. The countryside, a building, the design of a car, a person, animals. There is so much design out there that there is no reason for a person to say Tm burned out.’ If you feel that way, you need to be more observant, there are so many designs out there ﬂoating around. Waiting to be harnessed.”

Yazzie credits his greatest influence to his woodworking teacher at Fort Wingate High School about 25 miles outside of Gallup.

Another upcoming silversmith is Clendon Pete. Pete lives in Albuquerque but is inspired by his cousins Thomas and Wilson Jim. He works mainly in traditional style stamp work and makes his own stamps as well.

“What I like to think about is those early artists were Navajos who lived the traditional lifestyle,” says Pete. "And their designs came from that old style and reflected that culture. I feel my cousins do the same, with the work they do and the lives they lead.”

Pete and some other contemporary artists are drawn to the traditional ways of creating jewelry and are going back to the stamp work found in the work of the past. They pride themselves on doing every step of the work by hand, from melting ingot to even making their own stamps out of steel.

That’s the most difficult part,” says Pete. “I have over 150 stamps and I've made them all. And I'm constantly making more and feel like it’s not enough. Sometimes, I will see old designs and don't have a stamp to do it so I’ll create one that allows me to make it."

Olin Tsingine is another contemporary artist who enjoys the whole process of making jewelry.

"With carving, you have two kinds of designs,” says Tsingine. “Old Pawn, which means stamping, cold chiseling, chasing. You manipulate the silver by grabbing it, pushing it and pulling it. You chisel something in the stone and then move and manipulate it to where it is visually stimulating. And then tufa casting.”

Tufa casting is the process where artists take tufa stone and then carve the designs directly into the stone to make a mold, which then the silver is poured into. It’s an early method, as early as most of the original silver pieces made by Navajos. 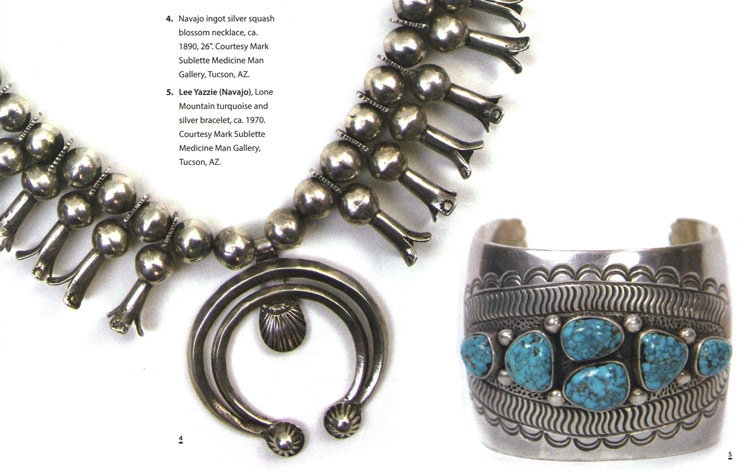 "I go out and get it on the Hopi reservation," says Tsingine. "Tufa is crushed volcanic ash. You get tufa with rock in it, tufa with dirt or twigs. But the place where I was shown to get it you get this really soft stone that is like compressed baby powder and you’re able to carve very soft designs. There’s hardly any rocks. It’s pure and compact. I find it in washes. Or in the side of a hill. It's white and the dirt on top of it will be red. You take a layer of it and then cut it out in sections with picks, shovels and long iron bars. Tufa casting means that no piece will be the same. Once you use it once, the mold typically breaks. I enjoy the experimentation that comes out of that."

Gallery owner Gene Waddell sees Tsingine as one of the bright up and comers in the world of Native silversmithing. Other jewelers of note include Darryl Dean Begay, Jesse Monongye, Carl and Irene Clark, Perry Shorty, and McKee Platero.

Faust Gallery owner William A. Faust also includes the work of Aaron Anderson and Charles Supplee as very good silversmiths and users of tufa. For Faust, though, Ric Charlie is the best when it comes to contemporary tufa casting.

“With tufa, you get the chance to pour the metal in there and then etch out the design,” says Faust. “The early silversmiths would ﬁle the rough texture off but Ric Charlie utilizes the texture as a design element. Ric just won Best of Show at the Cherokee Art Market. The ﬁrst jeweler ever to win.

Charlie finds his tufa on the Navajo reservation. “The stone I use is very durable," says Charlie. “When I get to the tufa stone, I start with a basic design and from there I start thinking in reverse, its three-dimensional, so it’s like looking into a mirror, carving out a negative to cast a positive. I like to file away and bring out the highlights, which also adds to the design of a piece. There are lots of variations; it just depends on how far you’re willing to go, how much time you’re willing to take. Because to carve a piece of jewelry so intricate takes a long, long time.” 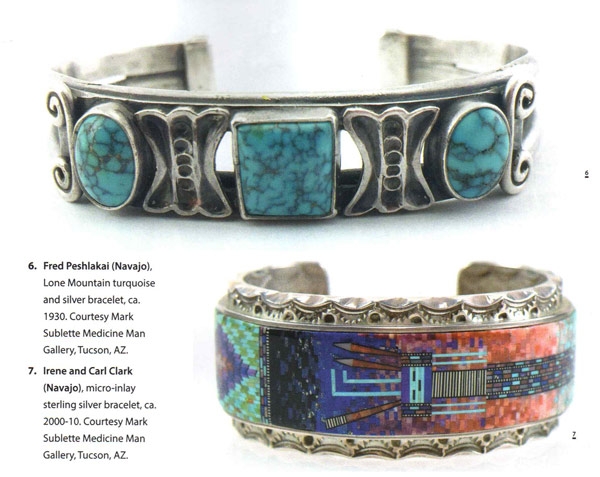