Louisa McElwain uses her fluid brushstrokes and energetic canvases to help explain her experiences both with and in nature as well as the effects that the landscapes of northern New Mexico have on her. “I am interested in exploring a way of describing my experience of places in nature without subordinating the marks and strokes of paint to the motif,” says McElwain.  “Paint and the gestures that move it are made to the rhythms of nature through time, each with its own identity as paint, yet contributing to the meaning of the work as a whole.”

Done in this signature expressive quality, McElwain opts for a palette knife instead of a traditional brush. She feels that this is the only way her true feelings for the landscape can come out. “My chosen tool for applying paint to canvas is the knife, for two primary reasons,” says McElwain. “To curb my ability to describe objects and to move paint with velocity, articulate delicacy and sensuous impasto. To describe my experience, I rely on my understanding of how interaction of color creates light and my education in drawing to establish, design, tonal weight and space.”

McElwain has spent the last 22 years painting the beauty of northern New Mexico. While her earlier work focused on the geological and natural feature of this area, her new work is more about the rhythm of the season, and her own connection to the spiritual aspect of the land.

“My deepened relationship with a few beloved places continues to entice me to paint increasingly evanescent events of nature, to take greater leaps into larger canvases, surrendering to the inquiry, and to paint with ever more trust and joy,” says McElwain. 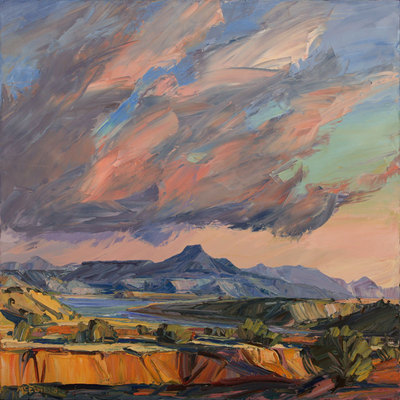 Sometimes, this relationship carries so far that McElwain wants to put actual pieces of the environment into her paintings.

“To acknowledge the simultaneous levels of reality around me, I sometimes deliberately introduce elements into the paint, like bits of broken beer bottle, bone, earth, stones, grass or charred wood,” says McElwain. “Anything stuck to the front of the canvas is part of the work.” 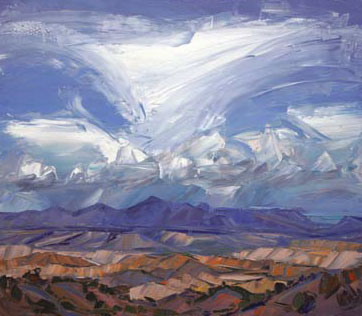 This all adds to the idea of place that McElwain is exploring so deeply in her work. This relates to the place itself as well as the idea and feeling of it.

“I love how I can see to where the land and the sky at the horizon are nearly the same color, an ineffable blue,” says McElwain. “I love how I afforded a place to behold the summer storms materializing over the Jemez. Birthed by the mountains into the chaste morning sky, the clouds explode into potent thunderheads, releasing rains. These places move me deeply.” 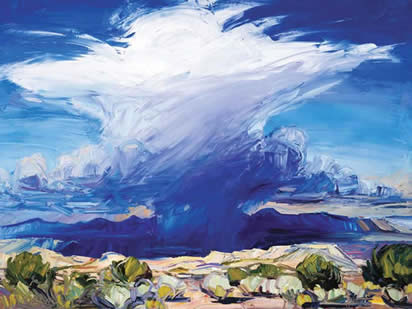