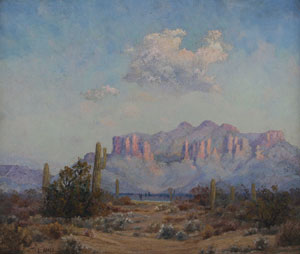 Hall Coggins was born in San Leandro, California and studied privately with the artists William Keith and Raymond Yelland.

The step-daughter of a contractor, twenty-five year old Leola Hall saw entrepreneurial potential in the housing boom east of San Francisco Bay where many families fled after the earthquake of 1906.  Between 1907 and 1912 she built dozens of Craftsman style homes in the Elmwood section of Berkeley.  Though untrained in architecture, she designed the houses, purchased the land, supervised construction, and sold the homes herself.  One of her last projects was the "Honeymoon Home" which she built for herself and her bridegroom, Herbert Coggins, an ornithologist and author.  The press of the time referred to Hall Coggins as "the Girl Architect."  Many of her houses survive and are protected by the Berkeley Architectural Heritage Association which also owns several of her paintings.

After their marriage, the Coggins owned a concrete contracting firm and a small chain of auto parts stores.  Both were involved in Progressive politics, and Hall Coggins was known as an outspoken suffragist and activist.  Upon her marriage, a local newspaper proclaimed: "Prominent Suffragette Victim of Cupid's Wiles."

Hall Coggins continued to paint throughout her short life, primarily creating detailed romantic landscapes in the style of her teachers.  She also executed a few portrait commissions including those of the poet Edwin Markham, and Stanford University President, David Starr Jordan.  Hall Coggins died of a heart condition before her 50th birthday.