Click to view the collection of Kevin Irvin fine furnishings 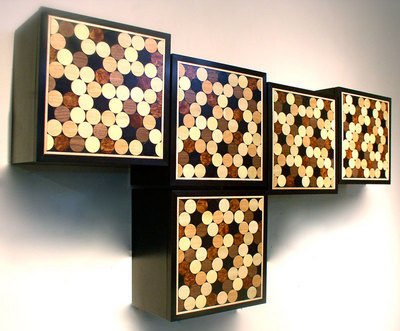 Kevin, Irvin, Coco Box, Black dyed maple plywood, black dyed koto, walnut, cherry, poplar, maple bubinga, and yellow Alaskan cedar, 12.25" x 12.25" x 8.75 " The Coco Box is one in a series of twelve styles offered in the Mod Box Series. Multiple boxes can be ordered and can be arranged in a variety of patterns.

Kevin Irvin was born in Evansville, Indiana on July 13th, 1959. Thank God it wasn't a Friday. His parents, Bill and Nyda Irvin, owned a restaurant / bar called Billy's and then The Oaks and finally the Gemeca Inn. It goes without saying that Kevin grew up in the restaurant business and to this day he prefers to have dinner at the bar.

His grandmother was the first person to encourage him in the arts. She would always introduce him to her friends as the little artist in the family. It was his grandfather however who exposed him to the wonder of tools and machines. A tool and die maker, his grandfather would busy himself with a variety of projects in his basement shop and allow Kevin to help by cutting out shapes on a scroll saw at age eight. Kevin was unable to take art classes in high school due to his guidance councelor's insistence that he concentrate on business and science.

Upon entering Southern Indiana University, Kevin majored in art. His first class, a design and materials class, was conducted in a wood shop. Thinking that he had entered the wrong class, Kevin began to exit the building when he heard his name called. When he returned, John McNaughton (his teacher and to this day a good friend) began showing slides of his work. Kevin was promptly hooked and eventually received his Bachelor of Science degree with an art major in 1982. He then attended Arizona State University and received his Master of Fine Arts degree in 1985.

Having taught as a teaching assistant and faculty associate at A.S.U., Kevin eventually realized that even though he enjoyed teaching, he really wanted to produce art full time and therefore took out a small business loan and put a studio together in 1986. 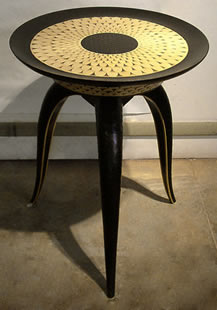 His first professional show was in Scottsdale, Arizona in 1987. Kevin went on to have numerous one person exhibitions as well as various museums and art centers. His furniture, sculpture and paintings have been collected from New York to Los Angeles and abroad. His work can be seen in private, corporate and museum collections such as McDonalds Corporation, Neutrogena Corporation, Cole Taylor Financial Group as will as the Scottsdale Museum of Contemporary Art, the Nelson Fine Art Center, A.S.U., the Evansville Museum of Art and Sciences and The Indiana Museum of Art. Kevin currently maintains a studio in downtown Phoenix and lives with his lovely wife Erin and dog Cowboy in their 1922 historic house in north central Phoenix. 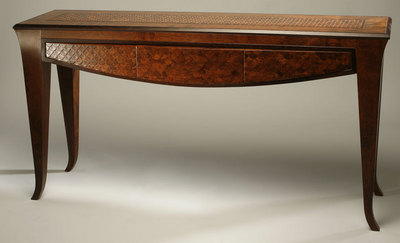 The Pod Cabinet is a stylized bomb shape from the early sci-fi movies. Part of the Segmented Cabinet Series, retro inspired table-top cabinets. The drawers of each piece conform directly to the individual case that contains it.