The Hopi Indians are descendents of the Hisatsinom, or People of Long Ago, commonly known as the Anasazi or San Juan Basketmakers. The Hopi people have lived in the Four Corners region continuously since 500 A.D., giving them the longest authenticated history of occupation of a single area by any Native American tribe in the United States. However, their tutsqua, or homeland, has shrunk to nearly 9 percent of what it once was, now comprising 1.6 million acres.

The Hopi culture is rich with tradition and history, and today it still contributes to the unique and complex character of the Southwest. Growing up in New Mexico, with parents who were research scientists and art collectors, Mark Sublette was exposed to Native American art at a young age. He has memories of frequently attending the Indian Market in Santa Fe and developing a deep appreciation for Native American art as a consequence of being around it and seeing how it was collected and sold. He gained a love primarily of Pueblo pottery, basketry, and kachina dolls. 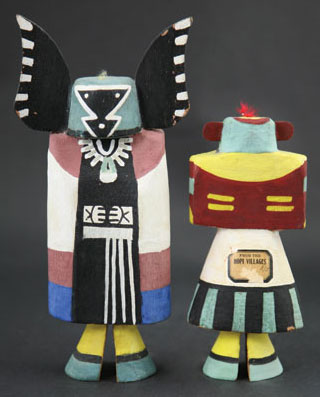 Hopi Kachina Tourist Dolls. The kachina on the left is Angwusnasomtaqa, or Tumas Crow Mother. She wears a woman's dress and ceremonial robe with green moccasins. She appears in the Bean Dance and is considered the mother of all the kachinas by some Hopi. Her Hopi name literally means "Man with Crow Wings Tied To." The kachina on the right is I'she, or the Mustard Green Kachina. This kachina has a green mask with red ears, black warrior marks on the cheeks, rectangular eyes, and a triangular mouth.

Sublette went on to become a physician with a successful practice, but he still found himself spending all his extra time, money, and energy looking for, collecting, and eventually selling Native American art. In 1992, Sublette decided to try selling art full time, and he opened Medicine Man Gallery in Tucson, Arizona. Since then, he has opened a second gallery in Santa Fe.

Collecting kachina dolls became his primary passion. He loves early kachinas as an art form - their simplicity of form combined with their importance to the Hopi people. Sublette shared with C&I his advice on collecting kachinas.

Cowboys & Indians: What is the history of kachina dolls?
Sublette: In Hopi, kachina literally means "life bringer." Kachina dolls are carved from cottonwood roots and made to represent the many figures of Hopi mythology. They can represent anything that exists within the natural world, such as an element, a quality, a natural phenomenon, or a concept. For example, a kachina could be the representation of rain, an animal, the stars, or the spirit of a dead ancestor.

Traditionally, kachinas were carved by men and given to young, uninitiated girls during the Bean Dance (Spring Bean Planting Ceremony) and the Home Dance Ceremony in the summer. The kachinas were used to teach children about Hopi mythology, the kachina spirits, and the traditions and rituals of the tribe.

The earliest kachina dolls date back to 1300 A.D. The earlier the dolls were carved, the more simplistic they are. The early kachinas were carved with arms close to the body and hands touching the stomach. The hands had no fingers and were simply carved as small clubs.

As time progressed the intricacy increased. The arms were carved away from the bodies, and by the 1940s many of the kachinas were portrayed in motion and contained intricate details such as individual fingers. By the 1960s kachinas were placed on bases with the carvers' signatures on the bottom. From the beginning bird feathers were used for decoration, but in the 1980s the bird feathers were often replaced by carved feathers, each kachina containing more detail than the last.

Aside from the Hopi, the Zuni and Pueblo tribes also traditionally carved kachinas and still carve some today. Each tribe had individual characteristics that make it possible to tell their kachinas apart: The Hopi kachinas were generally made out of a single piece of wood, with the arms of the earliest pieces close to the body. The Zuni kachinas usually had articulated arms and wore clothing. And the Pueblo dolls generally had the simplest design and were made out of flat pieces of wood with the face and arms painted on instead of carved.

C&I: What impacts the value of kachinas?
Sublette: Age plays a large role in dictating the value of a kachina. Usually, the older the doll, the more valuable it will be. Although kachinas have been made for hundreds of years, from a collector's point of view the earliest dolls available are after the 1870s. I personally focus on collecting kachinas made between 1890 and 1940.

Size and rarity also affect the value of a doll. For example, a large, early doll of a rare design will be worth a great deal more than a small, common kachina doll. Condition also greatly affects the price of a kachina. If a doll has lost most of its paint or has been broken, it will be worth less than a kachina in mint condition.

The most expensive doll sold at auction for around $300,000 but would likely have sold for an even greater price had the purchase been private. Generally, an older, mid-size kachina in good condition from the 1930s can be purchased for around $1,200 to $1,500, while a very good doll that is either rare, old, or larger will generally sell for between $8,000 and $12,000.

C&I: Where can you purchase kachina dolls?
Sublette: The most important thing to consider when buying early kachina dolls is the reputation of the dealer. Usually, the longer a dealer has been in business, the better. Also, membership in the Antique Tribal Dealers Association is a good indication of quality and trustworthiness. The Whitehawk Antique Show in Santa Fe - which occurs just before Indian Market in August - has one of the largest groups of dealers who sell early American Indian art and artifacts. This show always has a large number of dealers who sell kachina dolls.

Collectors can also begin their search for dealers on the Internet. It can lead to dealers knowledgeable in buying and selling kachina dolls.

C&I: Do you have any preservation tips for collectable kachina dolls?
Sublette: Kachina dolls should be kept out of the sun because the natural pigments used to color them can fade. Kachinas should also be checked to make sure insects are not eating their wood, cloth, or feathers.

However, the most common problem afflicting kachina dolls are pet cats. They will often knock the dolls off their shelves - sending them on a trip to the restorer. For this reason, it is important to display dolls securely on wall mounts or with stabilizing stands. The Heard Museum has the largest and most impressive collection of kachina dolls on exhibit: The way their kachinas are displayed with stabilizing stands is an excellent method to duplicate in order to prevent damage.

Beginning collectors should first spend time educating themselves about the type of art they wish to collect. Not only will this reduce the likelihood of mistakes when buying, but it will also result in a greater appreciation of the art and its craftsmen. Many collectors make their largest mistakes when they first begin collecting. These mistakes can be minimized by first familiarizing yourself with what kachinas are available for collection. The Hopi Navajo kachina at right was made in the 1930s and is a great example of an entry-level collectable. It is 8 inches tall and a part of the M.R. Tillotson collection, Grand Canyon, Arizona. Its estimated value is $1,250. In Hopi it is known by the name Teuk or Tasap.

Kachinas are typically made from the root of a cottonwood tree. The root is lightweight, affording an easy test to tell if a kachina is genuine. Genuine kachinas are made from a single piece of wood and are ligthweight; the wood is not hard and contains a few knots. At left is a Hopi Hemis kachina made in the 1940s. It is 17 by 7.25 inches and has had its feathers replaced. It is a good mid-range collectable kachina with an estimated value of $5,000. The Hemis kachina is one of the most beautiful and popular of the Hopi kachinas. The helmet has a terraced tablet, symbolic of rain clouds, and he carries a rattle in the right hand and a spring of pine in the left. The Hemis kachina is usually the principal character in the Niman kachina dance and is sometimes called by this name. The Niman is the home-going performance for the kachinas, which occurs shortly after the summer solstice to signify the close of the kachina season.

Especially when collecting high-end kachina dolls, it is important to research the available dolls and to buy from reliable and informed dealers. Antique kachina dolls are often the most expensive dolls and are commonly faked, so collectors must be careful. At right is a Hopi Nuvak'chin Mana kachina made in 1900. It is 10¼ x 4¼ x ½ inches. Its estimated value is $20,000. The Nuvak'chin kachina is also known as the Snow Kachina Maiden. She sends up a prayer for snowy weather that will provide the earth with moisture. She also appears occasionally in the Niman kachina dance. This kachina, like most early kachinas, was carved on a flat piece of wood with the details painted instead of carved. She wears a woman's dress, maiden's shawl, and white buckskin boots. She is the only kachina with an entirely white head and face. She has her snow-white hair pulled up in two small knots on either side of the head.