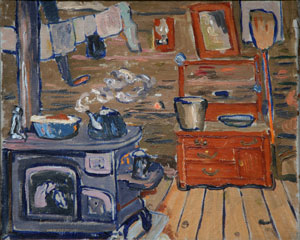 Jozef Bakos, born in Buffalo, New York, was a member of "Los Cinco Pintores," an avant garde painting group in Santa Fe. Trained in Buffalo, Toronto and Denver, Bakos went on to teach at the University of Colorado at Boulder, the University of Denver and Santa Fe High School. Multi-talented as much by necessity as choice (Los Cinco Pintores were never terribly successful at selling their work).

Bakos was also a carpenter and furniture maker whose large commissions (like that which he received from La Fonda Hotel) sustained him financially. The Pintores (Bakos, Ellis, Mruk, Nash and Shuster) dissolved after only five years, but Bakos stayed in Santa Fe and became famous for his parties and anachronistic hobbies, including home brewing.