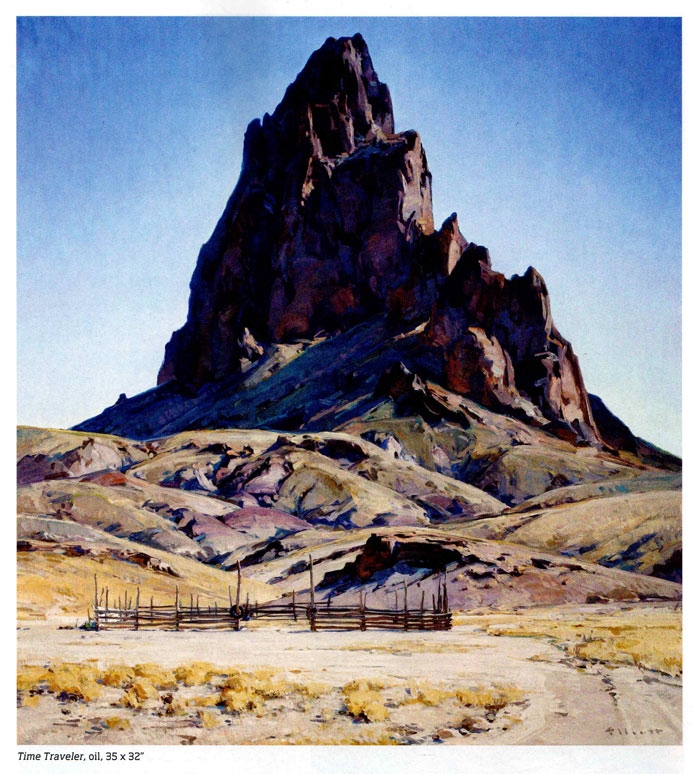 Barren fields and shallow desert valleys create howling winds and dusty vistas near Kayenta, Arizona. One can stand amid the sparse vegetation and feel totally isolated by the modern world, removed from the very fabric of time. Seven miles north of Kayenta stands Agathla Peak, a shark tooth of rock that bites 1,400 feet through the sandy desert soil. The peak was formed by igneous rock that settled in the cone of a volcano, and then the elements eroded away the volcano itself leaving Agathla, a plug of exposed earth, towering over the sage. The process was not quick – it took 25 million years.

Time is what formed it, and time is what has brought Josh Elliott to its base. In his Time Traveler, the Montana artist paints Agathla cutting high into the sky with a simple horse or sheep corral in the foreground. On a wooden post hangs an old tire, the final key element to a trilogy of time markers: the millions—year-old rocks, the century—old corral and the decades- old car tire. This is the land of the ancients, decorated by the people of today. 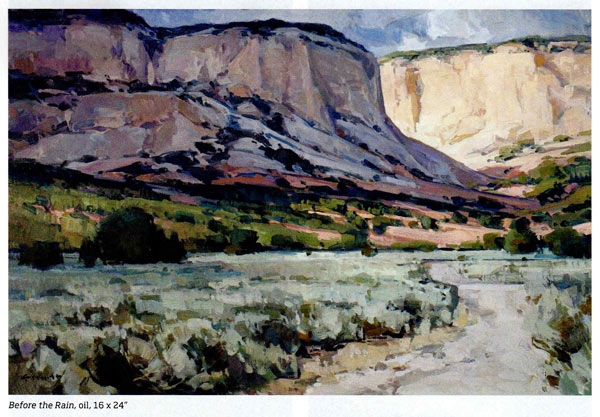 “Time has a way of really playing with you in the desert. It feels more prominent, even slower. I think it's the worn sandstone, and just all the geology,” the artist says, adding that his ideas about time in the desert were solidified after visiting Canyon de Chelly in Northern Arizona. “It’s on the Indian reservation so you're seeing a lot of ancient ruins that are thousands of years old, but then also hogans and structures that are hundreds of years old, sometimes right next to more contemporary homes and buildings. It’s a culture of time right there in front of you.”

Elliott will be presenting his new desert paintings—landscapes near Kayenta, Canyon de Chelly, Tucson and other locations in Arizona and the Southwest—in Desert Time Travels, his solo exhibition at Mark Sublette Medicine Man Gallery in Tucson, Arizona. The show opens March 9 with an artist reception from 5 to 7 p.m., and then continues through April 27. In addition to major Arizona landmarks, the exhibition will feature landscapes from around Shiprock and Toadlena, New Mexico, both important destinations to the Navajo people.

“Montana is beautiful, but we don't get the rock formations quite like they do at Agathla and Shiprock. They’re really stunning, especially as the desert stretches out around them,” the artist says. “When l start a new show I'll typically go through all my reference material or many of the books I have in my library, but really it's just going outside, traveling and seeing the land that gives the biggest recharge. The possibilities are limitless when you go out and see it all for yourself. I end up in a position where I see so many great things that the drive back is consumed with me just thinking about the paintings I’m going to start when I get back to the studio.” 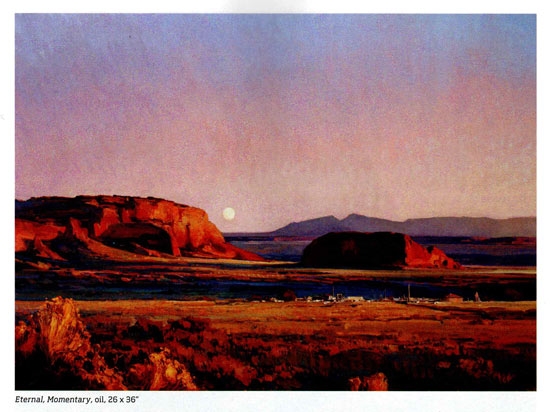 Works in the exhibition include the Canyon de Chelly scene Living in the Land of the Ancients and Eternal, Momentary, both of which show Elliott’s large views of desert locations but with hints of life that spring forth from a cluster of trees or at the edge of a long shadow. In Living in the Land of the Ancients, a tall, red rock cliff reaches high above the canyon floor, where a small and very modest home and shed are nestled within fall foliage. “This is based on a composite of scenes I saw in the canyon, but one thing that was really present there at the home, and something I wanted in my painting was the basketball hoop, which you can see off to one side near the center of the painting,” Elliott says. “Of course there would be a basketball hoop down there. If you were spending summer down in the canyon you’d need something to do. And the hoop also gives the scene scale and shows you it's a real place where real people live.”

For Eternal, Momentary, Elliott uses half the painting for a blue and pink sunset-colored sky, and the other half for a shallow valley streaked with shadows raking past glowing rock faces. The painting could be a distant cousin to Ansel Adams’ famous photograph Moonrise, Hernandez, New Mexico, which also shows a large and expansive sky, with low—hanging moon, above a desert town. Elliott's painting is rich with color and, where needed, detail, especially in the line of structures that are framed inside a shadow that stretches the width of the painting. “This one, for me, was all about the quality of the light. I wanted it to give you a sense of place, particularly since these people live in an absolutely beautiful place,” he says. "I added human elements but I didn’t want you to get the buildings on the first pass.”

Elliott, whose work has been featured at major exhibitions around the country, including at the Prix de West at the National Cowboy & Western Heritage Museum and the Quest for the West at the Eiteljorg Museum, says he strives continuously to offer unique views of the land and its features. The process can be daunting. 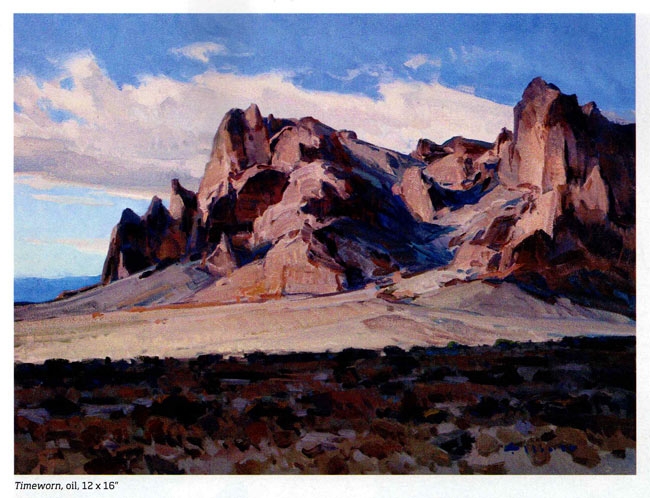 “Painting is risky. It’s tough to explore possibilities, especially when there are outside elements such as deadlines,” he says. “And then there is just you, the artist, getting in the way. I can talk myself out of ideas in a hundred different ways. ‘I don't have the frame for that,’ or ‘I don't have the panel for that,’ or ‘I did something like that last year.’ Sometimes painting is finding an idea that will survive all those filters and then take it to completion. Painting is not only that but also problem solving—taking an idea and letting go of all that is precious and adding things that are a little risky.”

Elliott, like many of his contemporaries, seems to have found a voice through his art. His landscapes sing in a way that only one of his works can. "As an artist you want to say something that’s uniquely you,” he says, unsure of how he, or any artist, truly finds that voice. “I used to look in books to get inspired, but after you look at a book long enough you realize an important lesson: you have to put down the book and go out and paint. Out there is where you'll figure it out.”