Like Maynard Dixon and other landscape painters before him, the desert of the Southwest has captured Josh Elliott's attention. Best known for his Montana landscape scenes, his latest body of work the artist explores parts of Arizona and Utah, including Canyon de Chelly.

"The desert provides opportunity for big simple shapes with the rock formations," says Elliott. "The desert presents different opportunities with lots of color harmonies and simplified forms. That's been fun to explore."

The new material is fitting for his first solo show at Mark Sublette Medicine Man Gallery in Tucson. The show opens Friday, March 18, with a reception from 5 to 7 p.m. with the artist present.

Living in Montana, Elliott is used to more blues, but in visiting the Southwest he discovered more reds, due to the iron mineral content in the rocks. The artist found Canyon de Chelly in autumn especially inspiring. The new piece titled "Canyon Echoes" is based on a plein air study he did while painting in the unique canyon in 2009. This larger interpretation reveals subtle value shifts while offering a pleasing arrangement of shapes. 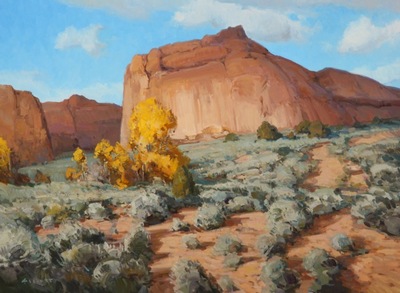 "I'm getting better at observation. I'm looking for bits of color and subtle value changes," notes Elliott. "Working on a larger piece you have more time and more room. The sense of vastness of the canyon is more successful in the larger canvas."

Similarly, "Evening Shadows" conveys subtleties of colors and values. Based on the Vermilion Cliffs area near Page, Arizona, the expansive piece captures the remote landscape of this amazingly colorful escarpment that stretches over 30 miles.

"It has a nice color harmony to it and I like the transient light of the late evening and sliver of light from cloud shadows," says Elliott. "It's a contract to "Canyon Echoes" with its big dark shapes and cliff walls, which convey strength." 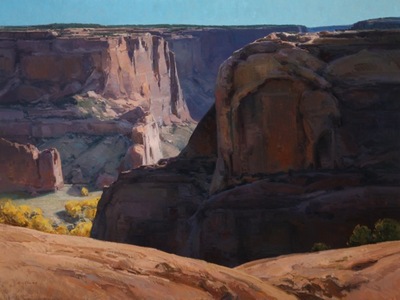 This latest grouping represents Elliott's continued enrapture with the painting process rather than subject matter. As he refines his craft, he ackowledges he's more selective in what he paints and in what he presents to the public. He also has noticed a refinement in his drawing skills and increased attention to subtleties of colors and values, qualities he hopes collectors recognize in the new work as well.

"I have a better idea what will work when I'm selecting a scene that in the past," says Elliott. "I challenge myself more often to grow and not be stagnant. I'm always looking for new ideas."

This talented award-winning artist has been juried into several prestigious national exhibitions, including the "Prix de West, Quest for the West," and "American Masters" at the Salmagundi Club in New York City.

"Only a handful of living artists can truly capture the emotional sensibilities of the West and its people; Josh Elliott is one of those artists." - Dr. Mark Sublette, president, Mark Sublette Medicine Man Gallery