Josh Elliott: Landscapes of the West 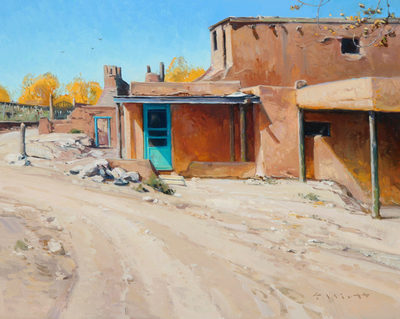 osh Elliott recalls learning to paint landscapes in his youth with his father, wildlife artist Steve Elliott. He learned the importance of painting from life and discovered his passion for painting outdoors, which he continues today.

For the past 12 years, Elliott has been honing his artistic skills. His latest paintings reflect his exploration of compositions, light and dark values, and how the eye moves across the canvas. Elliott finds himself inspired more by the painting process than by subject matter. 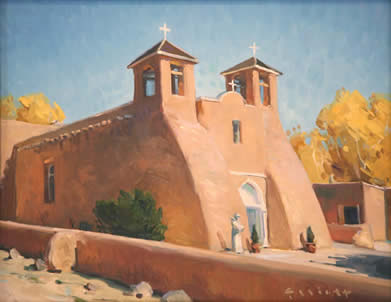 “I see my job as a painter as pointing out the beauty everywhere,” says Elliott. “I hope the joy in creating and the process shows in my work.”

His new landscape paintings are a variation of past works. Images will include scenes from his native Montana as well as parts of Wyoming and New Mexico. Collectors will notice more tonal images with tighter values, some bright sunlit paintings, and two nocturnes, a fairly new subject for Elliott that he plans to continue. 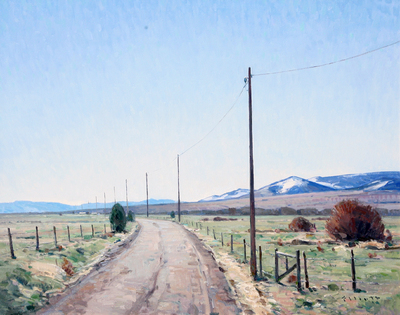 “I’m excited with it. Exploring new ideas and approaches charge me up,” he says.

Elliott depicts mostly untouched landscapes and occasionally will add a human element to illustrate man’s relationship to the land. Some of his paintings suggest a narrative while others simply convey the beauty of nature. In one of two nocturne scenes, titled Midnight Breeze, Elliott places a sole figure as the focal point, beckoning the viewer to develop their own story line.

“I’m exploring nocturnes, starting with New Mexico scenery this time. I’ve been exploring that and gradually working larger,” the 35-year-old artist says. “In this painting I added the figure to bring the piece together.” 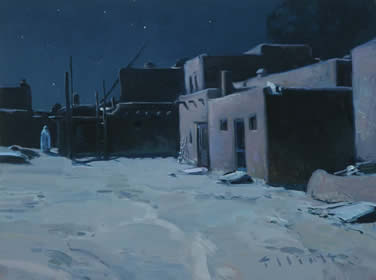 In the piece titled February’s Blanket, Elliott tackles the challenging subject o snow with its close values. In this tonal painting, he uses strong design and color variations to lift the scene from ordinary to exciting.

“Someone could pass this scene everyday and not notice it. When I saw it on this day, it was extraordinary with the fresh snow and deep blue shadows. It tells a narrative because someone made those ruts,” says Elliott.”

Elliott experiments with a low horizon line in another painting titled Midwinter featuring a grain elevator and a big sky. 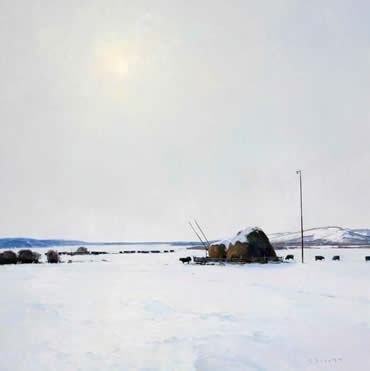 “The manmade structures are in contrast to the natural landscape. With gray overcast lighting, it creates a tonal image and makes the building feel like they belong there,” says Elliott. “This is the landscape of a lot of working people in Montana. They see it everyday.”

Elliott has won several awards, including the Honorary Chairman’s Award in 2007 at the C.M. Russell Art Auction and the Edith Hamlin Award at the 2007 Maynard Dixon Country Show in Mount Carmel, Utah, among others. This talented young artist enjoys depicting shared experiences and says he paints because he loves it.
“I like to share a common experience or introduce them (viewers) to one of mine,” says Elliott.