Josh Elliott: In the Backcountry

JOSH ELLIOTT holds fond memories of accompanying his family to gallery and museum art exhibitions when he was a child. “My brothers and I were the kids running around at the openings and eating all the hors d’oeuvres,” Elliott jokes. The Montana landscape painter, who is the son of wildlife artist Stephen Elliott, recalls that art was a ﬁxture of his early life. Paintings blanketed the walls and sculptures graced the tables in his home. Art supplies were abundant, and all three Elliott brothers painted. “Being an artist in our family was as normal as being an accountant,” he says.

These days Elliott still attends many openings. But now his contemporary impressionistic works are the ones on the walls, and he is far too busy greeting collectors to hang out with the appetizers. As this story was going to press, the artist was buried in his studio ﬁnishing paintings for his upcoming show, Desert Time Travels, which opens on March 9 at Mark Sublette Medicine Man Gallery in Tucson, AZ. “josh loves the Southwest and has spent endless hours in the backcountry, painting and researching subject matter for the show,” says Dr. Mark Sublette, president of Medicine Man Gallery. “He traveled to the Navajo Nation, camped out at the bottom of Canyon de Chelly, and spent time at the historic Toadlena Trading Post. He gathered hundreds of photos and [did] numerous painting studies to be able to bring us a remarkable body of work.” 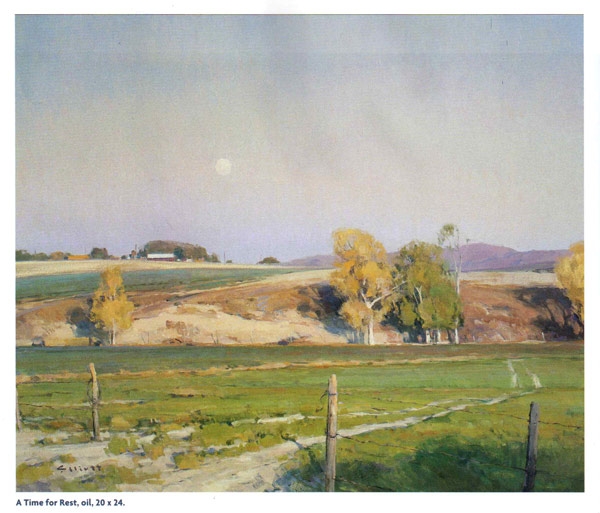 For Elliott the Southwest’s terrain offers a provocative mingling of ancient and modern. Eroded sandstone forms and 200-year-old saguaro cactuses mix with telephone poles and paved roads. “You can’t help but feel the sense of time in the desert,” Elliott says. “I want to convey that idea with paintings in the show that depict contemporary Navajo home sites, as well as the multiple generations of dwellings that are prevalent on the reservation, where old hogans [traditional dwellings] exist amid trailer homes.”

LIKE MANY westerners, Elliott feels a deep respect and awe of Mother Nature’s handiwork, which is a guiding force in his paintings, whether he’s portraying the Grand Canyon or Glacier National Park. Born in 1973 in Great Falls, MT, the artist grew up outdoors—exploring the woods, ﬁshing in creeks, and, for a brief spell, hunting. But he is a self—described poor hunter. “I was always looking at the light on the mountains,” Elliott says.

Today he counts the West’s striking light and backcountry roads among his favorite subject matter, and he relishes portraying the theme of “man against the elements.” For example, in THE GOOD OL’ DAYS ARE NOW [see page 40], Elliott depicts a man walking alone through a vast mountain landscape, dwarfed by his surroundings. To further emphasize the majesty of the natural environment, Elliott chose to render the scene on a 5—foot—long canvas that displays his mastery of high drama.

But there is even more to the work than its convincing drama. A layered message and history comes into focus when Elliott speaks about the painting. The man depicted in THE GOOD or DAYS ARE NOW is artist T] Lynde, a friend of Elliott’s with whom he paints several times a year. The scene depicts Lynde returning from an off-trail jaunt to discover unmarked lakes in Rocky Mountain National Park.

Twenty years ago, when Elliott first met him, Lynde was painting the back alleys of Butte, MT, a former copper-mining boomtown. Lynde often carried a business card with the tagline, “The Good Ol’ Days Are Now.” The phrase stuck with Elliott and, over the years, it has evolved into a sort of informal philosophy of art.

So while Elliott’s father was the most significant influence on his career teaching him how to paint on location and about values, color, and composition - Elliott says that Lynde also taught him something crucial: that modern times are as beautiful as days gone by. “I always go out with the feeling that the good ol’ days are now, and that is rarely lost on me,” Elliott says. “It is about embracing what is rather than wishing for something that was or even what is to come.” 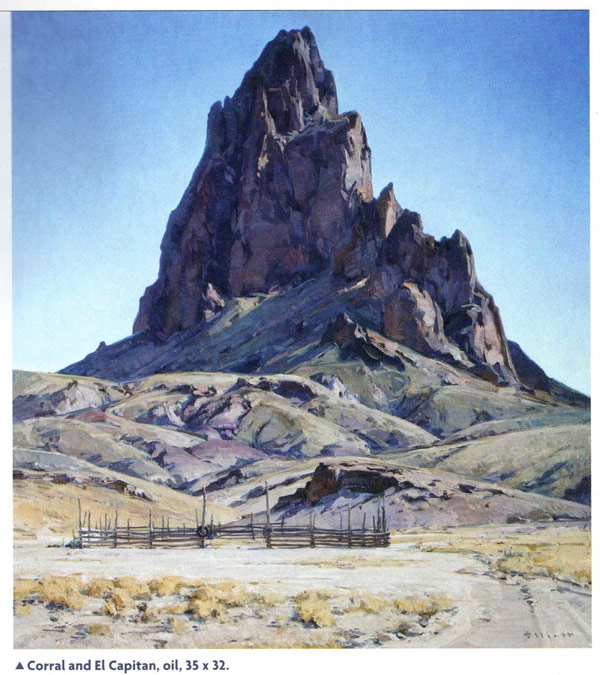 In Elliott’s view, looking backward nostalgically can lead to a saccharine or overly sentimental outlook, resulting in artistic cliches. For him, gritty realism doesn’t have to be depressing but can express other sentiments like journeys, struggles, triumphs, or feelings of belonging. In other words, gritty realism can express the human condition.

Likewise, a romantic sensibility can spring from images of roads, ranches, and utility poles. “While much of my work displays these elements of contemporary life, I also paint plenty of unspoiled nature—and much of that is made available to me by the taming of the West,” Elliott says. “The roads, trail systems, and national parks all help me harvest beauty for my work, and for that I am grateful.”

Elliott studied art briefly at the University of Idaho and at Colorado State University, but days spent painting with his father form the basis of his education. Bill Rey, owner of Claggett/Rey Gallery in Vail, CO, has known Elliott since his father joined the galleryin 1991. The younger Elliott was still in high school at the time. A decade or so later, Rey invited josh to show at the gallery. “In 2002, Josh was creating wonderful small paintings from life,” Rey recalls. “They had such a creative truth about them.”

In the years that followed Elliott began to receive invitations to prestigious shows, such as Western Visions at the National Museum of Wildlife Art in Jackson, WY; the Prix de West Invitational at the National Cowboy 69: Western Heritage Museum in Oklahoma City, OK; and the American Masters Exhibition & Sale at the Salmagundi Club in New York, NY. His paintings are now held in the permanent collections of museums. “What I see in the paintings of josh today is the sophisticated paint quality of a master,” Rey says. 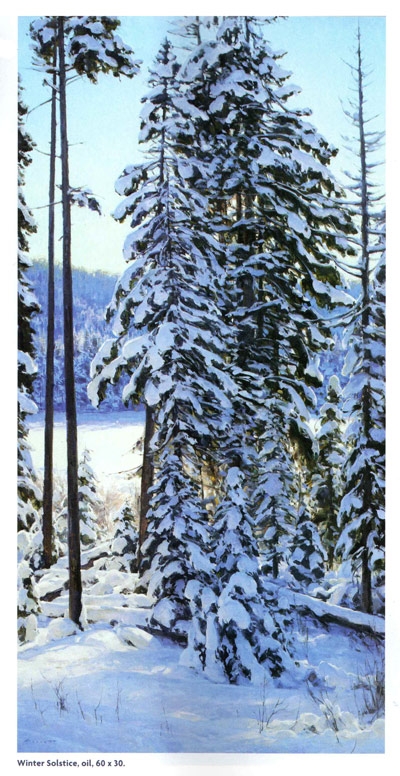 “Many artists roughly his age paint so very thin, and those works will not hold up in 20 years. With josh his work will stand the test of time. He is not chasing trends or the market. He keeps it fresh and exciting. He puts in the miles, wakes up early, and stays up late to get the research necessary.”

STEP INSIDE Elliott’s studio in Helena, MT, not far from the home he shares with his wife and two daughters, and you may hear indie rock music ﬁlling the air. It’s the artist’s music of choice when he’s blocking in images in the initial stages of creating a painting. “This helps me move quickly and intuitively,” Elliott says. “This stage is exciting to me, as it is full of possibility, and I usually play music that matches this feeling, like the bands Yeasayer and Midlake.” If visitors stop by later in the creative process, they may hear an audio book.

In December, while Elliott was completing CORRAL AND EL CAPITAN for his upcoming show, he listened to Rock With Wings, a mystery by Anne Hillerman set in the Southwest and featuring descriptive passages about desert terrain like Monument Valley and Canyon de Chelly. “I usually listen to books when I know a painting will take me a long time. It’s like settling in for a long ride,” he says. “I can look at one of my paintings and remember which book I was listening to. Even certain parts of a painting recall a specific passage in my mind.”

But for WINTER SOLSTICE [see page 43] the artist chose to listen to the audio book Ready Player One, a dystopian science-fiction tale by Ernest Cline that has no obvious connection to the painting’s subject matter, a snow-covered tree in Montana’s Swan Valley. Elliott believes that his paintings should be about ideas, not just snapshots of scenes. In the case of WINTER SOLSTICE, one of his artistic missions is to convey a sense of the eternal while still portraying a speciﬁc location and sense of place. “The painting evokes a sense of time and something eternal, with the title that ties it to an event that happens around the world throughout generations,” Elliott says. 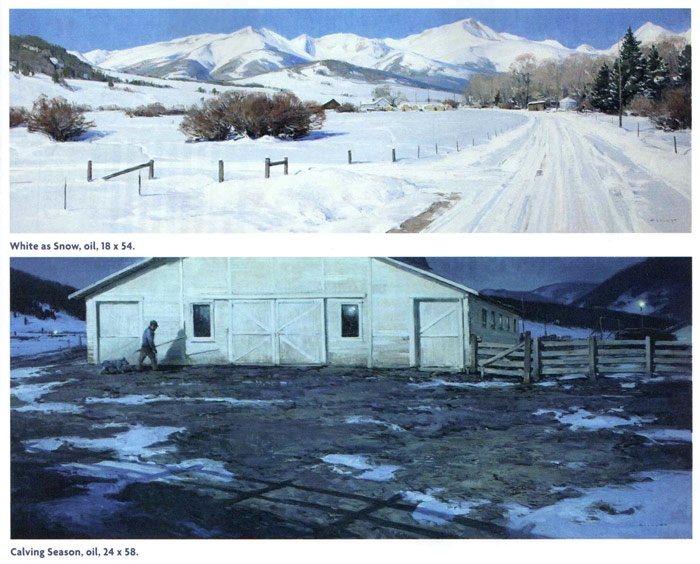 The artist’s signature talent for capturing the feel of winter is evident in the award-winning work WHITE AS SNOW. If viewers can feel the sizzling heat of Elliott’s deserts, they are just as likely to feel a chill in their bones when perusing his snowscapes. His ﬁnely tuned sense of color, honed through countless hours spent on location, thrusts viewers into the winter climes. Referencing the title, Elliott points out that snow is rarely just white but features many color shifts. “The challenge comes from trying to portray those shifts without getting too colorful, so  hat the snow holds its overall feeling of being a blanket. Snow is a million variations of gray,” he says. “The snow in WHITE AS SNOW is not white. It may be described as white, but if you were to isolate a section and compare it to a true white, you would see that most of it is a purple-gray, blue-gray, or pale yellow.”

Regardless of the subject matter, when Elliott is asked what he is trying to convey in his work these days, he provides a simple, down-to-earth answer: He Wants his paintings to be “relatable,” he says. “I often have people say to me about a painting, ‘That’s just how it is.’ And I like that.”

Bonnie Gangelhoff is a contributing editor at Southwest Art Magazine