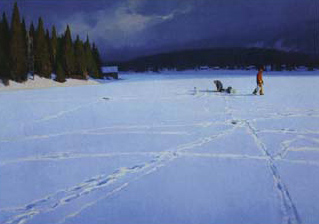 More than many of his peers, Josh Elliott is a painter of place. He was born in Montana, and he lives and works there today. The state’s renowned “big sky,” its expansive forests, its prized trout streams, and its wondrous Rocky Mountain heights offer him phenomenal raw material and continual inspiration. But Elliott’s success is not simply a matter of an artist painting the landscape he is lucky enough to have in front of him. Elliott spent most of his years between early childhood and artistic maturity elsewhere in the West.

He learned the fundamentals of paining in Colorado and did his first serious plein-air work in Oregon. He has painted many distinctive locations with a knowing sensitivity, from Taos to Maine’s Penobscot Bay. In fact, it is perhaps because of years spent elsewhere that Elliott is most at home setting up his easel in his native state, “We were meant to be here,” he says simply, affirming that Montana is his family’s true home. 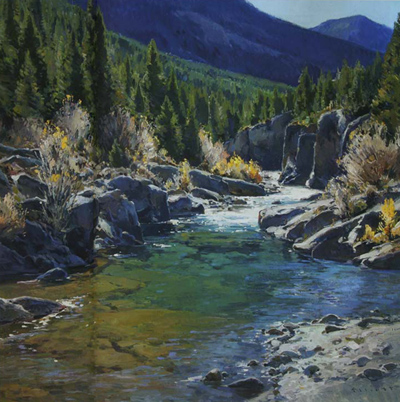 But even more than the picturesque aspects of a scene, Elliott is most interested in the puzzles that painting the landscape presents. In Clearwater Winter, for example, the artist turns away from the obvious drama of Montana’s scenic grandeur and instead paints a quiet stream. Water ripples as it flows over rocks. The big sky is seen only in reflection on the surface of the water, stately pines are mirrored in the stream, and snowy postcard summits are but a mere suggestion. No horizon defines the space. With most conventional bearings absent, almost the whole solid world is seen upside down and suspended in shimmering liquid.

“I had seen other artists do paintings like this and solve the problems in them,” says Elliott, who brings a palpable curiosity to painting. “Water is a complex subject. What excited me was working out these challenges.” He admits that at one point he didn’t think the painting was going to work. “I began this piece as a study of water and painted the water alone first. But it wasn’t until I painted the banks that it began to come together. One of the keys to the painting turned out to be determining the subtle changes in value that differentiate the snow on the right bank from the palest surface of the water next to it.” 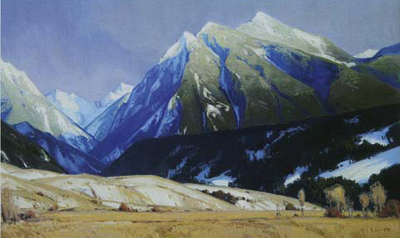 What challenged Elliott in creating this painting is ultimately what pleases the viewer – how the subtlety of the whites in snow and stream quietly reaffirms reality. He could have used more obvious means, but he prefers reticence. “Painting is like music that way,” he says. “The beauty is what’s held back.”

Born in Billings, MT, in 1973, Elliott has been drawing and painting since “before memory.” His father, wildlife artist Steve Elliott, was then an emergency room doctor with a passion for painting. This passion transferred directly to young Josh and his brothers. “I had no idea of becoming a painter,” says Elliott. “My brothers were actually better than I was. But I’m the one who made it my career.”

Elliott’s path to his life as an artist was circuitous. On the one hand, he had the example of his father, who left his medical practice in Billings and embarked on a successful art career in Colorado, often painting with his friend, well-known landscape artist Clyde Aspevig. On the other hand, Elliott entered an art degree program at the University of Idaho but failed to find an environment he could thrive in. “I wasn’t learning what I needed to know,” he says, “and I was being told that what I wanted to paint – landscapes – wasn’t worth doing because ‘it’s already all been done.’” So he opted to leave school and go to Colorado to study with his father. “I wanted to learn the fundamentals and my father was willing to teach me and to give me hands-on, one-on-one help. He paid more attention to me than anyone else would have, and also was far gentler.”

Even after this intensive, informal study with his father, Elliott wasn’t sure he’d be able to make painting his life. He studied film for a while at Montana State University in Bozeman. Then a gallery showed interest in his work, and he returned to painting. When his wife, Allison – a fellow native Montanan he’d fallen for at the University of Idaho – was offered a job teaching orchestra in Salem, OR, they moved to the Pacific Northwest. He spent the next six years painting full time.

Gradually, his drawing skills improved. His compositions increased in complexity and became more dynamic. Still, says the artist, “It didn’t seem like it was going to work.” He filled out an application for a job as a school bus driver, figuring it would provide some income while leaving hours free for painting. “They rejected me for lack of experience,” he laughs. 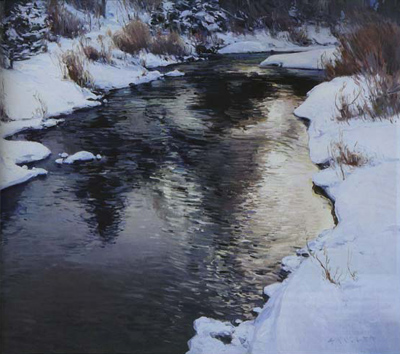 Both Elliott and his wife missed Montana and felt the pull of home. They moved to Helena, where Allison got another music job. He filled out more applications for driving a school bus. He also began approaching galleries, not by sending out sheets of slides but, on his father’s advice, by talking in person with the owners and carrying his paintings with him, already framed. “Essentially,” says Elliott drolly, “my fear of rejection by galleries wasn’t as big as my fear of acceptance by school districts.” 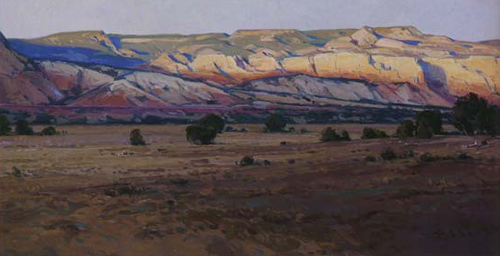 Ultimately, the move to Montana had the effect he desired. Buoyed by a sense of ineffable rightness of the place, and armed with his years of learning and experience, he began to paint with greater authority. His luck finally changed, and when it did, the good luck kept coming. He was accepted by a gallery, had a successful show, and was gradually picked up by other galleries. He started to win awards. In 2005, at the age of 32, he was invited to participate in Tucson Plein Air, where he received two awards, one of them the Maynard Dixon Award. He has since gone on to garner other prizes, including awards from the Western Rendezvous of Art, held each year in Helena, MT; the C.M. Russell Art Auction in Great Falls, MT; and the Quest for the West show, which is put on by the Eiteljorg Museum of American Indians and Western Art in Indianapolis, IN. 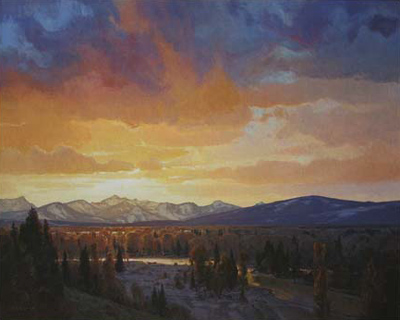 Once these things started happening, his network of contacts widened dramatically. “I got to the point where I didn’t have to strive to get opportunities; I could focus purely on quality,” he says. You can see that focus in Subzero, in which two ice fishermen are out on a snow-covered lake. Tracks in the snow lead the viewer’s eye into the scene, where a splash of red snowsuit grabs your attention. The deep foreground of sunlit snow and the glowering darkness of the sky in the distance give the picture a crisp, wintry quality. You can practically feel the cold vastness of Montana.

Elliott’s studio in Helena is right next door to his house. His north window looks out not on distant peaks, but directly into the room where his two daughters, now 2 and 4, play. He does less plein-air work these days, partly because he doesn’t like going off on painting trips and being away from his family. Instead of chasing the light, he finds the studio environment more conducive to the ideas that most interest him in landscape painting – puzzling out problems and making the myriad decisions that go into a single picture. He paints with a confidence stemming partly from knowing that he is home – right where he’s supposed to be. But he only got there by first going elsewhere. “I paint this landscape better,” he reflects, “for having started painting landscapes very different from this.” 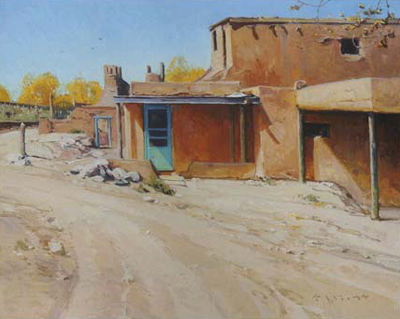