Listening to Montana artist Josh Elliott describe his approach, it seems that each development in his career, and each decision in his painting process, ﬂowed freely. What can we learn from his journey? 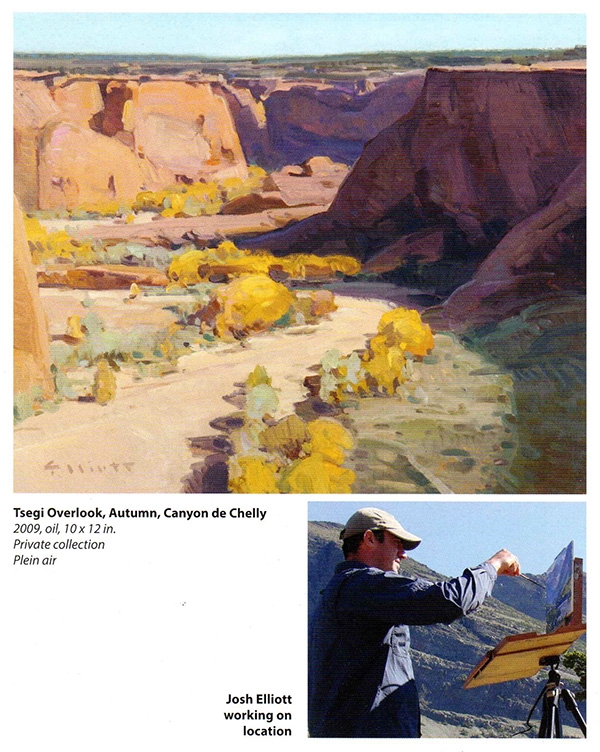 Josh Elliott used to be a plein air warrior, and he has evolved into a studio painter who still values time in the ﬁeld. Elliott tells us the evolution was natural.

“The nature of plein air painting has changed for me,” says the Montana artist. “I was exclusively outdoors for the ﬁrst ﬁve or six years of painting, just going to the source and getting the information there."

He adds with a laugh, “I should be grateful that I was learning before digital cameras. Developing ﬁlm was expensive, so I painted on site to get the information. But things change.” Now, Elliott uses plein air painting in sometimes surprising ways. He recalls a trip a while back to Canyon de Chelly with his painting buddy Taylor Lynde. Their plan was to concentrate on nocturnes, and they scheduled the trip to correspond with a full moon. But Elliott got additional nocturnes out of the trip. “Back home, I used the colors I put down from my nocturnes to inform a daylight photo I took down in the canyon,” he says. “I had the colors at night from my plein air piece, and the scene from the photo, and used them for a nocturne studio piece.” 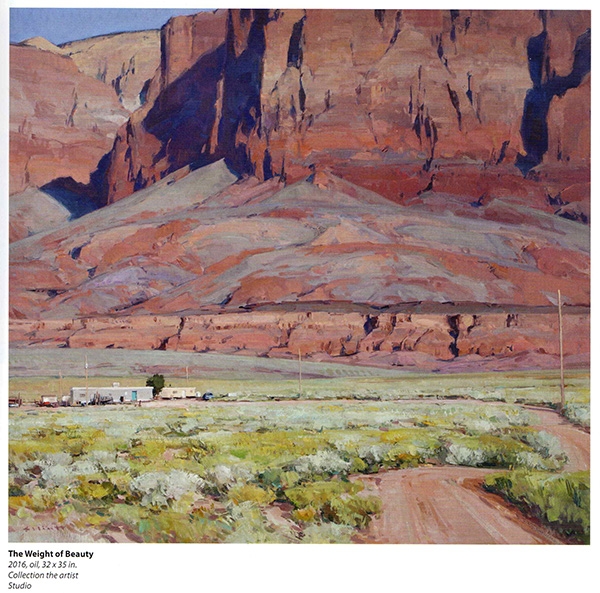 To some extent, Elliott’s move from almost entirely plein air painting to mostly studio painting is a move from direct observation to a synthesis of direct study, imagination, and experience. He suggests that while painting outdoors is freeing, it is also restricting. “Plein air painting is a reaction to what is in front of you,” he says. “Because of that, it is harder to make decisions to leave a tree out that doesn’t add to your composition. It is more spontaneous, while studio painting is more reflective, a more formed idea. There’s an impact  on a large-scale painting that I just can’t achieve on a smaller one — or a different impact, at least.

“Ones not better than the other, but for me, plein air is a tool to sharpen my skills; it is exercise. If I am getting stagnant in the studio, or my colors are off or values too contrasting, I know I need to get out and do more study. Plein air is my roots. The truth is, it’s hard to paint landscapes and not get out there and paint outdoors. Also, when I ﬁrst started out, we didn’t have kids, but with kids in school, extended paint trips are harder. I was bringing my paints out on family vacations. So then my kids are out playing in the ocean, and I see them while painting and would think, ‘What am I doing?’” Elliot laughs. “It’s hard to not paint while around beauty, but landscape painters need vacations too.”

His shift in focus is, once again, natural. Even the strictest plein air painters alter the scene somewhat. Elliott is no different — he just takes it further. “I do change things around,” he says, “but I make sure they have enough of the truth. But the ultimate goal is to make a pleasing picture. That’s what you learn right away, as a plein air painter. If you always put the tree in there because it was there, you see that it ruins your composition.”

Elliott is busy. He paints for major shows such as the Prix de West, and he participates in competitions and events, all the while taking trips to paint and gather reference material. And he still has his family obligations. But he is searching, and growing. Ask him where he is headed, and you again encounter a spirit interested in moving forward, but not limiting that growth with ﬁnely delineated goals and strict rules. “The main thing is to always improve,” says Elliott, “but it’s hard to put your ﬁnger on what to work on. I’m deﬁnitely trying to paint ideas, and get away from just recording what I see. I’m interested in the manipulation of the scene, editing or changing aspects of a scene, like a sky. Trying to get it to ﬁt my idea.” 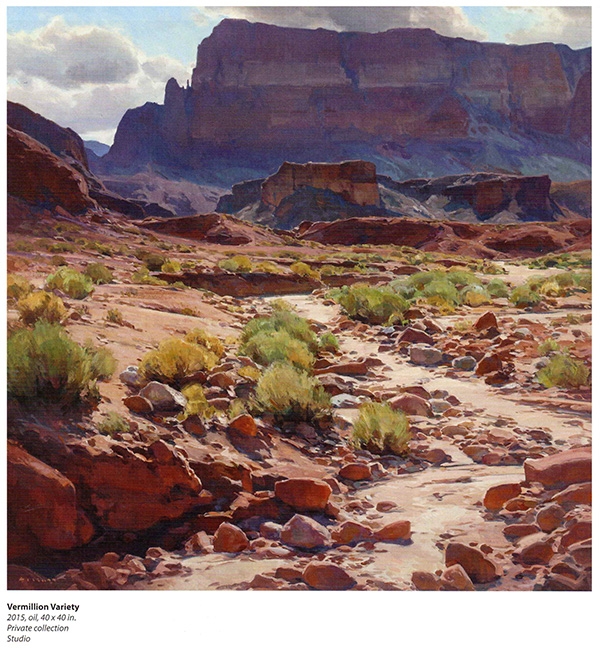 That idea can be something technical and tangible, or something emotive and esoteric. “I’m always paying attention to painting texture, and aiming for a strong sense of light — even if it is diffused,” says the artist. “Sometimes it is exclusively about the light, or this color against that one. In one recent painting, the mountains were covered in snow, and even though they were front—lit and relatively flat, I was so taken by the bright white snow against a deep blue sky that it became the main idea in the painting. Paintings may be some descriptions of ideas that are iconic, poetic, or tonal. And when I paint for a show, I think about that, which means I want a variety of sizes, shapes, colors, and ideas.”

Beauty counts, but Elliott isn’t utterly seduced by mere prettiness. “I am aiming for truth — not just truth in color, but also what I experience,” he says. “That means painting telephone poles, roads, and buildings. It’s the truth because it’s what is there in front of me, and I don’t think it takes away from the beauty one bit. We are inhabitants of this planet. There is the evidence of it.”

He goes on, “I painted the trailer houses on the Indian reservation near the Vermilion Cliffs in Arizona. All the people Visit there for its beauty, and I, too, went there and didn’t think about what a harsh reality it is to live there. Then I saw it, and I painted it in. A lot of history is not so pretty to look at. I titled that painting The Weight of Beauty. A beautiful place to us is a different reality for people who live there. Now, I didn’t provide a lot of commentary, and that painting is wide open for people to think what they want, environmentally or politically. But I painted the truth.” 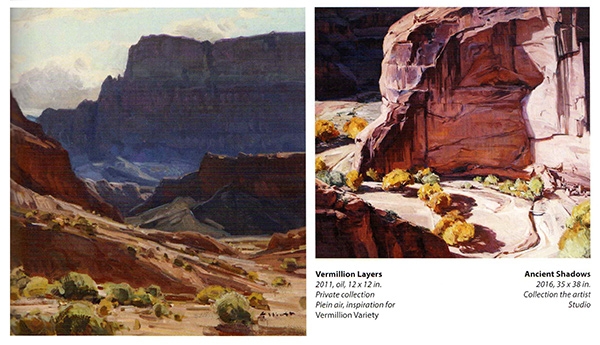 In terms of process, Elliott reveals that he works similarly whether he is outdoors or in the studio. “I draw the composition in loosely, then I ﬁll in the big shapes,” he says. “I start with what is exciting for me — sometimes it is the center of interest, sometimes not. I block in with thinned paint and pretty accurate color. With the block—in I can tell what the painting is going to look like. I start with my darkest dark, or at least key off that. Sometimes my outdoor stuff doesn’t have a lot of contrast for that reason. I put the sky in relatively late.”

Elliott has painted some of the most sun-bleached parts of the United States, but he doesn’t often manipulate the key of the scene for a painting. “I like both high—key and low-key paintings, and sometimes that is my idea, to do a high—key painting," he says. “But I don’t typically manipulate the shadows to make the shadows lighter. I just go high—key overall.”

For his color palette, Elliott goes for maximum saturation. “I have several intense colors, such as phthalo blue, viridian, Indian yellow, and magenta,” he says. “My thought is to have the high—tinting paint on there so I can go gray if I want, but have the option of intensity. I consider my paintings colorful. Basically, I go with 11 colors plus white. I don’t operate under any color theory. I will use a color that I see someone else using — I’ll just try it.” 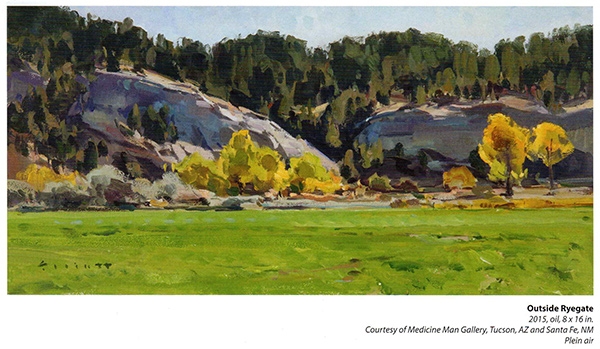 On location, he’s not necessarily looking for compositions to enlarge in studio paintings. “On paint trips, the pieces are not reﬁned very much,” says Elliott. “I’m just getting down as much information as possible. That is why I stopped trying to have them ﬁnished on site. I will reﬁne some of them when I get home and sell them. Some will serve as inspiration for studio paintings, others are just exercises.”

Elliott is running with the big dogs, exhibiting alongside some of the best plein air painters working today. He is aware of this. He is also aware that he needs collectors to buy his work. But his toughest audience is himself. “I do consider where the paintings are going, especially studio paintings for a certain deadline or show,” he says. “I try to avoid just doing what I think collectors will like. It would be tempting to do that over and over again, paint what sells. But most of my frustration in painting is from me as the audience, trying to outdo and impress myself. I paint new ideas for me. I work to paint new ideas so that painting remains challenging and exciting.”

This artist is clearly thinking of the big picture. He considers himself a work in progress. He knows that he is growing. Elliott is already a successful artist with plenty of accolades, but the Josh Elliott of 2020 will see his current art with a different eye.

“On location it’s fast and sketchy, but in the studio, I don’t know what fast would be,” Elliott says. “Sometimes I think that if I would spend a little more time with them, they would be better, but if I forced myself to spend more time on it, I might end up overworking them. I set paintings around the studio and look at them. I know they will look different two days from now. I know that two years from now I may see problems with something, but when I look back at something I painted two years ago, it informs me, in much the same way that art books inform me. It helps me grow.”

BOB BAHR has been writing and editing articles about art instruction for more than 12 years. He lives with his wife and two young sons at the northern tip of Manhattan.