Josh Elliott turns his attention toward Arizona and the Southwest desert for his new series of paintings. 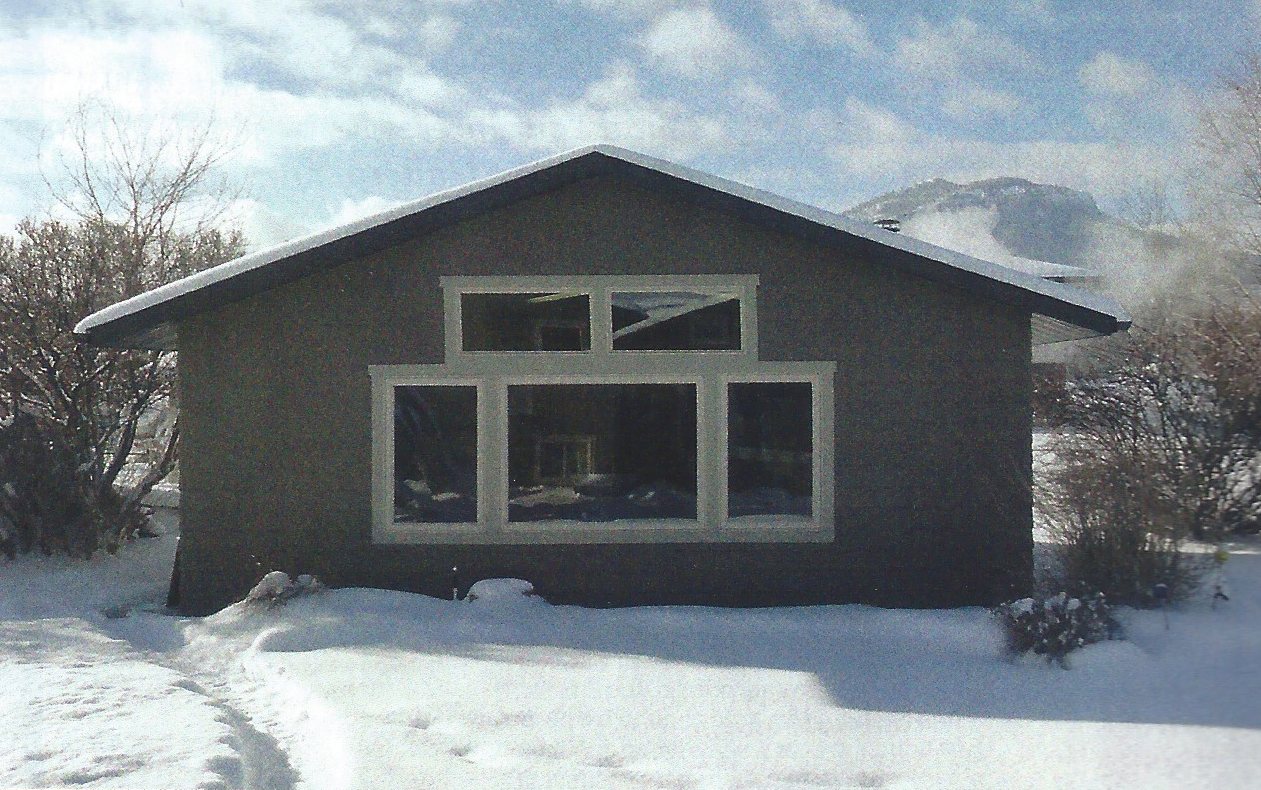 Visitors to Arizona’s Desert Caballeros Western Museum and the Mark Sublette Medicine Man Gallery this winter and spring will get to see paintings of the Arizona landscape that show off accurate details from scenes right outside the venues. Landscape painter Josh Elliott - known for his authentic portrayals of places such as Oregon, the Taos area of New Mexico and his home state of Montana - based his newest collection on the towering saguaros, red-colored rocks and dirt-covered roads of Arizona's most beautiful places, from Tucson to the Grand Canyon. He drew inspiration from trips he took to the state with painter friends, painting sketches and taking photographs outside to draw inspiration from.

"A lot of places I visit because of their tremendous beauty,” Elliott, based in Helena, Montana, says. "There's not another place like the Southwest in the world, with the strange forms of the cliffs and eroded sandstone and the big sky and the saguaro cactuses that always blow my mind when I see them. I'm not used to painting an orange shadow in Montana. It's really unique, and there's a lot of history and mystique about the area, with the indigenous people adding to the story of Arizona." 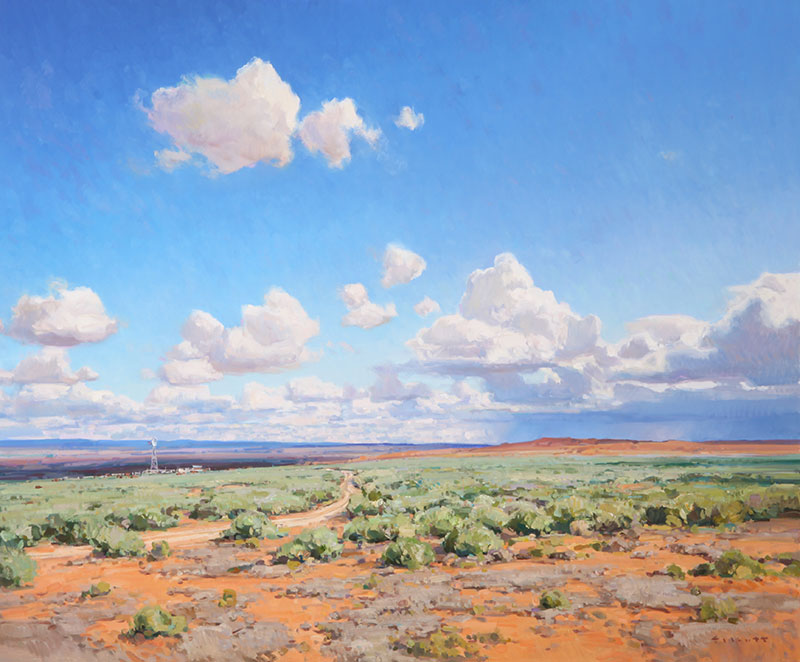 Elliott first visited Arizona in 2007, and he's since toured all over the state, including Monument Valley, the Vermillion Cliffs, Lake Powell, and Scottsdale. He strives to add a human element to the nature he depicts, such as Navajo hogans in the desert, or a distant house in front of a mountain backdrop. The way Elliott modernizes timeless nature scenes is a quality that impresses Mark Sublette, owner of Medicine Man Gallery, which has shown Elliott’s work for Nearly 10 years.

"He has an ability to depict an image that has a sense of time and place, things that have the footprint of humanity," Sublette says. "Josh sees the imagery out there and, in his own mind, it is translated to a very unique set of images on canvas. You can paint a rock, but it's more than just painting it. It's the composition and layout and then the skillset of having the viewer see what you're trying to show them, which makes Josh a rising star."

Some may consider him a rising star, but Elliott has been recognized as one of the top Western landscape painters for more than 10 years, since he won the Ralph "Tuffy" Berg Award at the C.M. Russell Art Auction in 2003. He's gone on to garner more than a dozen significant honors for his work, and he has dedicated collectors, such as David B. H. Seacat, who has nearly 10 of Elliott's paintings. Seacat says he's impressed with Elliott's ability to "bend light and illuminate the rich and vibrant colors of a jagged desert canyon, to capture the movement of rushing water long since gone from the desert floor, to mimic the subtle tracks left in powdery drifts of snow by a passing rabbit or a wayward deer, and to recreate a mirror-like reflection in a calm tide pool."

"It is my belief Josh Elliott is one of these 'special' artists who have the capability to achieve greatness, thereby leaving a body of work for posterity which is both noteworthy and highly collectible," Seacat says. "Truly, he is an American master in the making." 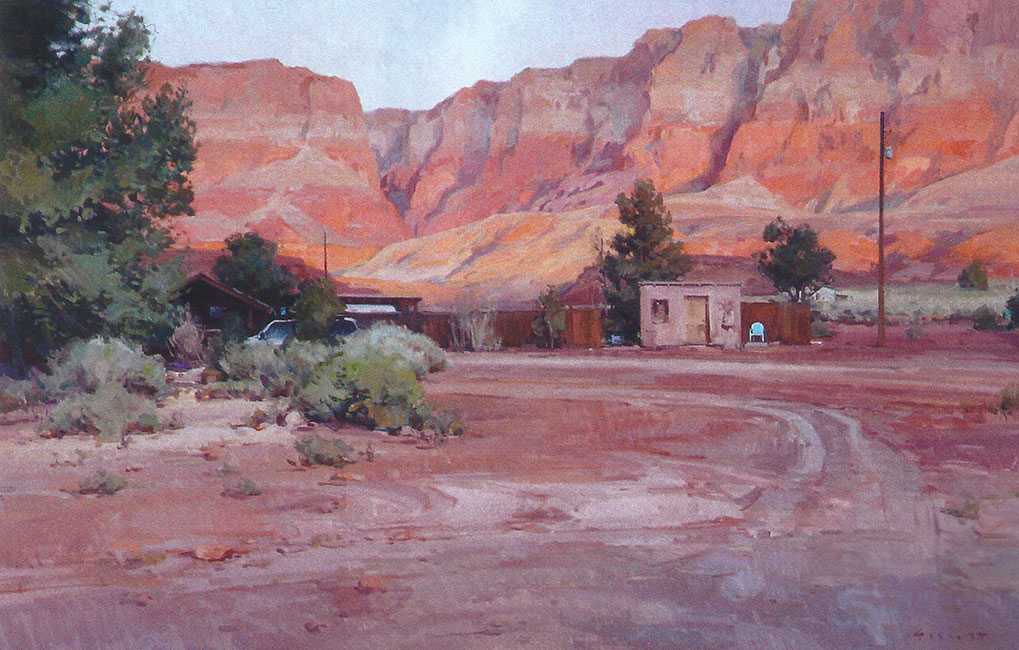 For the acclaim he receives, Elliott is extremely humble and respectful of the places he paints. He compares his works, such as the Grand Canyon-focused Seen and Unseen, to love songs - there are a myriad of versions, but he hopes to put his distinct personal stamp on capturing the places he visits.

"Some of the very best artists around have painted the Grand Canyon, and I didn't know if I could say anything new about it, but I'm really going for painting ideas, even though they're all locations," Elliott says. "The main idea was the big blue shadow going through it, and the transition of going darker and lighter to warmer, while maintaining the mass of rock and cliff."

In The Blue Chair, Elliott paints the Vermillion Cliffs in northern Arizona, with all their orange and red hues in the desert morning light, while making the small house in the distance not an afterthought, but a standout, by brightening up the blue chair sitting in front of it. The painting came from a trip with artist friends, where they stayed at a fishing lodge and sketched all day.

In Desert Winds, Elliott took an ordinary, middle-of-nowhere landscape in northern Arizona made up of wide open spaces and a cloud-dotted sky, and made it his own by focusing on a unique composition.

"I like the bright color combinations in that," Elliott says. "I think any good designer, whether it's a fashion designer or someone who makes rugs and weavings, thinks about what colors go together." The painting is filled with vibrant green plants, orange dirt ground and brilliant blue sky. Viewers will have to look closely to see the cattle and windmill in the background, the human touch that's Elliott's trademark.

Another way Elliott gives his work an original touch is through the dimensions of his canvases. Free to Roam is a 22-by-66-inch panoramic view of Monument Valley, captured during a painting trip with friends in which they spent two days sketching at the location.

"I paint in a traditional manner and go for accurate colors and values and try to look realistic, but the innovating part is the format of that painting," Elliott says. "It's a pretty bold design. I liked painting the big cliff wall, because when you're there, you get the feeling of just being surrounded by these massive cliffs." They're not quite human, but the sheep in the painting remind viewers of the life surrounding landscape.

Elliott has more than 15 paintings in this collection and says he tried to make them as diverse as possible, in terms of color schemes, formats and overall ideas. Viewers will see landscapes ranging from those with big skies, to those with large foregrounds, to long, narrow scenes filled with bright colors.

While many are painted from photographs, Elliott enjoys painting in front of his subjects and learned how to do so in Alaska when he was 17 from his father, wildlife artist Steve Elliott. He says he enjoys the companionship painting trips offer, especially since they give him a chance to talk with his peers, compared to spending time alone in the studio.

"I think they're nice because, in a way, they're collaborations, because you're deciding on locations together," Elliott says. "Scenes that would interest my friends might not have caught my eye right away, but you stop and look and appreciate and figure out what you can do with them. Painting is also a pretty solitary profession, so when you get together with friends, you can talk about things other people would think are weird, like values and color. That camaraderie is necessary."

Connecting with his peers is especially important to Elliott because he acknowledges the level of talent he’s surrounded by in the Westerns art market world. Elliott says the more he shows around the country; the more he’s incentivized to turn his work “up a notch - or four.”

His dedication to the craft is paying off, as his show at Desert Caballeros Western Museum (DCWM) marks his first solo museum show. He first formed a relationship with DCWM through former director James Burns, now director at University of Arizona Museum of Art. Burns had followed Elliott's work for several years before including it in a 2007 exhibition he curated at the Booth Western Art Museum, and Burns later purchased Elliott's Montana-oriented Rurality for DCWM from The West Select 2012 exhibition. Burns says he continues to be impressed with Elliott's ability to "exude the essence of the rural West" through his paintings. 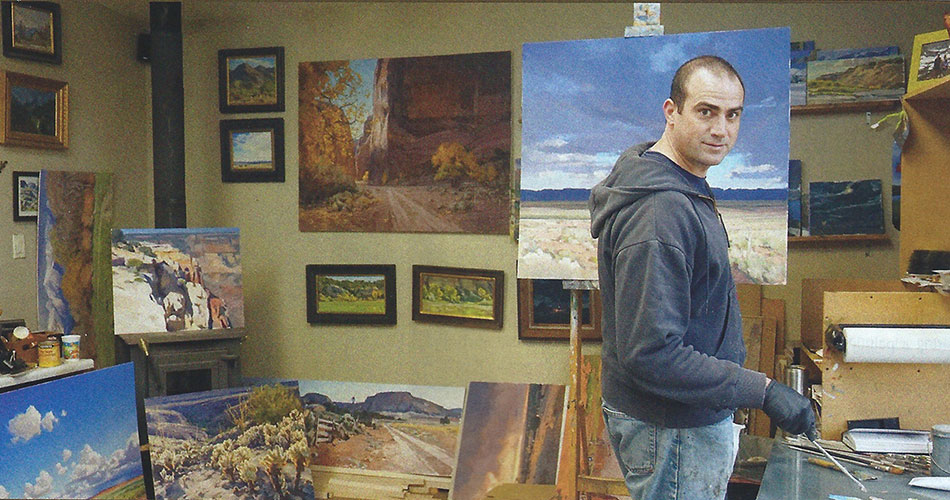 Josh Elliott in his studio

"It has been a thrill to watch Josh discover his love of northern Arizona's landscapes over the past few years," Burns says. "As a curator and a museum director, I have always told artists, 'Show me something different.' That's what I like about Josh's work. His style, subject matter and perspective are identifiable. From across a crowded room, I know when I'm looking at a Josh Elliott painting."

Sharon Ricci, public relations manager at DCWM, agrees Elliott is effective at capturing "the allure of Arizona's openness, that bountiful breathless quality and glorious ruggedness which draws people to engage nature here. A voice for the Western environment, Josh's paintings capture nuances of light, the intimacy of its vastness and layered dimension of treasured wilderness with a unique contemporary vision." 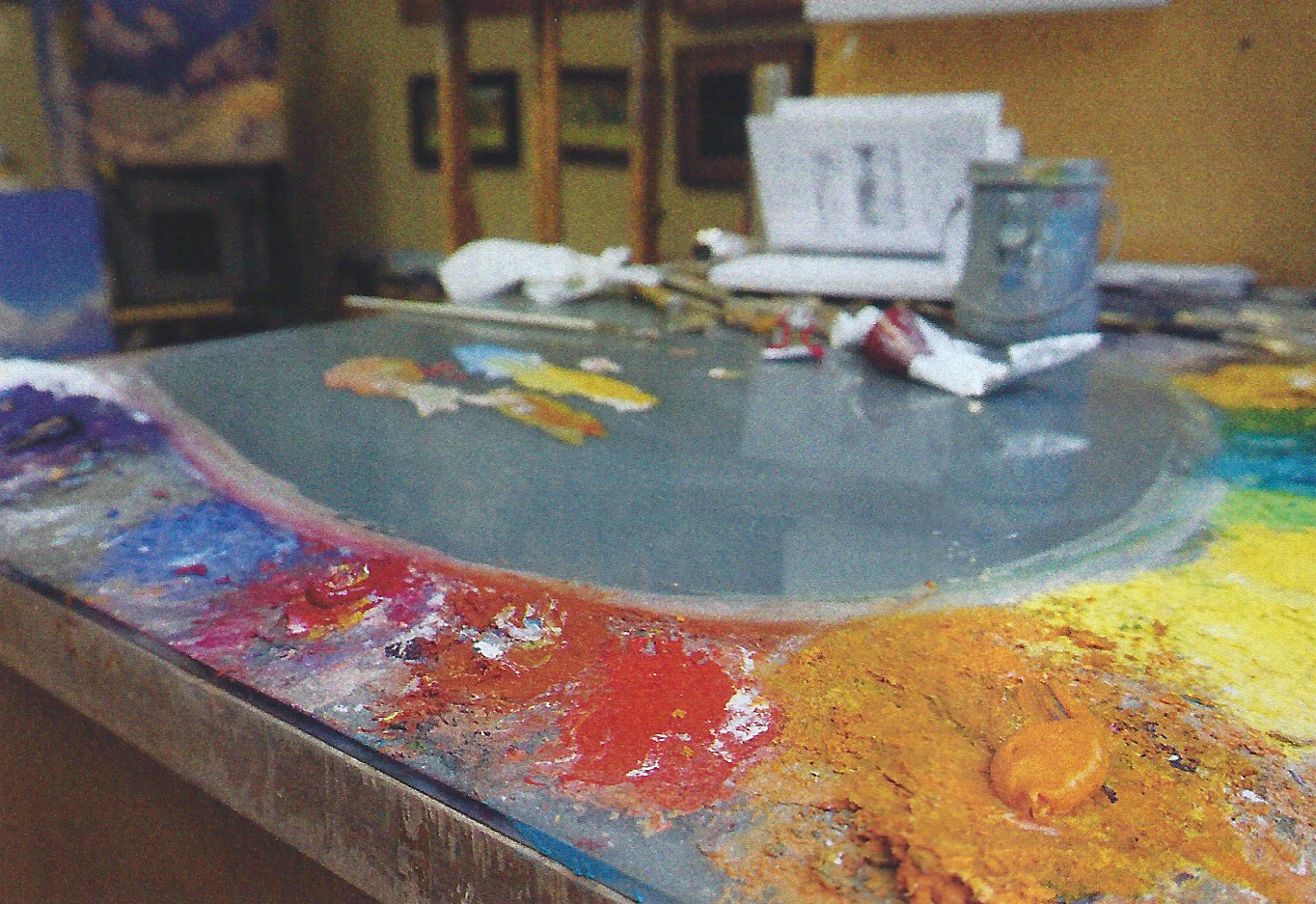