Mountains to Desert: A Versatile Artist

Reprinted courtesy of ArtBook of the New West, Spring/Summer 2007

To capture the true environment around us, not glorified, not painted for others but for oneself, is an enlightened path for an artist. Josh Elliott paints the landscape the way he sees it. Desolate and cold or sunny with soft, purple shadows under sparse desert growth, Elliott teaches the viewer beauty is everywhere. Whether a modest home in Coolidge, Arizona or a remote farm in Radersburg, Montana, Elliott captures the symphony of color, light, and shadow that transforms the ordinary into a place of beauty. 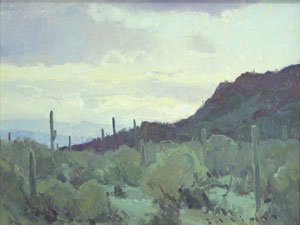 Born in Great Falls, Montana in 1973, Josh was introduced to painting early in life by his father, wildlife painter Steve Elliott. After studying at several universities including Colorado State University, University of Idaho and Montana State University, he went on to learn from his father, his greatest influence. His father taught him the significance of painting from life and Josh soon discovered his passion for painting outdoors. For Josh, nothing is more satisfying than experiencing natures ever changing moods. 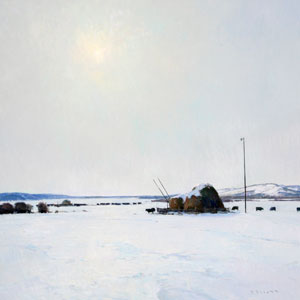 We can experience this passion in Big Sky, February. The scene is expansive and calm. One can almost smell the cold crisp air. Centrally a tiny respite from the cold sits amidst the barren landscape, a safe haven for its inhabitants and livestock. A lone light pole firmly cuts the landscape as a reminder to the viewer of man’s ever encroaching presence on the land, a theme echoed by other great western artists such as Maynard Dixon. 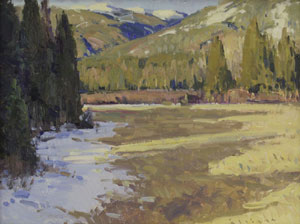 Josh has participated in numerous shows and has won many awards. At the 2005 Tucson Plein Air, Josh was awarded the prestigious Maynard Dixon Award and the Quick Draw Award. In 2003, the C. M. Russell Art Auction awarded him the Ralph Tuffy Berg Award for Emerging Artist. He recently won Best Small Painting Award at the Acadia Invitational in Bar Harbor, Maine 2006, and the Legacy Award and Award of Merit at the 2006 Northwest Rendezvous of Art. He was recently invited to be a member of the Northwest Rendezvous Group. 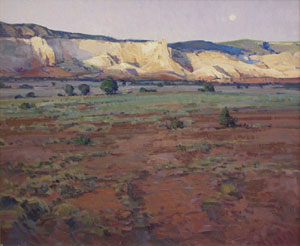 Josh has had a feature article in Art of the West (July/August 2006) and was also featured in American Artist in February 2007. He works out of his home studio in Helena, Montana. Josh Elliott is proudly represented by Dr. Mark Sublette Medicine Man Gallery Tucson and Santa Fe. 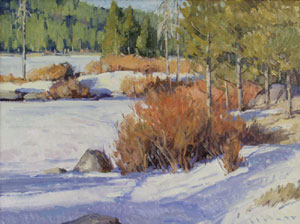