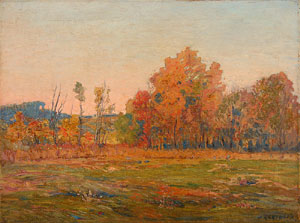 Joseph Kleitsch was considered one of the premier painters in the early California School of Impressionism. Born in Deutsch St. Michael, Banat, Hungary on June 6, 1882, he began painting at the age of seven. After being awarded a scholarship by his village to study art, he continued his training in Budapest, Munich and Paris. Around 1901, he immigrated to Germany and then to Cincinnati, Ohio. In 1905 he moved to Denver. Between 1907 and 1909 he visited and painted in Chicago, Kansas and Mexico City. He was honored in 1912 for his portraits of Mexico's President Francisco Madero and his family.

Around 1914 Kleitsch moved to Chicago where besides painting portraits of many prominent citizens, he taught at the Art Institute of Chicago from 1914 to 1919. While there he joined the Palette and Chisel Club and participated in exhibitions where his new style of painting interior scenes with figures was shown. In 1914 he was awarded the Gold Medal by the Art Institute of Chicago.

In 1920 Joseph and his wife, Edna, moved to Laguna Beach and started the Kleitsch Academy. Although he was at the height of his art career in Chicago, he found the rustic local street scenes in his new home to be extremely inspiring and his painting flourished. He was soon exhibiting his work at Stendahl and Hatfield Galleries in Los Angeles while also making trips to San Francisco, Carmel and Europe in search of the next painting subject. Arthur Millier of the Los Angeles Times was quoted saying of Kleitsch, "He was a born colorist; he seemed to play on canvas with the abandon of a gypsy violinist."

Kleitsch became an avid plein air painter and helped to cofound the Painters' and Sculptors' Club in 1923. It was a men's only group patterned after the Salmagundi Club of New York. They worked with studio models and also had a sketching camp for landscape painting. He was awarded their Silver Medal.

From 1926 to 1929 Joseph returned to Europe, painting in Giverny to experience first hand the inspiration for Monet's works and then traveling on to Hungary and to Spain before returning to Laguna Beach where he had a successful showing at the Stendahl. A few years later Kleitsch died suddenly at the age of 49 from a heart attack.

During his life he was also a member of the Chicago Society of Artists and the Laguna Beach Art Association, which awarded him the Grand Prize and Figure Prize.