Part 5: The Indians of the Northern Plains compelled by Joseph Henry Sharp to move to Crow Agency, Montana in 1905, but by 1908 Sharp was ready to settle in Taos and it was there Taos Society of Artists was founded. 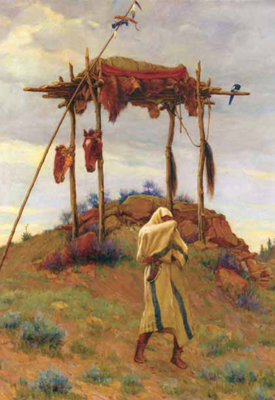 In 1905, Sharp began building a log cabin at Crow Agency on government land near the confluence of the Big Horn and Little Big Horn rivers, three miles from the Custer Battlefield. Sharp was strongly drawn to the Indian way of viewing life. As his identification with it deepened, his compassion for all that the Indian had suffered increased, and his obsession with the Indians’ vanishing ways and values became at times almost an obsession with death itself. Of all the paintings of platform burials that Sharp produced while at Crow Agency, the most famous, and perhaps most important, was The Voice of the Great Spirit. Although Sharp did not consider the painting one of his finest, he did call it “the one that made me famous”. Today the painting is part of the Smithsonian collection. 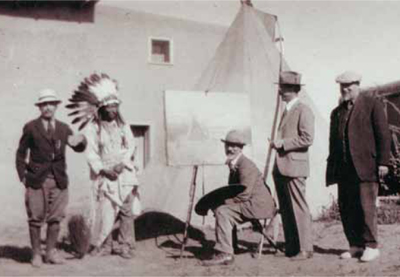 Sharp set up his old Crow teepee outside the Taos studo. Little Egypt is on the right. Note that
the painting is of a Montana teepee scene. Left to right are Bert Phillips, Soaring Eagle, Sharp,
Ernest Blumenschein and E.I. Couse. PHOTO COURTESY BUFFALO BILL HISTORICAL CENTER, CODY, WY

Crow Agency was visited by a number of noted Western artists and illustrators during those years. Warren Rollings, Guzton Borglum, Bill Gollings, Ernest Thompson Seton and certainly the most illustrious artist to visit was Frederic Remington. A celebrity whom Sharp frequently saw was the legendary Buffalo Bill, for it was during these years that the famous scout and buffalo hunter returned to the West to take up residency.

But as time passed, Sharp began to consider settling permanently in Taos, for although the colorful history and stirring vitality of the Indians of the Northern Plains was a strong lure, many of the old warriors were now gone and the traditions of the past were rapidly vanishing. From the beginning Sharp had known that his time at Crow Agency was limited, and, as the years passed, the models and paint became less available and in the spring of 1908, he made plans for a permanent move to Taos. 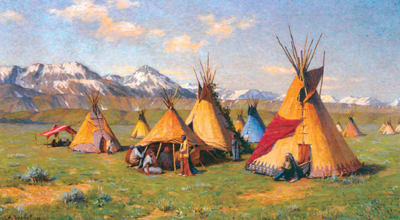 Europe was embroiled in war, but not in Taos, the war was far away, a matter of newspaper reports and involved discussions. The artists were preoccupied not with thundering cannons and bloody conflict, but with the activities of the recently established Taos Society of Artists. Founded in 1912, the Society had its first formal meeting in 1915 at the home of Dr. T.P. Martin (now the Taos Inn). Six artists gathered to form the group: Joseph Henry Sharp, Bert Phillips, Ernest Blumenschein, Oscar Berninghaus, Herbert Dunton, and Irving Couse.  Walter Ufer and Victor Higgins would be members in 1916; E. Martin Hennings would join in 1921, Catherine Critcher in 1924, and Kenneth Adams in 1926.

The bylaws of the Society stated that the purpose of the organization was “to develop a high standard of art among its members and to aid in the diffusion of taste for art in general.” On the practical side, the artists wanted to organize traveling art shows. The elected president had the burdensome task of planning and organizing each exhibit, arranging the crating and transportation of the paintings from gallery to gallery,and making sure the unsold work was returned. Thus was a complex logistical effort, but was accomplished efficiently and with few problems while Couse, the first president, was in office. 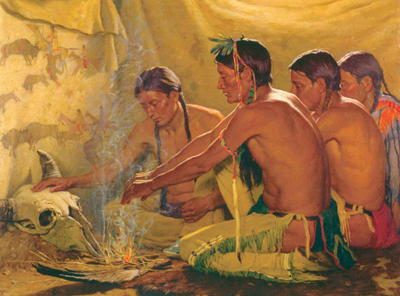 As the fame of the Society spread, tourists and collectors came to Taos in greater numbers. Art lovers must have been intrigued by Sharp, whose home and studio were filled with paintings, artifacts, and antiques. Sharp lived and worked in surroundings overflowing with history. His Taos home had originally been an old dance hall, and he had
erected a custom-built privy that he called “Little Egypt”. The Penitente chapel was converted to a storeroom when his new studio was finished in 1915. Located just southwest of his home, the new studio was a two story structure with a narrow, unguarded staircase that climbed the west wall to a mezzanine, which was enclosed by a log railing. Beside a kiva fireplace in the south wall, he fashioned a special window; the window was round, but on the inside it had a square frame, enabling him to show it on his canvases as either round or square to get the composition or feeling he desired. The model’s platform could be easily moved toward the window or the fireplace, depending on whether sunlight or firelight was appropriate.

There were hundreds of paintings to be seen, and those that could not be hung because of lack of space were stacked along the walls. Rusty guns, Indian baskets,  headdresses, tomahawks, and other artifacts cluttered the studio, and finely woven Indian rugs and blankets hung from the balcony. 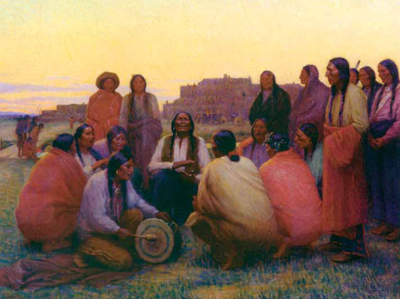 Two attractions were of special interest. One was the deerskin on which White Swan had painted the story of his exploits in battle. The second was a large buffalo skin teepee, a relic Sharp had acquired from the Crow Indians. He delighted in the astonishment of children when they saw the teepee that was, however, much more than a tourist attraction. Sharp set up the large teepee inside his studio. While Indian models posed inside by a blazing fire, Sharp painted the scene from outside by looking through a small hole that he had cut in the side of the teepee. Because these scenes were frequently painted on hot days, the normally peaceful Indians sometimes became irritable and occasionally downright angry, and could be pacified only by the promise of more pay. Such was the price Sharp paid for authenticity. 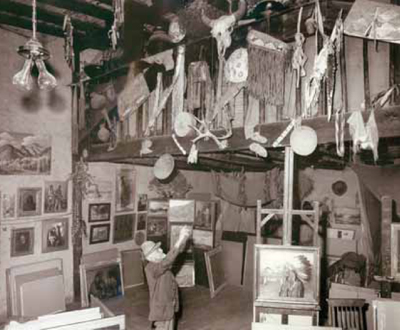 Many of the Indians loved Sharp dearly, almost always preferring to pose for him than the other artist, and they were greatly amused by one of his habits. When working on a painting, Sharp would dab some paint on the canvas, then dance or hop backwards six or eightfeet to view the result. The Indians who often gathered in the studio thoug t this
was very funny and would laugh and mimic him behind his back. Their actions
weren’t disrespectful, though; they were instead a sign of acceptance and regard for the artist.

Although he still loved to travel, Sharp now found pleasure in the routine of daily life, relishing in the comforts of home, fairly predictable weather, and the companionship of good friends. His routine began early in the morning when he arose, and lacking the luxury of modern plumbing and electricity, took a sponge bath. Then he ate a light breakfast and went to the studio. After some moderate exercise, he painted until about 1:00 p.m., and then took a break for lunch and a short nap. On days when he had errands to run, he went off at a brisk pace, hurrying down the narrow roads to complete the dozen or so tasks on his list. Always dressed on a felt hat, suit and vest, and heavy
shoes, he stopped here and there to greet friends. As he read their remarks, he sometimes threw his head back and laughed heartily. Then with a few warm nods and a twinkle in his eye, he was on his way, usually in a hurry to finish his business and return to his studio to catch the day’s remaining light.