Part 3: This installment of Forrest Fenn's updated book on the life and works of Joseph Henry Sharp describes how he painted the masterpiece that changed his life 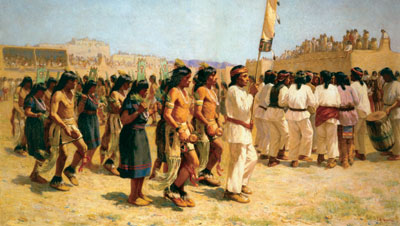 One afternoon in 1876, Joseph Henry Sharp read the screaming headlines: CUSTER’S SEVENTH CAVALRY MASSACRED BY SAVAGES. The lurid prose of the article that followed described how Custer, a flamboyant Union officer during the Civil War who afterwards had gone West to fight the Indians, had led his column of 212 cavalryman into battle against overwhelmingly superior Indian forces led by great chiefs: Crazy Horse, Gall, and Two Moons. The battle had taken place on June 25th among the rolling hills of Montana near the confluence of the Big Horn and Little Big Horn Rivers. According to the newspapers, Custer and his men had fought off charge after charge by the “savages”, but had finally perished to the last man. Custer, for the moment, was a hero to most. Later, controversy, criticism, investigations and congregational hearings would raise questions about the judgment and conduct of Custer and his fellow officers. For Sharp, the incident was a source of personal conflict because the Ohio-born general had been one of his childhood heroes. He believed that Custer and his men had behaved gallantly; however; his long fascination for Indians made him sympathetic to their cause, and he could not help but admire their stalwart defense of their lands.

Twenty-five years later, these same warriors sat as friends before his canvas only a few miles from where they had fought against the famed general whom they called “Long Hair.”

After continuing his education and travels abroad with his friend John Hauser, Sharp returned to Cincinnati in the fall of 1889 to find the city astir with creative activity. The art community had now begun to break loose from its provincial bonds, and some of the members were beginning to attain national recognition. The Cincinnati Museum Art School had become the Cincinnati Art Academy—a name change that reflected the community’s awareness of what was happening in Europe and its desire to be part of the developing art scene in America. At Cincinnati Art Club event, Sharp met Addie Byram, a young music student who he would later marry.

When not painting commissioned portraits, Sharp was busy painting street scenes and landscapes. By 1890, his reputation had begun to extend beyond Cincinnati. Several of his paintings and sketches in exhibits in Boston and New York had received favorable reviews, and Detroit firms were making prints of his work. A striking watercolor titled Entrance to Havana Harbor received a an enthusiastic review in the national magazine Art Amateur, causing a Cincinnati critic to observe that Sharp’s name was “better known among art connoisseurs in the East than right here where his work is done.” The same critic lamented that the“greater number of his watercolor paintings are sold in New York” to private collectors rather than finding a “resting place” as they properly should “in private galleries” of Cincinnati. 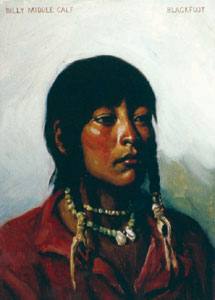 J. H. Sharp, Blackfoot, oil, 14 x 10", Courtesy of the Phoebe Apperson Hearst Museum of Anthropology and the Regents of the University of California 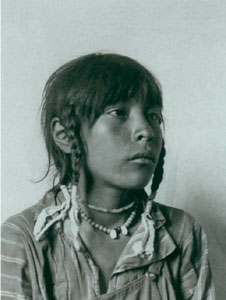 Sharp’s next opportunity to paint Indians from life occurredwhen Buffalo Bill’s Wild West Show came to Cincinnati, and Sharp make a number of sketches and oil studies of Indians dressed in full regalia. Although he found no market for his new subject, Addie encouraged him to follow his instincts, and so he began planning another trip west.

In 1893, Sharp’s Going to the Races, which he had painted during his honeymoon in Massachusetts, was chosen for exhibition at Chicago’s World Fair. The honor was the first of many Sharp would receive, but the only one for a painting with a non-Indian theme. With Addie’s encouragement, Sharp had at last made an important decision: from now on, Indians would be his primary subject. At the end of the school year, he put his affairs in order, closed his studio, and with Addie, boarded a train for the New Mexico territory.

At the end of the long journey, they arrived in the sprawling adobe town of Santa Fe, where they met Sharp’s former traveling companion, John Hauser. The two men rented a buckboard and, leaving Addie in Santa Fe, set out for the northern pueblos. 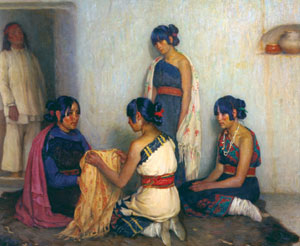 They spent a week making sketches as they waited for the annual feast of San Geronimo. Life here was simple and crude. They slept in a one-room adobe with a dirt floor. Sharp and Hauser now began the sketches and studies for which they had journeyed so far. However, they had considerable difficulty persuading even a few of the Indians to pose. To coax the Indians into posing, the artists offered candy, colored cloth, and small amounts of money; before long, their room was crowded with those eager to trade their services.

The summer had been fruitful beyond his expectations. Now, it was time to return home. Happily laden with head and color studies, he and Addie returned to Cincinnati, their huge leather trunk full of war bonnets, dance masks, peace pipes and a constellation of other treasures he had collected on the trip. Among the paintings he now finished were Harvest Dance of the Pueblo Indians of New Mexico and The Turquoise Dealer. They were an instant success, and illustrations of the two were published in October of that year in Harper’s Weekly with accompanying descriptions written by Sharp himself. The brief articles were among his proudest achievements, and he was to talk about them for the rest of his life. Sharp settled down to work in preparation for two upcoming shows. On April 21, 1894, the Traxel and Maas Gallery in Cincinnati held a one-man show that included 13 pastels, 41 watercolors, and 42 oil paintings. The gallery was to have a long and pleasant association with Sharp, whose paintings could always be found there. Although the show revealed the variety of work he had done over the last several years, it focused on the 25 paintings of Indian subjects which had resulted from his recent Western trip. Prices in the exhibition catalogue reveal that the artist valued his Indian paintings five to six times more than comparable non-Indian subjects. Most of the paintings were priced from $5 to $100; the most expensive, at $1,000, was The Harvest Dance, a large oil version of Harvest Dance of the Pueblo Indians of New Mexico, which was now famous because of the Harper’s Weekly article that had appeared six months earlier. At the Art Club’s Fourth Annual Exhibition at the Cincinnati Art Museum, The Harvest Dance, that was now considered his masterpiece hung in the place of honor, dominating the entire wall. Elated with the response to the show, the museum trustees decided to buy “the most outstanding painting” and chose Sharp’s Harvest Dance after the artist agreed to sell it at half price.

The response to his paintings at the two shows reassured Sharp that he could attain success by painting Indian subjects. His experience at the pueblos during the summer of 1883 had taught him that Indian models would not “sit for long,” and therefore he was limited to making quick drawings and waiting until he returned to his studio to paint portraits based upon the sketches.