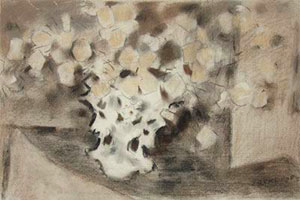 Ward Lockwood was born in Atchison, Kansas in 1894. Studying at Pennsylvania Academy and in Paris, Lockwood developed a talent for several forms of modernist painting. Moving to Taos in 1926, Lockwood, along with his friends Kenneth Adams, John Marin and Andrew Dasburg, began to take the painting of the region in a more modernist direction. Lockwood himself painted in Cubist, Expressionist, Surrealist and Constructivist style while in Taos, and his pieces often have little in common with each other. Te majority of his pieces are watercolors. 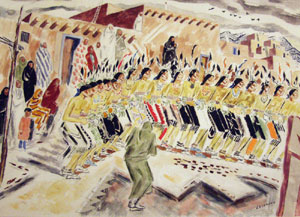 Though Lockwood's career is primarily defined by the work he did while in Taos, he painted and taught for a variety of corporations and universities. He did work for the WPA and the Federal Arts Project before accepting teaching positions at, in chronological order, Broadmoor Academy in Colorado Springs, the University of Texas at Austin and the University of California- Berkeley. He also exhibited with the abstract-expressionist painters of the San Francisco Art Association. In 1963 he moved back to Taos and died the following year.