On February 26, 2013, The Briscoe Western Art Museum welcomed the arrival of its first installation, a 13-foot-tall bronze sculpture by award-winning Cowboy Artist John Coleman titled Visions of Change. The 2,000-pound bronze was a gift to the museum from the Jack and Valerie Guenther Foundation. 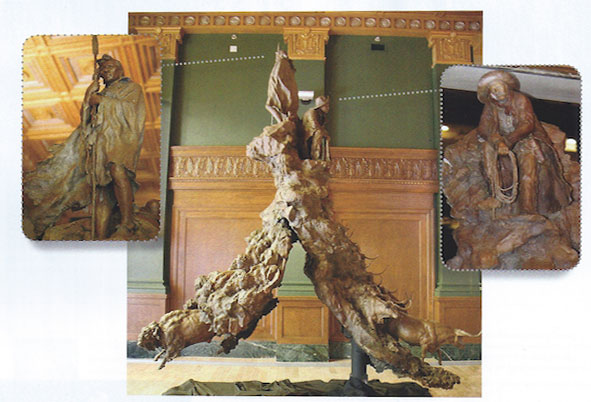 "The arrival of the Coleman sculpture is a wonderful way to kick off what is to become the long-standing home of Western art in San Antonio," says Dr. Steven M. Karr, executive director of the Briscoe Western Art Museum. "More than art on the walls, the Briscoe hopes to bring life to the wonderful works and historic objects through thoughtful programming and engaging content for all of our visitors."

The one-of-a-kind monumental bronze statue, which depicts an American Indian with buffalo on one side and a cowboy and cattle drive on the other, will welcome visitors to the San Antonio, Texas-based museum when it opens to the public this fall. “Visions of Change represents the two main archetypes of the American West," explains Coleman. "During the relatively short period of the great cattle drives north the conflict between these two cultures gave birth to the romantic idea we have today of the cowboys and Indians. There is no greater location to showcase this piece than The Briscoe Museum located at the heart of where this all began."