John Coleman isn’t nearly as interested in the technical aspects of sculpting as he is in telling a story that makes collectors sit up and take notice. 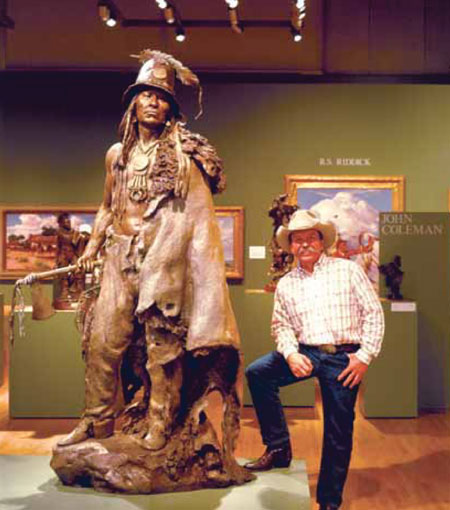 John Coleman is a sculptor on a mission. He wants someone looking at his work to have the same emotion he had when he first heard the story that inspired the sculpture.

Coleman explains, “The philosophical part of what I do is always consistent. I already know how to create a sculpture. The next step is the abstract idea. I try to inject some sort of mood and emotion in my work. It goes back to putting a physical face on a spiritual idea. That’s the difference between real art and a decorative object. We respond to things, like sculpture there are curves and straight lines. Curves are feminine and straight lines are masculine. That’s the abstract design behind the work. I would hope that people will feel the emotion that I’m feeling when I’m creating this stuff. I’m using these as tools as a way to create that dialogue.”

Coleman has given a lot of thought about how to make his sculptures relatable. “The overriding compliment I get from collectors is that they can feel the life in my work. The idea that the work has life in it means that it’s not a replica of life. When a sculptor is creating the human form, he has to re-invent it, not just copy it. It’s not what you put in, it’s what you leave out. It’s about eloquence, saying the most important thing you have to say in the simplest way, and saying it in a way that people can relate to it. There’s an empathy thing that happens. The odyssey in art is pulling these things from someplace.”

For Coleman, that someplace comes from deep inside.“Some people meditate or pray everyday. You’re trying to get back to where you come from, which is infinite. But then there’s always the risk that you’re going to hit a sour note. You’re making an attempt to be eloquent and you take a risk and it falls apart. You’re never quite sure. That’s what allows you to take the risk to create something that’s truly profound instead of rehashing your successes over and over again.”

Coleman continues, “The first time somebody mentioned that I had a style that was the best compliment I ever got. When you have a recognizable style it’s because it’s coming from inside. It’s because you’re creating something original. We all have our place that we’ve been. Without too much analysis, our work comes from that place. That’s one of the things I hope people feel when they come to the show. That they’re going to see something new and fresh, and that it comes from me and is in my style.”

So where does Coleman find his inspiration? “When I first started really getting serious about sculpting, my interest was in mythology, it always has been. The Native culture has such a strong influence in this country that I started seeing that as something sustainable.”

Coleman has created six brand new works that will debut at the Cowboy Artists of America Show at the end of October. Coleman says, “The CAA Show is the most unique show in the country. I hold six months of my work for the CAA Show. I can’t show it to anybody. It’s a great thing to be able to bring it all into the room like that. It’s exciting.” 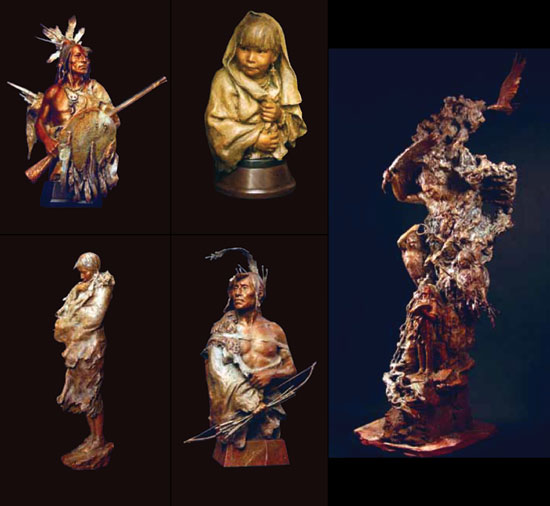 Top Left: The Guardian, bronze, 28" x 22" x 12". Top Middle: Little Pueblo Girl, bronze 17" x 10" x 7.5". Right: Calling the Fathers, bronze, 8'6" x 34" x 46". Lower Left: Winds of Change, bronze, 25" x 7" x 7". Lower Middle: Mandan Warrior, bronze, 19" x 12" x 7". The artist says, “With the help of a ceremonial fire and its smoke to carry his prayers, a Sioux man on a vision quest plays his drum and prays for guidance from his emerging ancestors. I have framed this piece with two symbols: the mortal and the spirit. The buffalo skull at his feet represents his life on earth: his body came from the earth and there it will return. The eagle represents his spirit and all that is infinite.”

Coleman is particularly excited about a monumental piece that was just coming back from the foundry at press time.“The monumental piece is called Calling the Fathers. It’s a man chanting, playing a drum and at his feet is a ceremonial fire. Below the fire, because he’s standing on a terrace, is a buffalo skull. In this particular case the buffalo skull represents the earth and where everything comes from. As the smoke starts to waft over his head, his ancestors start to emerge from the smoke. At the very top of the piece is an eagle. The buffalo skull represents the mortality, everything that comes from the earth goes back to the earth, and the eagle represents infinity, or immortality. Again, that kind of typifies what interests me in the Native American culture. The metaphor, the idea of giving a physical face to a spiritual idea, is what has always appealed to me. As a sculptor, I’ve used the smoke a lot because the smoke is a way of carrying the prayers to the Great Spirit.”

For another one of his new sculptures, Coleman found his inspiration in the granddaughter of one of his sculptor friends. “Every year it’s been a tradition for me to do a sculpture of a little girl. I don’t like to repeat myself. I’m adamant about not using the same face more than once unless it happens to be the same character. Oreland Joe’s granddaughter was the inspiration for this one. I did her portrait, and put it in a context. That’s the design element. I did a Pueblo girl. She has a shawl over her head, so there are no feathers involved. The child was so beautiful I didn’t want anything distracting from that, so I kept it fairly simple.”

Many of Coleman’s sculptures build on ideas he’s worked with previously. Such is the case with one of his most recent creations. “I’ve done a companion piece to a piece I introduced last year. The Greeter was based on my interpretation of what Black Moccasin might have looked like when he met Lewis & Clark. He was over 100 years old when he was painted, so I backed it up so that he was around seventy, and everything that he was wearing is based on what a Hidatsa Chief might have been wearing at the turn of the century. For the new piece, I ran across a painting of Black Moccasin’s son. I created a man who would be just about the right age to be Black Moccasin’s son. He’s got a gun, a shield, and a quiver with bow and arrows. He’s created in the same way as The Greeter. He’s a bust called The Guardian.”

Coleman sums up his aspirations this way. “You try to distinguish yourself whether you’re creating something with more substance, or something just to decorate. You hope that that makes it a little nobler of a cause. This is a business, but it’s a calling as well. We’re all trying to get to a certain spot where you earn the respect of the collectors and your peers. It’s really up to them to determine whether or not you achieve what you set out to do. If I had a goal, I’d like to think that I could earn the respect of someone like Howard Terpning by the time I’m his age.”