As president of the Cowboy Artists of America, John Coleman gives Western Art Collector a sneak peek into his studio before this year's big show. 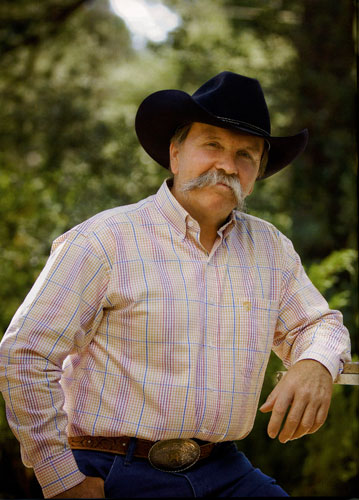 John Coleman's roomy Prescott studio, tucked nicely under the hilly, tree-laden land that overlooks the town, is a quiet space where the artist doesn't just create his art but also tries to relate what's going on in his mind and in the studio to the larger world outside. 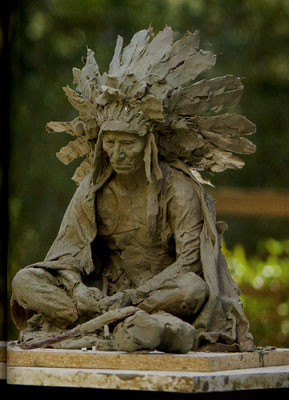 John Coleman, Glory's Past, once of his newest works for this year's CAA show.

What he finds, typically, is that the stories he illustrates with his historic bronzes are stories that relate to all humanity, that transcend the time and place in which they occur and have the ability to teach us all something about the similarities that actually exist between peoples and cultures. 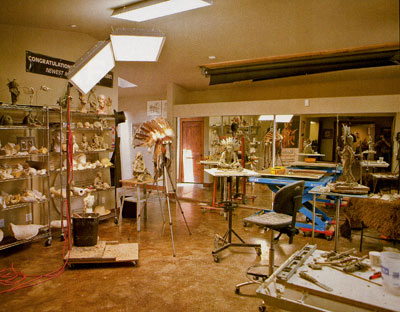 Before starting one of his bronzes, Coleman does something unique to his style and his art - he picks up books, usually history books, and reads until something sparks his imagination.

"I've always gravitated towards history," says Coleman. "I've always loved it. Mythology, for me, was very important, like a religion to me. For my entire career as an artist, I've been interested in trying to figure out why people think the way they do. I'm also drawn to our own times and similarities in cultures I see around me. It's fascinating to me that we are so much alike and that we seem to arrive at the same conclusions." 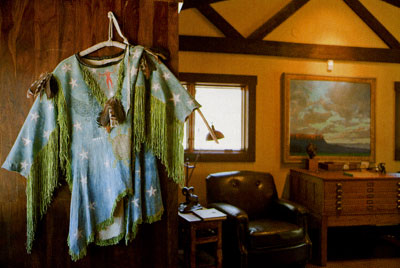 Coleman's studio is his sanctuary, a quiet space where he doesn't just create his art but also tries to relate what's going on in his mind with the outside world.

It is through reading and learning this shared and individual history that Coleman is able to find the narratives and context for his art pieces.

"Pulling out a history book and reading, it's like finding gold sometimes," says Coleman. "I remember reading about the Apache puberty rite and our culture doesn't celebrate this moment, it seems to be a little scary, but for the Apache it is a great celebration. And so I'll read these stories, where at sunrise they do a dance and then the young girls kneel in front of the sun, and it involves abalone shell, which links to their creation story, and there is bee pollen involved as well. Viewers look at my work and get a sense of what is going on at the time of the ceremony, and then it is able to transcend the moment and becomes more. And then different cultures are able to relate to it as well."

This shows how Coleman is able to take something and, through research and study, be able to offer it up to other cultures and show how this is an event that we can all relate to.

"I have an appreciation of my own culture and I approach theirs as an outsider and am able to marvel at what we have in common," says Coleman. "And, that is the key to this whole thing. And, this way, it is not just about the object but about the stories and being able to relate to them and getting the viewers to relate to them as well. After all these years, it also allows me to keep from getting tired and always get interested in the work I'm creating." 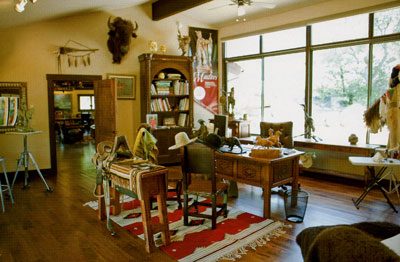 Coleman's office within his studio, which is filled with Western memorabilia and artwork.

Coleman always knew he wanted to be an artist but took an interesting path to get there. He started his art career as a teenager, illustrating a column for a famous hairstylist in the 1960s in Hollywood. The hairdresser, George Masters, wrote a column about the different stars he came in contact with and Coleman was hired, at age 16, to do a pencil drawing of each star.

Coleman then did various illustration jobs before deciding to go into the commercial contracting business to support his young family. However, he always knew he would someday return to being an artist. As soon as his two daughters were of the age to take care of themselves, he went back into the studio and started working on his art. 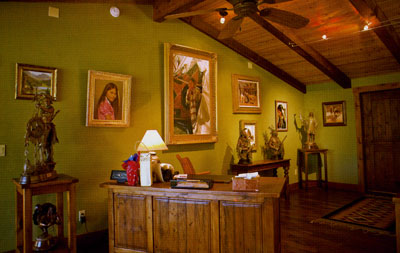 Coleman's studio is filled with his own artwork and that of his peers, including a painting by the late Ray Swanson (center) flanked by a portrait by Don Crowley.

"My wife and I were married as teenagers and we started our family very young," says Coleman. "I needed to make a living and I didn't want to just dabble in art. For me, art was too sacred to just dabble in it. So, I put it on hold, went out, made a living, and when my girls got to that age, I pulled the switch and started my art career again. That was in 1993."

Coleman renewed his career by enrolling in three weeks of instruction at the Scottsdale Artists' School. Because of this early influence on his career, he has been a fan of the school ever since and is even creating a special event to take place later this year. In the spring, Coleman, as president of the Cowboy Artists of America, has arranged for several of the group's members to teach classes to emerging artists at the school. The Cowboy Artists will mentor new students as well as give instruction in their particular field of art. 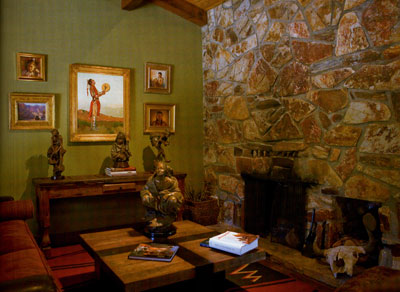 A painting by fellow CAA member John Moyers (center) highlights one of the rooms in Coleman's spacious studio.

"I was able to choose to study with artists who I really admired," says Coleman. "And I was able to hang out with them for a week and learn techniques but also learn just about the experience of being an artist. There is nothing like hanging out with someone you admire and getting advice on every level, including just how to handle yourself as a professional artist."

Two of the artists whom Coleman studied with during this time were Lincoln Fox and Richard MacDonald. "Lincoln is just one of those teachers who everyone admires and loves," says Coleman. "He has a great philosophy on things and gave me my first workshop." 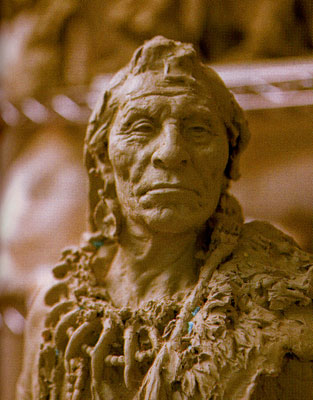 Another submission for the 2009 CAA show is the new piece Coleman is currently working on titled The Greeter.

Coleman also credits his wife, Sue, as being a continual source of inspiration for him.

"You have to have people around you who will tell it like it is and not be afraid to say, 'this is crap,'" says Coleman.

"My wife is that for me. She has such a fresh point of view and is really the secret to my success. You need someone who will be honest with you and someone who really cares about the work on the same level as you do. I wouldn't be nearly as successful without her. We've been married over 40 years, met in junior high, and have two children and now six grandchildren we share."