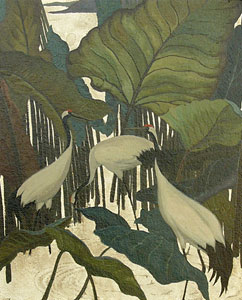 Jesse Arms Botke was born in Chicago in 1883. Her artistic studies began at the Art Institute of Chicago and continued afterward under J.C. Johansen and Charles Woodbury. In 1911 Jesse Arms Botke became employed by Albert Herter and assisted him with the mural he painted for the St Francis Hotel in San Francisco. It was here that Jesse Arms Botke formally connected with the subject matter that would dominate her work, as she was asked to execute all of the birds in the mural. 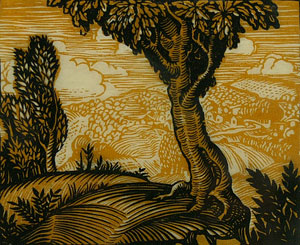 While visiting Chicago in 1914, Jesse met a Dutch-born artist named Cornelis Botke whom she married in 1915. After twelve years of semi-nomadic existence, the Botkes finally settled in Wheeler Canyon in southern California, outside of Santa Paula. This would be her home until her death in 1971. It was here that her characteristic work was developed: bold, decorative paintings of exotic birds. 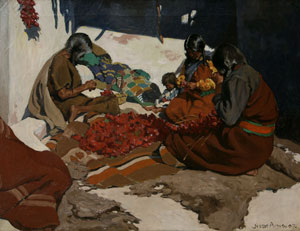 Jesse Arms Botke was a member of many organizations and won many awards both in Southern California and her native Chicago, where she continued to exhibit work. Jesse Arms Botke's work can be seen in the collections of the Art Institute of Chicago, the Pennsylvania Academy of Fine Art, the Municipal Gallery, Chicago, Mills College, Oakland and the San Diego Museum. Murals painted by Jesse Arms Botke and her husband can also be seen at the headquarters of the I. Magnin Co. of Los Angeles, Woodrow Wilson High School in Oxnard, California, Noyes Hall at the University of Chicago and the Kellogg Factory in Battle Creek, MI. 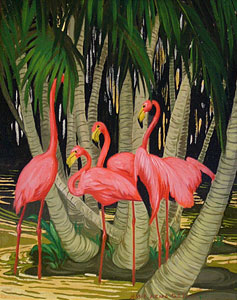