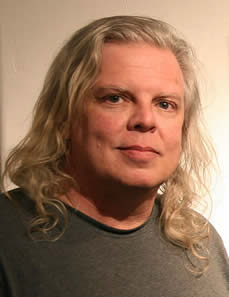 Jeff Aeling was born in 1958 in Iowa City, Iowa and currently resides in St. Louis, Missouri.  His father was an Army physician during the 1950s and 1960s so the family moved from one hot spot to another when the Cold War dominated the American consciousness.  His connection to nature came when the family was posted in Hawaii.

In addition to painting absorbing landscapes images at his home studio in Kansas City, Missouri, Aeling recently concluded a monumental exhibition that took over two years to design and create.  “The Layman’s Guide to the Passage of the Millennium” included over a hundred exquisite three-dimensional assemblages and paintings addressing the anxieties of contemporary culture.  Aeling’s painting travels take him all over the southwest.  He finds himself returning to particular areas that allow clear observations of the weather, atmosphere and the unobstructed lay of the land.

Out on location, Aeling absorbs the geography and the rich earth colors, terra verde, ochre and reds that permeate the landscape.  Jeff Aeling’s universal landscapes possess a stunning intimacy that conveys unexpected power and emotion.  His paintings draw upon a vastness that gives you a sense of wonder and awe about the universe.

Once in the studio, Aeling paints with economy.  He keeps his brush strokes gestural, often painting at arm’s length, as he applies pigments to board he uses the smallest number of brush strokes.

Jeff Aeling’s paintings have been shown in exhibitions and purchased for collections across the United States.