Illustrating and Painting the West

Illustrating and Painting the West

Long before Wild West shows and heroes in white Stetsons, the American West was a blank canvas. It entered the world’s visual imagination when artists were sent to the frontier to record what they saw and returned with images that inspired a fascination that continues today. Not only did these artists record the reality of Western life, they also created American icons. Missouri’s George Catlin (1796-1872) and Germany’s Karl Bodmer (1809-1893) won acclaim for their depictions of buffalo hunts and elaborately attired Indian chiefs, but the golden age of Western art did not begin in earnest until the 1880s, when Frederic Remington (1861-1909) began exhibiting and publishing nostalgic images of a Wild West already starting to disappear. Born and raised in upstate New York, Remington became a bona fide cowboy who, at one point, wanted his tombstone to read, “He knew the horse.” His commitment to authenticity encompassed the often brutal side of Western life, and he refused to sugarcoat the abuse of Native Americans. 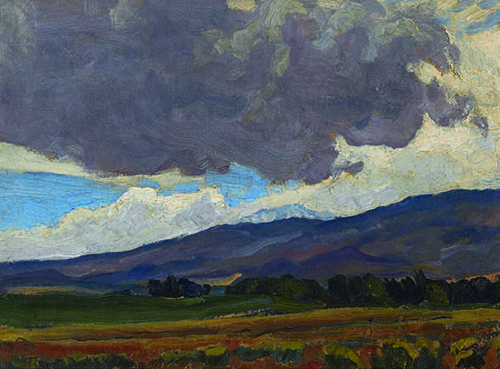 HEADING EAST TO DISCOVER THE WEST

If Remington was his era’s MVP of illustration, then Howard Pyle (1853-1911) was its Super Bowl champion, thanks primarily to his school in Wilmington, Delaware, where he trained many of the illustrators who turned their attention westward. (For more on Pyle, please see the February 2012 issue of Fine Art Connoisseur.) His roster of students reads like Who Was Who in American Art, including N.C. Wyeth, Harvey Dunn, Frank Schoonover, and Maynard Dixon.

Pyle conveyed six crucial lessons that helped them succeed as both illustrators and artists:

2. Convey universal themes such as greed, grief, pride, and mercy by helping the viewer become an eyewitness to a vivid experience.

4. Use design,and seek the simplest way to convey your message.

In 1891, a 16-year-old San Franciscan sent his sketchbook to Remington. The older man replied: “You draw better at your age than I did at the same age... If you have the ‘sand`to overcome difficulties you could be an artist in time. No one’s opinion of what you can do is of any consequence. Time and your character will develop that.” The youngster was Maynard Dixon(1875-1946), who headed east to study with Pyle briefly before exploring New Mexico and Arizona, often on assignment for the era’s top magazines. Dixon died at his winter home in Tucson, painting giant saguaro cacti and the Catalina mountains right until the end. 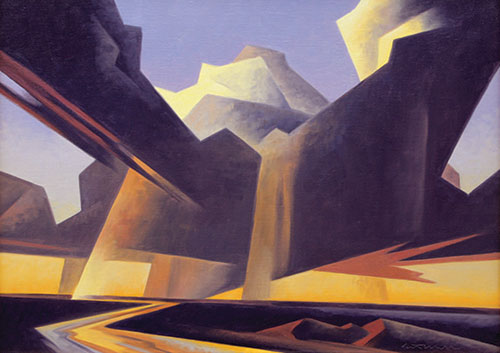 Pyle told another student, N.C. Wyeth (1882-1945), to “go live with the Indians.” Wyeth was just 22 when Scribner’s sent him to a reservation in New Mexico. The Navajos there did not like being photographed, so Wyeth made reference sketches and ultimately conveyed a more dignified and sympathetic view of them to readers who had been led to believe they were always hostile. Wyeth won international acclaim not only for illustrating Western scenes, but also for such adventures as Robinson Crusoe and Treasure Island, and is still named as a key influence by almost every Western artist working today. Alas, he never realized his dream of becoming a fine artist, a hope fulfilled only later through the work of his son Andrew and grandson Jamie.

In 1904, Frank Schoonover (1877-1972) found himself in New Mexico on assignment. His friend Clarence Mulford had written a story about a cowboy and asked him to find a guy with a limp to illustrate it. One day Schoonover saw a man sitting on a fence, one leg looking considerably shorter than the other. He promptly sketched the man, and even bought his boots as a souvenir, but to this day no one has discovered the name of the model who became the character Hopalong Cassidy. This mythic figure was also illustrated by Maynard Dixon, then in a comic book by Vic Donahue,and ultimately became the center of a hugely popular television series. In short order, Hopalong became a beloved symbol of integrity, epitomizing “the way of the West” for generations. Schoonover himself won fame for his images of the West, and today collectors seek out “Schoonover Red,” which he inserted wherever possible by applying a dash of cadmium red, varnished heavily to heighten its intensity. Schoonover must truly have loved all those cowboys sporting red bandanas.

Word of the West’s visual feast traveled fast. Artists Ernest L. Blumenschein and Bert G. Phillips hired a wagon and set off for an extensive sketching trip in the “wilds” of New Mexico. On September 4,1898, however, they were stopped cold by a broken wheel. Phillips walked to the nearest town, which happened to be Taos, future home of the Taos Society of Artists he established there with Blumenschein, Oscar Berninghaus, Irving Couse, Herbert Dunton, and Joseph Henry Sharp. Their mission was to promote their work through exhibitions that would travel nationwide. Sales from this venture were poor, but they succeeded in creating a unique school of art based on the people, land, and culture of New Mexico that is avidly collected today.

So why did so many artists go west? Some, like Wyeth and Schoonover, were commissioned to accumulate reference materials for specific publishing projects. Other artists, like Maynard Dixon and Tom Lovell, felt that the West was their calling and chose to spend their lives discovering, painting, and sharing their vision o f the land and people. Then there were artists like Frank McCarthy (1924-2002), who moved west to retire from illustration and just did what artists do: began painting the richness of the subject at hand, both present-day and historical.

In the male-dominated field of illustration, however, there was only one woman who gained recognition as a Western artist, Bettina Steinke (1913-1999). Having created more than 500 portraits of NBC executives and entertainers in New York City, Steinke moved to Oklahoma in her early 20s with her photographer husband. There she discovered the beautiful surroundings and features of the Crow nation and spent the rest of her life painting their portraits.

From the 1950s through 1970s, a second generation relied upon Pyle`s teachings to achieve enormous success as commercial illustrators, yet they did not attract notice in the art world until photography stormed the publishing industry and forced them out. Having illustrated Western movie posters and paperback covers, McCarthy was the first to make the move west. He settled in Sedona, Arizona, where he met a gallery owner and sold out his first show of Western subjects, set in both the past and present. McCarthy relayed the good news to his artist friends back East, and the migration began. Perhaps through the prestige of its late resident Maynard Dixon, Tucson became home to the Tucson Seven, top illustrators who found a different kind of success when they began painting the West: Harley Brown, Duane Bryers, Don Crowley, Tom Hill, Robert Kuhn, KenRiley, and Howard Terpning. (Please see page 101 for details on Terpning’s current museum retrospective in Los Angeles.) 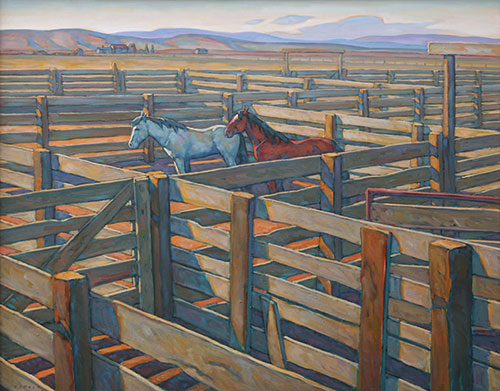 Many artists were inspired to move West by memories of the illustrations they relished in boyhood. Having won fame in 1970s New York for his airbrush style, Ed Mell (b. 1942) returned to his native Scottsdale, found a friend with a helicopter, and proceeded to paint the Southwestern landscape from an innovative aerial point of view that captures the wide openness he loves. Originally from Chandler, Arizona, Howard Post (b. 1948) taught graphic arts at the University of Arizona in Tucson before he returned home to paint the vanishing ranchlands of his youth. Like Remington, Russell, and Wyeth before him. Post knew the cowboy life firsthand and was even a rodeo star for a time. His paintings offer a unique perspective and nostalgic view of the West, with a nod to Wayne Thiebaud`s colorful “halos” and Dixon’s graphic style. Once an illustrator, Dennis Ziemienski (b. 1947) has successfully applied his poster-like style to paintings that celebrate his memories of the Western landscapes his family once admired during their road trips. In an ironic twist on the westward migrations described above, some of the most popular artists working in the West today hail from East Asia. For example, Z.S. Liang and Mian Situ were both born in China in 1953, and are now very successful painters of historical life west of the Mississippi. 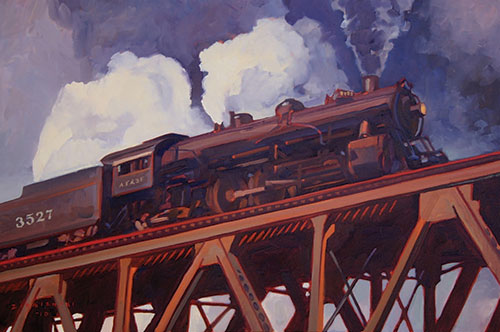 So what is the future of art of the West? Art historian Don Hedgpeth maintains that Western art “will continue to have great appeal for the buying public. It holds and describes all the yearning for the open, independent life that modern man longs for in his subconscious ... The West reflects all types of work and people ... [and] does not have to be only cows and horses; it is many things including the most important, which is its philosophy of living, the greatness of the country we live in.” All of these artists have contributed to the legacy that informs contemporary Western painting. As art historian and author Don Hagerty explains, “The frontier has all but disappeared, while the West itself seems timeless.” Collecting Western art is like preserving a unique piece ofAmerica's heart and history. Perhaps that's why the“Great American West” continues to be so appealing, whatever your age and wherever in the world you happen to live. The nostalgia of freer times and the romance of the life on the frontier have endured and will surely continue for generations to come.

There are useful indicators to support this. On March 31, the Scottsdale Art Auction brought record prices for both contemporary and historical Western artists, most spectacularly two Howard Terpning paintings that soared past their estimates to achieve $1,934,000 and $1,710,000. More broadly, there’s the continuing popularity of Western movies — almost a dozen appeared in 2010 and 2011 — and also the popular television series Justified, a modern-day crime drama. In one scene, the “thug” comments on the Stetson worn by the hero, a U.S. marshal: “Not much call for cowboys these days.” “You would be surprised,” the lawman replies." Not much call for Western art these days? Indeed, you would be surprised.

JANE BARTON paints landscapes and still lifes en plein air and also in her Tucson studio. She trained at the American Academy o f Art in her native Chicago, as well as at Boston University and Syracuse University, then pursited a 25-year career as a nationally recognized graphic designer, illustrator,and portraitist before turning to fine art.