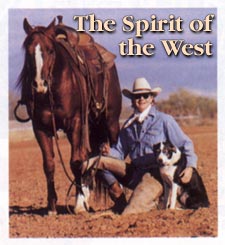 Night begins to fall over Sugar City, CO, a small town on the prairie about 130 miles southeast of Denver. As shadows stretch across the ground, Jan Mapes rides on horseback through the sagebrush. Having checked on the cattle she and her husband Jim winter on their ranch, she’s heading back to the stable.

Suddenly a jackrabbit darts across her path. The horse doesn’t shy away, thought — in fact, he all but quivers in anticipation. Jan and Jim have prepared him well as part of their cutting — horse operation, in which they train steeds to separate individual cattle from the herd out on the range. 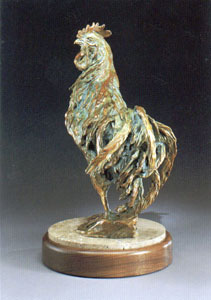 Mapes digs in her heels and tweaks the reins, turning in pursuit of the jackrabbit. Working as teammates finely attuned to each other, she and her mount chase the rabbit back and forth through the sagebrush as it wheels and darts, its ears back, its head extended, its big hind feed coiled to spring. At last, the rabbit disappears in the undergrowth.

Mapes reins in her horse and pauses. As the last traces of daylight fade, she replays the scene in her mind, noting the angle and shape of the rabbit’s ears, the stretch of it’s head and feet, and the ripple of it’s lean, strong muscles beneath velvet fur. Then, ingressions fully absorbed, she turns her horse toward home with a touch of her heels and a flick of the rein. 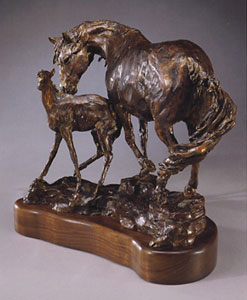 "It is not in my hands but heart what I want to paint," the great western artist Charles M. Russell once wrote to a friend. Mapes — a western artist to the core — follows in Russell’s tradition, both in her subject matter and in the depth of heart she puts into her sculpture. That passion, coupled with natural talent, has been growing in her since early childhood. "It didn’t really start out as a love of the West, though — just a love of the outdoors and nature," Mapes says.

Her dad, an Air Force colonel, kept the family traveling to various postings in the United States and Germany. Through all the changes, one touchstone remained constant for young Jan: her grandparents’ little ranch in Hope, AR, where the family spent a few weeks every summer. "The small-town rural life appealed to me," Mapes remembers. "My main concern was the horses. One time, when we were about to go home, I was so much in love with a paint pony named Diamond that I took my mother’s lipstick from her purse and drew hearts all over him. Inside the hearts I wrote ‘Jan + Diamond’ and ‘I love you.’" 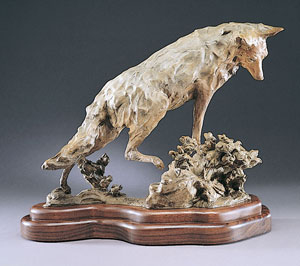 In 1969, when Mapes was in ninth grade, her dad retired from the service. After she spent six blissful months with her grandparents in Hope to finish out the school year, the family moved to Castle Rock, CO, in the eastern foothills of the Rampart Range just south of Denver. Instantly, she recalls, "the West and the mountains appealed to me. I thought to myself, ‘Yes, cowboys!’ and ‘Yes, horses!’"

One thing she didn’t say "Yes!" to, however, was art. Although she had sketched incessantly since early childhood, art didn’t seem like a reasonable career. "Somewhere along the line, I'd decided that art was supposed to be your hobby," says Mapes, "that you didn’t do it for a living." After graduating from high school in 1972, she earned a two-year degree in equine training and management followed by a bachelor’s degree in earth science from the University of Northern Colorado. 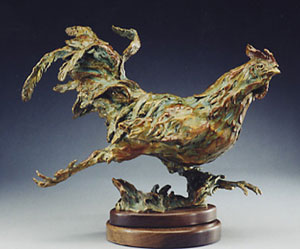 Her reason for taking that course of study was simple. "I asked myself, ‘What job can I do to get the summers off and spend time outdoors with horses?’" She became a science teacher at Castle Rock Junior High.

Meanwhile, her passion for horses and the outdoors led her to both her true companion and her true calling. In 1978, while helping out neighboring ranchers with their spring branding and fall roundups, she met Jim Mapes, a young Texas-born rancher and her ideal man. "He loved horses, he loved ranching, and he loved taking care of the land," she says. Two years later, they married.

The union changed Mapes’ attitude toward art almost instantly. On their honeymoon in Santa Fe, NM, she remembers, she and Jim toured galleries filled with sculpture. "The work overwhelmed me with its sensuality. I just had to try it myself." 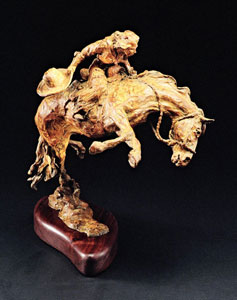 Back home in Colorado, she bought some clay. When a four-day blizzard a few months later made her feel stir-crazy trapped in the house, she started sculpting. "I did a piece that showed two horse heads and their necks." Mapes recalls, ‘with their ears back and their mouths open, squabbling with each other. Maybe I did it because I was annoyed by the snowstorm. So I called it TICKED OFF." At the urging of friends, she cast the sculpture in bronze. An edition of 10 sold out.

With her husband’s encouragement, Mapes quit teaching to devote herself to ranching and art. "Jim told me life is about being happy and that he knew I could make it work," she says. After 10 years of managing the Greenland Ranch, the couple moved to Sugar City in 1990 to set up their own cattle and cutting-horse operation.

All the while, Mapes slowly but surely built her reputation as a sculptor. Each year since 1995, one of her works has captured a top award from the La Junta, CO, Fine Arts League. And in 1997, she won two awards at the prestigious Knickerbocker Artists’ 45th Grand International Open Juried Exhibition. 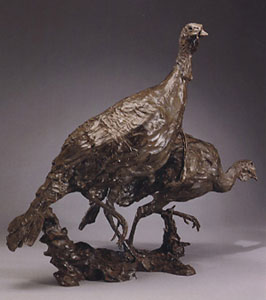 But there’s only so much art a person can do while leading a ranching life. That’s why Mapes — with her husband’s full support — built a separate studio for herself at the ranch in the summer of 1997. "I decided to make art a full — time commitment," she says. "Jim hired on other people and, thought I’m welcome to do any of the ranch work I want to, I’m not required."

Nowadays, she devotes five good hours a day, five days a week, to studio work. "The rest of the time," she says, "I’m out there working the cattle or training the horses." In short, she’s still gathering tremendous inspiration for her art right from the source. 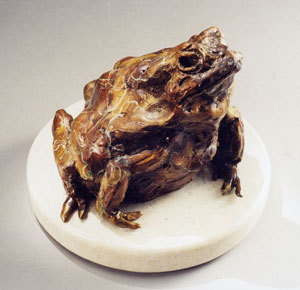 The increase in her production of sculptures, from one a year to 12, has been dramatic. So, too, has the improvement in her work. More and more, Mapes relies on subtle technique to convey her vision. "I like to use a lot of texture to create pathways through and around the piece, with soft edges where I want your eye to move on and harder edges to stop you," she says. "When you’re not bound up in detail, you’re free to express the emotional side of the piece, to create the mood."

Look at some of her latest works and you can see the emotional connection she emphasizes. In High Tailin' It, a life-size version of the earlier Lickety-Split, you can feel the jackrabbit’s sheer joy in running. Scratch 'n Sniff shows two old longhorns, one languorously scratching his back while the other takes the measure of the air. "They’re survivors," Mapes explains of the pair’s quite dignity. "They show the spirit of the West." 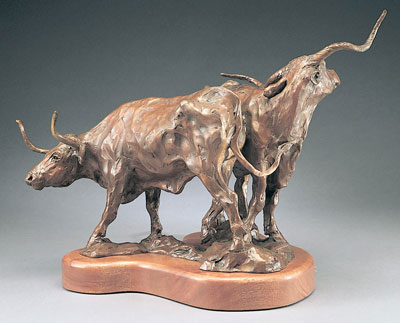 Most recently, her portrayal of the western spirit has ventured into human territory — yet another sign of her growing maturity as an artist. In Way Out West, Mapes portrays a rip-roarin’ cowgirl in a Wild West show. "She’s a petite little gal, but she’s got a big spirit," says the artist.

Even closer to her heart is Body and Soul, a work commissioned for and about to be unveiled at the new wing of the Arkansas Valley Regional Medical Center in La Junta. "They wanted to commemorate the Mennonites for their involvement in health care in our area since way back in the early 1900’s," says Mapes. Following the form of a rising spiral, the sculpture shows a nurse sitting on a stool, playing with a child held by its mother in one arm; in her other hand the mother holds a Bible, and a doctor stands behind her, helping turn the pages. "Hospitals heal bodies," Mapes explains of the sculpture’s message, "but the Mennonites healed the soul as well."

Good art, too, has the power to touch the soul, and Mapes hopes hers can do just that. "My goal," she says, musing at the end of another day of art and ranching, "is to capture the spirit and beauty of this earthly experience, and to encourage others to see, feel, enjoy and appreciate it."