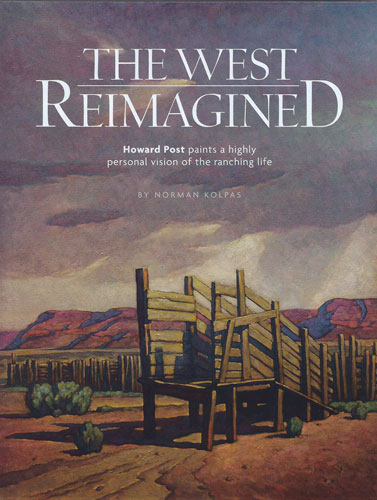 Horses huddle together on the arid Arizona range, their coats vibrant in an assortment of oranges, violets, and browns. On a remote ranch in Utah, an old wooden loading chute seems bowed beneath the weight of storm clouds looming so powerfully overhead that they threaten to engulf the viewer. In a pen made of weathered boards, a trio of native cattle blend into shadows. These three paintings, Strawberry Roan, Distant Storm, and The Three Natives, all undeniably capture the spirit of the American West. Yet none of them hew to the subject matter, composition, or colors that have traditionally defined western art. There are no images of cowboys atop bucking broncs or bulls, no vast expanses of idealized landscape that seem to lack only a posse chase or an Indian buffalo hunt to bring them to full Cinemascope life.

Howard Post portrays the West from a different, quieter perspective, capturing the more intimate view of the region that a lifelong rancher and cowboy experiences day in and day out. His oils on canvas offer close-up, sometimes steeply angled views of animals and humans, usually in repose, executed in a painterly style and with a vibrant palette that, while not always strictly realistic, somehow deliver a more powerful emotional impact and sense of truth than tightly rendered reality ever could. Post himself, however, quickly sidesteps such highfaluting claims. “If other people make statements or find underlying meanings in my work,” he says, “that’s okay with me. But that’s not my intent.” Take the groupings of cattle or horses he often features in his compositions, which seem poignantly to convey a sense of the solace all living creatures can find in togetherness. The artist, however, explains that his own interest derives simply from “the shadows and patterns and how they relate together. I’ve always loved and responded to that, which you don’t get with just one animal.”

It's tempting, and possibly valid, to chalk up such disclaimers to the natural modesty that comes from the kind of hardworking ranching life to which Post was born back in 1948, the youngest of Gertrude and Kevin “Bum” Post’s four children. He was raised on his parents’ 30-acre ranch outside of Tucson, AZ, where they kept small herds of horses and cattle they supplied to rodeo competitions. “I grew up wanting to be a cowboy like my dad,” he says. So, naturally, he gravitated to rodeo from the get-go. He first competed in junior events as a 12-year-old and went on to win the Arizona High School All-Around Championship in his senior year.

But another sturdy thread also ran through his life: a love of art. “I drew pictures like most kids,” he says. “Most of them were of cowboys.” In third grade, he made a pencil drawing of his dad hunting deer, and his teacher submitted it to a contest run by the Tucson Daily Citizen. It won first prize and ran prominently in the paper along with a photo of young Howard. “The drawing wasn’t any better than any other kid’s,” Post demurs. “But once it got reinforced, I made the decision that art was my calling in life.”

His mom quietly supported that decision. She bought him books on western life by acclaimed cowboy-author-artist Will James. And, around the time he began competing in rodeo, she enrolled Howard in art lessons taught by “this old retired guy who drilled me in the basics of perspective and shading and all that kind of stuff.” Post’s joint interests continued beyond high school. At the University of Arizona in Tucson, he enrolled as an art major and also joined the school’s six-man NCAA rodeo team. That led to him sometimes feeling like a misfit. “All of my fellow riders were ag and animal-husbandry majors,”he says. “So the art people thought I was weird, and the cowboys thought I was weird.” 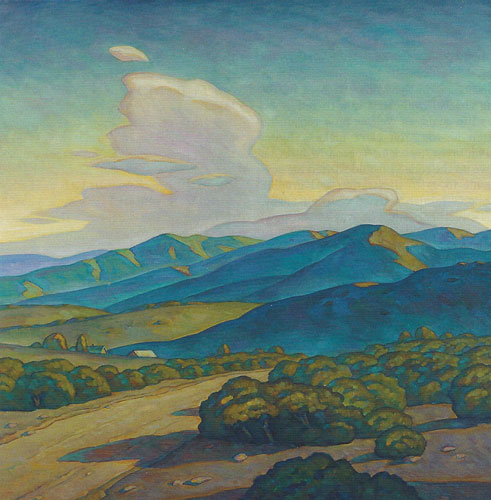 In 1967 and '68, Post took a two-year leave from school to serve as a Mormon missionary in the Midwest. That fulfilling time also allowed him to reflect on his life goals, as well as on a refrain he often heard: “You can’t make a living as an artist.” Back in Tucson in 1970, he gave up the rodeo life and shifted his academic focus to illustration and graphic design. He also married Marilyn Busby, his sweetheart since he was 15 and now, 44 years later, his beloved wife, mother to their five grown children, and a grandma 18 times over.

After Post graduated in 1972, he, Marilyn, and their first child moved to Salt Lake City, where he'd accepted a job as a designer and illustrator with LDS Publications. During his three years there, he honed his skills on a range of magazine and book projects. Then, in 1975, a call came from one of his former professors at the university to fill in for a faculty member taking a two-year sabbatical. Post jumped at the chance, as well as the opportunity it offered him simultaneously to earn a master`s degree. “That's where I really got to focus on finding my own style,”he says. At the time. Post had been painting cowboys “like a zillion other guys, he says, citing the inspiration he drew from his “heroes,” all members of the Cowboy Artists of America. But a key moment arrived with the advice of one of his professor friends. “He told me, ‘I want you to throw out all that stuff, go out to your dad’s ranch, and paint things you have firsthand experience with, the corrals and the steers and horses.’ I realized that was my thing” - by which he means an intimate, behind-the-scenes viewpoint of the ranching and rodeo life. 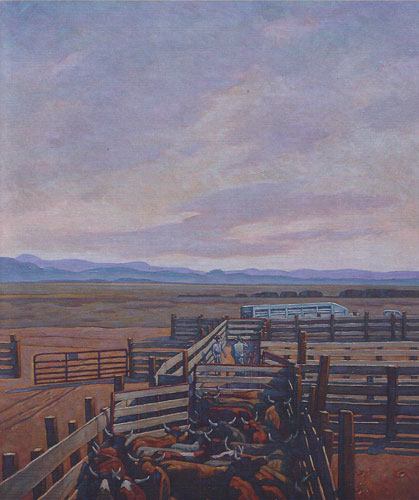 The resulting dozen or so large-scale canvases became Post’s thesis show. Attending it was Elaine Horwitch, who owned galleries in Scottsdale and Santa Fe that helped define contemporary western art in the years before her 1991 passing. She invited Post to join her stable of artists.

When Post received his master’s degree and stopped teaching in 1978, he launched into self-employment, with a home studio that was “set up at one end of the room with my illustration board and at the other end with my easel. If I wasn't at work on assigned illustrations,” he says, "I'd be painting.” Gradually, his signature style evolved. 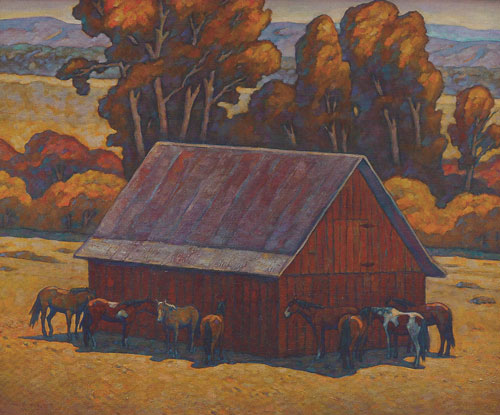 Take Post’s vibrant and unconventional colors, for example. “At first,” he says, “I was literal to the burnt-out earth tones in the West. But I found that pretty boring, so I started inventing my own colors that came out of my head and my hand.” His bird’s-eye perspective and the sharply angled shadows that often go with it, meanwhile, resulted from climbing up on rodeo chutes and grandstands. With such progress, his painting sales continued to grow to the point that, “about 1980, I wasn’t using the illustration end of the studio anymore.”

Interestingly, he found his works were displayed less in shows of traditional western art and more in those featuring contemporary paintings, along with those of other nontraditionalists including Billy Schenck, Ed Mell, and Tom Palmore. Chalk up that fact not only to Post’s unique talent but also to this simple fact: “Rather than the rowdy and romanticized stories that frequent the genre, he presents a realistic side of the West,” as Jerry N. Smith, Ph.D., curator of American and western American art at the Phoenix Art Museum, observes in his es­say in Western Perspectives, a large-format retrospective book published last year on Post’s work. Post himself likens his lack of romanticism to Edgar Degas’ behind- the-scenes images of weary ballet dancers, or Claude Monet’s endless studies of mundane haystacks near his home in Giverny - and then he instantly pulls the rug out from under himself, adding with a laugh, “We drop names like that, Monet and Degas!”

Post now works in a spacious but, he says, “pretty boring” studio behind his and Marilyn’s home in Queen Creek, about 30 miles southeast of Phoenix, where he keeps horses and cattle for the team-roping events in which he competes successfully on a semipro level. He uses a system of hooks and screws to hang his canvases right on the wall. From reference photos he snaps on his regular travels across the West, he’ll “find something that gives me a buzz” and sketch it out on a canvas using colored pencils or a Sharpie, working and reworking the lines until he has the composition he wants. “My canvases look really nasty until they get covered over,” he says, “because I’m interested in the painting, not the drawing. I know I can draw, so it’s just a means to an end.”

That end will usually involve four separate layers of paint from a palette that holds about a dozen different hues. “I find I can mix pretty much any color I want out of those 12 basics,” he says. With each layer, he likes to let parts of the previous ones show through, an effect that he’s heard some people refer to as a “glow,” though he himself finds greater interest in the resulting textures. “The last layer,” he says, “is where the work gets slow, where I’m worried about the details and the primal textures of the painting.”

Post continually worries at such matters. He’s ever vigilant against what he sees as “the great challenge for most artists who’ve achieved some success, which is resisting the temptation to copy yourself. I try to have a fresh thought once in a while and to make sure that my pieces are quality and have some integrity to them.”

Norman Kolpas is a Los Angeles-based freelancer who writes for Mountain Living and Colorado Homes &Lifestyles as well as SouthwestArt.