Watch the Arizona desert long enough and it will give you a mesmerizing variety of color: sunsets with cotton-candy pinks and glassy translucent oranges, red rock cliffs that turn into molten tapestries of gold in the retreating daylight, and shimmering violet shadows that drape the landscape in an intoxicating moodiness. These vibrant hues, and many others in shifting complexities across the color spectrum, are the stars of Howard Post's contemporary cowboy paintings that have brought a unique perspective to the West for more than 30 years. For Post, who lives in the rural Queen Creek area southeast of Phoenix, his use of color sort of just happened. “My color theory is that I have no theory,” he has said on multiple occasions. “I just paint the land as I see it and feel it.”

In addition to his stunning and delicate use of color, the Arizona artist is also widely known, collected and respected for his quiet cowboy scenes, including many images that show overlooked aspects of the Western lifestyle: steel cattle pens and the intertwining shadows they create, fence posts arranged in a row ready to be grabbed by gloved hands and hammered into desert sand, cattle loading chutes in various stages of decay and disrepair, barn doors and hay lofts that create abstract arrangements of line and form‘ against shingled walls, and cowboys admiring the stillness of the land before them. His figures have a peacefulness to them—they aren't conquering the Tetons or valiantly taming the wildness of the frontier. They are blue-collar cowboys making a modest living on rural farms, and enjoying every second while they do it. 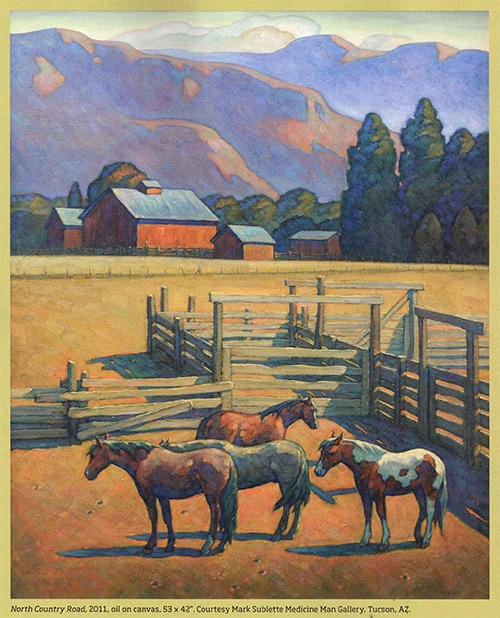 “l’ve done some action pieces, and I've enjoyed them, but l like the approach [Edgar] Degas had. He painted ballerinas and dancers, but rarely when they were actually dancing. He would often paint them right before or right after dancing. To me that always told a more interesting story,” Post says from his studio, adding that his figures or themes were never meant to tell a larger story about the West or its implications. “I’m not trying be a champion of the West. I'm definitely not making any kind of statement about the disappearing of the West. I love the West and love living it, but I don’t feel like I need to do that with my work. I'm just trying to react to places and things I see, subjects that I enjoy. I want to portray them in a setting and in a way that I like, and to bring my own personality into each piece.” That personality will be on view in the retrospective The West Observed: The Art of Howard Post opening October 26 at the Booth Western Art Museum in Cartersville, Georgia. The retrospective—-which will feature dozens of major oils, several pastel works and some rare bronzes—was conceived and curated by Christine Brindza, curator at the Tucson Museum of Art in Tucson, Arizona. After the Booth retrospective closes on February 4, 2018, it will travel to the Tucson Museum of Art and then the Desert Caballeros Western Museum, in Wickenburg, Arizona.

Tucson is Post's hometown, and his roots there, and elsewhere in Arizona, run deep. His grandparents originally passed through on their way to Mexico upon the request of Mormon leader Brigham Young, who asked families to travel south to colonize new communities outside of Utah. Later, the family was run out by Pancho Villa and found its way to St. David, Arizona, which is where Post's grandfather and father had made a home amid farms and ranches. There his parents met and married—his father was a bulldozer operator and later owned a feed store in nearby Tucson. All this makes Post a third—generation Arizonan, a rare feat in a state largely populated by transplants from the Midwest and California. It also means his heritage includes farmers, settlers, ranchers, pioneers, cowboys and all sorts of Western figures——a rich history for any artist.

“I used to want to be a cowboy like my dad, so when I was younger I would draw cowboys and such. One time my third-grade teacher took one of my pictures and entered it into an art contest with the newspaper the Tucson Citizen and it won first place, and I got my picture in the paper. So I blame my teacher for a lot of it. I don't know if I was any more gifted than any of the other students. It was just positive reinforcement," Post says. ’’I continued to draw after that and I was still involved with horses. My friends all thought I was kinda weird: my artist friends thought I was weird for being a cowboy, and my cowboy friends thought I was weird for being an artist—I was in no man's land.” 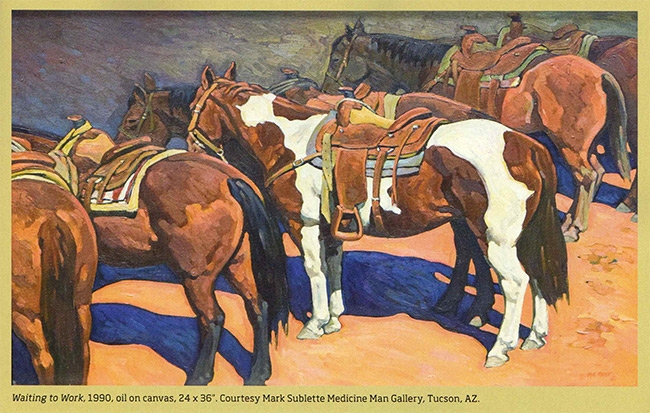 These early experiences with art were influential on him, and today he looks back on them with an invigorating perspective. “Don’t put your kids in art classes. Just give them some paper, pencils, pastels, paints...Let them mess with it,” he says. “Most kids are pretty creative, and by the time they're 13 or 14 years old that creativity has been taken out of them because someone has told them they can't make that tree purple—’No, you have to make that tree green.’ Young people need that creative control to explore freely.” This comes from someone who has, in fact, painted purple trees. And magnificently so.

As Post progressed through school, he eventually ended up at the University of Arizona, but was told that artists couldn't make a decent living and was ushered into majoring in graphic design and illustration. After graduation, in 1972, he met with two recruiters, one from Hallmark Cards in Kansas City—"I would have been painting pink bunnies on greeting cards,” Post says—and the other was the LDS Church in Salt Lake City, which had an art studio of 30 artists for its books and magazines. The choice was simple: his grandparents once trekked out of Salt Lake City, and here Post was trekking back three generations later. The illustration position was rewarding and it put him in contact with many of the church's most famous contract artists, including Kenneth Riley, Tom Lovell, Harry Anderson and a young Gary Ernest Smith, who shows with Post still today. During one assignment Post had to go to the studio of Arnold Friberg to photograph what would become one of the painter’s most iconic images, The Prayer at Valley Forge, a depiction of George Washington kneeling in prayer amid a snowy forest scene.

“We waited all day for him to finish the painting because he wanted to move Washington’s hat. So we waited while he was in the studio painting the hat out and then repainting it in a different spot,” Post recalls. “He did a lot of paintings for the church and he liked to have total control over all his work. He was an interesting guy.” In 1975, a teaching position at Post's alma mater opened up in Tucson. It would allow him to work with young students, as well as on his own easel work. “I wanted to take painting more seriously, so I started the master's program, and slowly started to paint more,” Post says. ’’I started trying to paint like the [Cowboy Artists of America] because they were my heroes and I was really into cowboys. It got sort of frustrating so I took out a camera and did a series of 40-by-60-inch paintings of corrals and cattle. I discovered my own thing: I was painting big and bold and direct.” 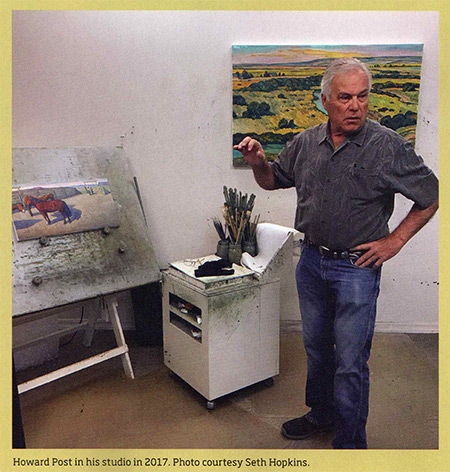 These works would eventually get him shown in contemporary galleries in Scottsdale, Arizona, and would, along with his expertise as an art director, lead to a position at an ad agency in Phoenix. By 1980, the gallery work was selling well, so he figured why not go all in. He's never looked back.

In the 37 years since then, Post's work has continuously expanded the definition of what Western art could be, and should be. It is delicate in substance and style, it invokes a calm and reverence that extends out of the canvas itself, it asks viewers to shift the color palettes of their visions into new directions, and it contextualizes the modern cowboy within a contemporary paradigm.

“It was awkward there for awhile when I started. I didn't fit in with the traditional themes, but I also wasn't real contemporary so I didn't fit there either. Cowboys were done very traditionally up to that point. Two or three of us were really exploring new things, including Billy Schenck. He and I and Woody Gwynn, we weren’t traditional artists, but we also weren't modern artists,” Post says, adding that artists such as Smith, Schenck and Ed Mell would make for great company as contemporary Western art made significant breakthroughs throughout the 1980s and 1990s. 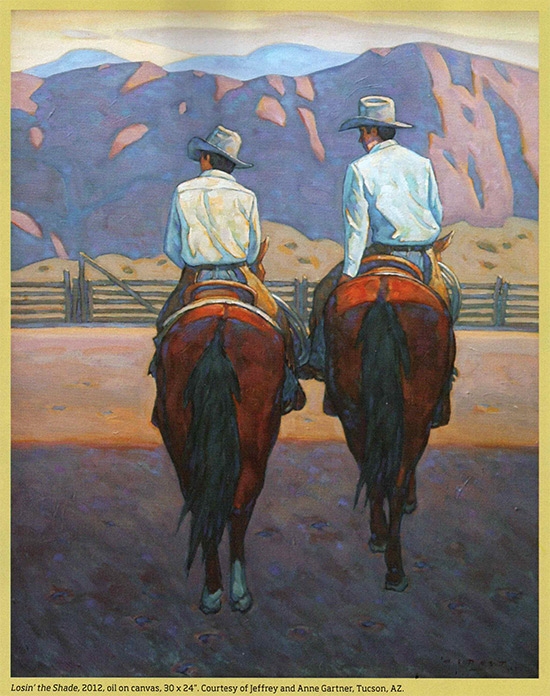 “What I love about Howard's works is he has a unique vision and perspective,” Smith says. “And he's a real cowboy, a real rodeo guy. He's as authentic as it gets. He paints like Ed and I do, in that we take our subjects and put them in a hopper and reinterpret them. Howard's not looking at life as it is—he creates art out of how he feels, how he wants to use color, how he sees the symbolic qualities of the world. He also paints in a timeless way.”

Artist and fellow Arizonan, Mell, who's also shown with the artist in exhibitions around the country, says Post exemplifies what contemporary Western art can be. “He just takes an honest, close look at things, and that creates a sense of who he really is,” Mell says. “This allows him to have an abundance of freedom to explore his modernist approach with an emphasis on design, abstraction and color.”

Booth Museum executive director Seth Hopkins, who’s known Post for a number of years, says he respects the art, but also the artist. “He's very unassuming, quiet and incredibly humble. I think he's amazed he's had the career he has, and he feels incredibly lucky to be where he is. He could easily be a much different person, but he's very down-to—earth, very unpretentious,” Hopkins says. “He won an award at the Prix de West one year and he got up and said something like, ‘Is this Armageddon?’ or something like that, suggesting it was a fluke. But to the people that were there, they were paying attention and were quietly seeing the quality of his work. You could spot one of his pieces from 100 yards away, because he was doing things just a little different than everyone else, and it was marvelous.” 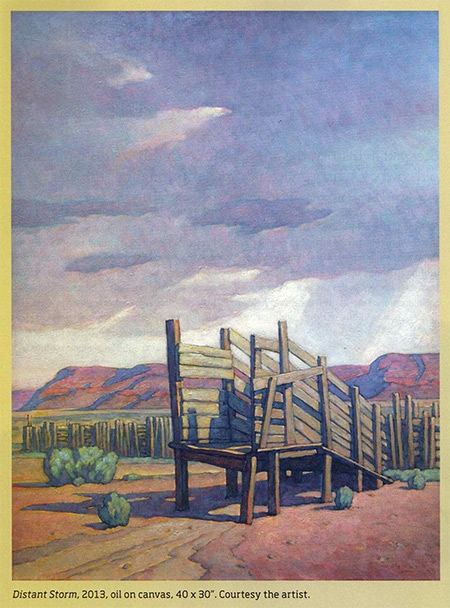 Today Post still rides and still ropes—his most recent interview with the magazine was done on horseback. “Still do it all, much to my wife's chagrin,” he adds. He and his wife, Marilyn, have ﬁve children and 18 grandchildren. He's still the quiet and deeply humble painter that many artists, museum directors and collectors continue to praise. And he also still pushes colors into directions few Western painters are exploring.

“I always knew I wanted to deal with the West, even as a kid. But I wanted my approach to be unique and from my own perspective,” he says. “If I could always bring those insights to my work, I would also be happy with what I was making. And that's what I've always done."