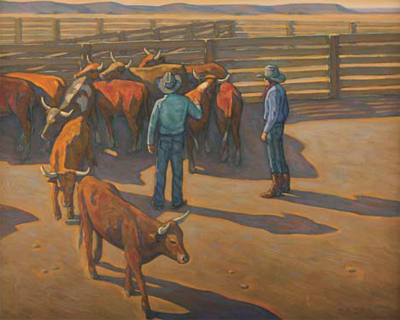 In third grade Howard Post decided to become an artist. When he was told he couldn’t make a living as an artist he became an illustrator. That career exposed him to many different approaches and subjects and taught him discipline.
“You can’t sit around waiting for inspiration,” he says.

Today, this native Arizonan is considered a master impressionist who shows the contemporary West in a modern fashion. For over 30 years Post has created a reputation for his consistency in subject matter and approach. Since this path has proven successful he figures why change.

Post, the son of a cowboy and a former competitor with the Professional Rodeo Cowboys Association, remains true to his ranching heritage in his paintings of corrals, carrel, cowboys, rodeo arenas and ranch life – subjects he has known since childhood. Looking around his studio he notes that most of his artwork has horses in the landscapes. He calls them inhabited landscapes or “ranchscapes.”
“Not too often do I just do a pure landscape. Most often they’re fences, animals, or working cowboys,” Post explains. 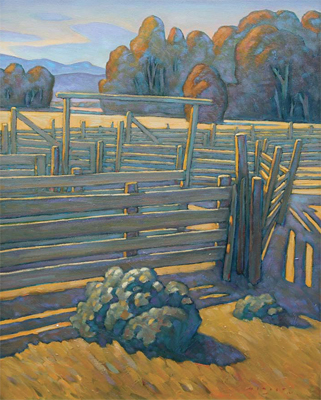 While landscapes have been a common, almost incidental, element in his oil paintings, recently they have become the focal point. Medicine Man Gallery will spotlight Post’s latest work in a solo show that opens Aug. 1 at its showroom in Santa Fe, N.M. Titled The Western Landscape, this exhibition will feature a variety of pieces that range in size from 18 by 24 inches to 60 by 48 inches, his largest oil.

All of Post’s paintings are based on real images and photos he has taken while traveling around the country. Following an impressionistic – even a post-impressionistic – style he aims to convey the contemporary West as he knows it. Although inspired by actual places, his work reflects universal scenes.

“I don’t work from a preconceived idea. I respond to what’s out there,” says Post. “In most of these you couldn’t recognize the place.”

Post is noted for his use of simplified design and a limited palette that takes otherwise mundane subjects and transforms them into visually interesting images.
“Over the years I went from literal use of color to adding a personal sense of color to it,” he says. 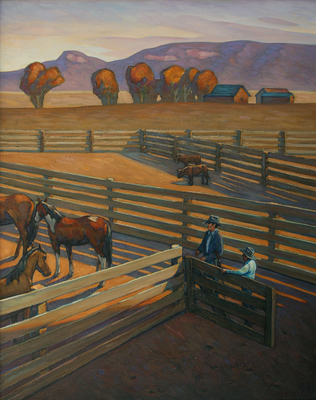 Many of his paintings take on an abstract appearance but not in the sense that elements are unrecognizable. An ideal example of this can be seen in his latest piece titled Behind the Working Chutes.

“What’s always intrigued me about this type of piece is the abstract quality of the corrals. They’re like mazes. That’s the first thing that caught my attention,” Post explains. “The juxtaposition of the bushes and trees against the fence becomes almost an abstract shape as well.”

Known for his unique aerial perspective and sun-drenched hues, Post’s work is defined by orderly, strong shadow patterns cast by the figures of cattle, cowboys, trees, or fences. In his new oil, Leaving the Barn, Post interplays with several of these elements while incorporating geometric patterns of the corrals and insinuating the presence of the building.

In Finding #37, what’s interesting is the movement of the cattle. These cattle become a geometric abstract shapes that create a movement there and the patterns of shadow and color. That’s what captures my interest initially,” he says.
Post frequently turns his figures and animals away from the viewer and Out West is no exception. Based on an actual encounter, the pose of the mule struck a chord with him and inspired this rendition.

“People say ‘why can’t you do faces.’ To me, if you put a face looking out that becomes the focal point. To get away from that I’ll turn them away so the person or animal becomes part of the composition instead of a portrait.”

Post’s painting In the Bull Pen differs from past work in his unusual use of negative space that emphasizes a solitary border collie herding cattle. Such quiet scenes appeal to collectors of Post’s work, many of whom are sophisticate art aficionados who frequently praise his use of color and the natural design qualities of the pieces.

Post shies away from explaining his work in detail as he feels it takes the mystery out of it. “ Viewers want to create their own story behind an image,” he says. “Finding a category for my art has always been a challenge. It’s almost like music, there’s some that you can’t put in a category.”