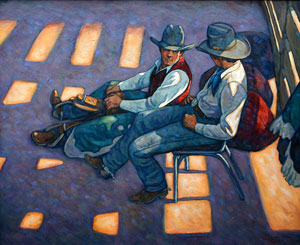 Known for his paintings of cattle, cowboys, rodeo arenas, and ranch life executed with a unique aerial perspective and sun-drenched hues, Howard Post is an impressionist who portrays the contemporary West in a modern fashion. Howard Post, a native Arizonan, was born and raised on a ranch near Tucson. Not surprisingly, he gravitated toward the life of a cowboy. The family ranch raised rodeo stock, and as Howard Post gained experience, he started to enter rodeo competitions. In time, he became an Arizona High School All-Round Rodeo Champion, a member of the University of Arizona rodeo team, and eventually, a competitor with the Professional Rodeo Cowboys Association. After Howard Post completed bachelor’s and Master’s degrees in fine art at the University of Arizona, he taught there for two years. 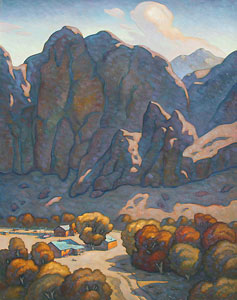 Howard Post worked as a commercial artist until 1980, when he decided to paint what he knew best, Arizona’s ranch traditions. Viewers of Howard Post’s oils or pastels respond to a bird’s-eye view of cattle clustered in a corral, cowboys perched in fence rails, or a distant ranch house. This higher perspective endows people and animals in the painting with stronger shapes and patterns. Howard Post draws from a collection of several thousand slides, from imagination, and then starts a canvas without preliminary sketches. Up to six colors might be used, painted over a dark background. His work is defined by orderly, strong shadow patterns cast by the figures of cattle, cowboys, trees, or fences. 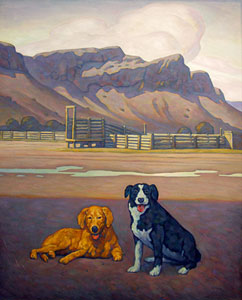 Howard Post’s oils and pastels have been included in numerous exhibitions throughout the United States. Many of his paintings are represented in public, corporate, and private collections. 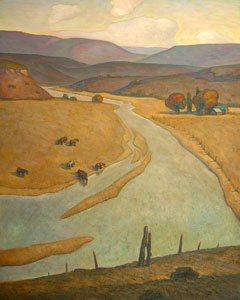