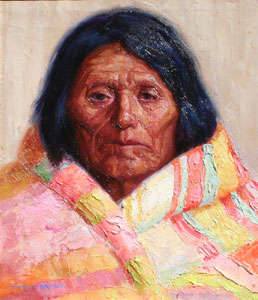 Born Hendrikus Cornelius Balink on June 10th 1882 in Amsterdam, Holland, Henry learned early on that he would have no support from his parents to enter the art world. At the age of eleven, he financed his art training at the Royal Academie of Amsterdam by working as a bicycle racer and ice skater and by working as a stuntman for an American film company. He was also awarded the Queen Wilhelmina Merit Scholarship, which helped him attend the school as a pupil of C.L. Dake, van der Waay, and Derkinderen from 1909 to 1914.

With the onset of World War I in 1914, Henry Balink and his new bride, Maria Wessing, immigrated to New York City and where he took on the name Henry Balink. On assignment from the Archaeological Museum in Berlin and the Louvre in Paris, he began copying works at the Metropolitan Museum of Art and soon became employed by them.

Chicago was his next destination where he began doing murals and taking on private portrait commissions. Though he had some success at this, Henry Balink was fascinated by the travel poster he saw in a railroad station about Taos, New Mexico. This led to a brief stay there in 1917 and occasional trips to the Southwest until, after returning home from a visit to Holland and Germany in 1922, he and his wife moved to Santa Fe permanently in 1924. His made his home and studio on Old Pecos Road for the remainder of his life.

Henry Balink's artistic training was in the classical Barbizon school of tight brushwork and a gray-brown palette. The intense colors of the Southwest landscape inspired him to brighten his palette. His excellent background as a skilled draftsman prepared him for the subject matter of the American Indian portraits of over sixty-three tribes that he painted. In 1927 Henry Balink was commissioned by the Marland Museum in Ponca City to paint portraits of Oklahoma's Indian chiefs. Balink's vibrant portraits of the Indians were highly successful, so much so that the jealous members of the Taos Society of Artist tried to have Balink deported, accusing him of espionage.

In the 1930s Henry Balink taught art and sculpture at the Santa Fe Indian School. After the second world war, he trained George Phippen and advised Dwight D. Eisenhower on his beginning painting efforts. Henry Balink invented a new type of crayon and worked on perfecting a duo tone etching technique that he had begun learning while he was at the Royal Academie. He also carved fine furniture as well as creating beautiful frames which were sold with most of Balink's paintings. Many of these works hang in the Gilcrease Museum in Tulsa, Oklahoma and the Museum of Fine Art in Santa Fe, New Mexico. Henry Balink died in Santa Fe in 1963.