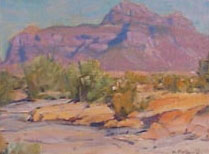 Hanson Puthuff is known for his plein air landscape paintings of California and Arizona.

Puthuff was born in Waverly, Missouri, the son of a struggling carpenter named Alonzo Duvall.  Upon his mother's death when he was two years old, Hanson was given to the care of his mother's close friend, Elizabeth Puthuff, a Civil War widow who supported herself as a seamstress.  Puthuff raised him until age six and then again from age fourteen on, the intervening years having been spent in the care of various relatives in Kentucky.  He remained close with his foster mother and later took her name.

Puthuff attended classes at the Chicago Art Institute before Elizabeth and he moved to Colorado in 1889.  In 1893, he enrolled in the art school at the University of Denver and later studied at the Chicago Academy of Fine Arts.  He worked for a time as a commercial artist in Peoria before returning to Denver where he found work as a sign painter for an advertising firm.  In 1903, Puthuff moved to Los Angeles and took jobs painting signs, billboards, and scenic backdrops.  He later went to work for the billboard giants, Foster & Kleiser.

Throughout his commercial career, Puthuff did easel painting on the side and also taught private art classes.  When he moved to California he was most interested in figure painting, but his love for California's majestic scenery led him to focus almost exclusively on plein air landscapes.  In 1926, Puthuff decided to leave commercial art in favor of easel painting.  He traveled extensively around the state and accompanied Edgar Payne on painting trips to Canyon de Chelly and the Navajo Reservation.  His first large commission was from The Santa Fe Railway which sent him to paint views of the Grand Canyon.  He created backdrops for habitat exhibits at the Los Angeles County of History, Science, and Art, and for the Theodore Roosevelt Memorial at the American Museum of Natural History in New York.