When Logan Maxwell Hagege was a young boy, his family made frequent road trips from his home in the Los Angeles area to Palm Springs, where his grandmother lived.  The desert terrain held a certain allure for him even then.  As an adult, memories of the minimalist beauty of those, arid, scrubby desertscapes would return and eventually capture his imagination as subject matter for his oil paintings.  The simple, graphic shapes of clouds and mesas would come to inhabit his atmospheric scenes of the Southwest and its indigenous peoples, the Hopi and Navajo tribes.  And the hues of the desert would slowly evolve into his palette of choice – burnt orange, rust, crimson, gold and bronze. 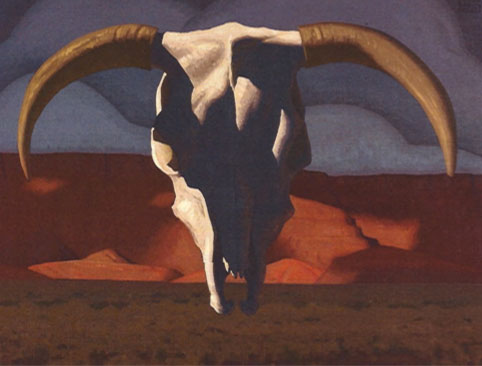 Today, at 34, the Los Angeles-area artist has already experienced much success with his visual interpretation of this rugged yet picturesque terrain.  Hagege is a regular participant in some of the western regions’ top juried museum shows – often among the youngest artists included.  For the past four years he has been invited to the Coors Western Art Exhibit and Sale in Denver, and this year he as honored with the Artists’ Choice Award, a valued recognition from his peers.  This year also marked the painter’s first appearance in the prestigious Masters of the American West show held at the Autry National Center in Los Angeles, and later this year Hagege’s work will be on view in the Quest for the West show at the Eiteljorg Museum in Indianapolis, IN.

If that isn’t enough recognition for an artist not yet 35, Hagege can also boast that his paintings are held in the permanent collections at the National Cowboy & Western Heritage Museum in Oklahoma City, OK, and the Booth Western Art Museum in Cartersville, GA.

None of this surprises Mark Sublette, president of Medicine Man Gallery.  Sublette has followed Hagege’s progress since the artist was in his early 20’s.  In February, the gallery presented a selection of Hagege’s work in a show titled The Young Guns, along with works by Josh Elliott an Glenn Dean.  “It became apparent to me three years ago that Logan had matured into an artist with serious painting chops, a force to be reckoned with,” Sublette says.  “Recognition of his work by the art-collecting community has exploded in the last year.  I talk about his work so often that I can now pronounce his name perfectly, Hagege (ah-zhezh), a name that won’t be forgotten anytime soon.”

Southwest Art has also followed Hagege’s career from his early 20’s, acknowledging his emerging talents in an Artist to Watch column published in 2003.  The following year, when he was still only 23, the magazine published a four-page feature article spotlighting his work.  Hagege’s subject matter has changed significantly since then.  In those days he trained his creative eye on sunlit beaches, often sprinkled with abstracted figures, or street scenes. 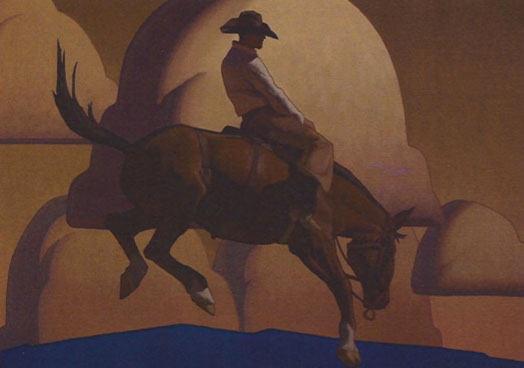 At times the pastel-hued, light-filled canvases evoked a romantic sensibility of a bygone era.  These paintings, Hagege says, were inspired by his admiration for the Spanish painter Joaquin Sorolla (1863-1923).   During that time, early in his career, he explains that he was still finding his visual voice.  “I enjoyed painting them because they lent themselves to experimenting and playing with composition, color, and texture,” he says. “I like subjects that allow me to experiment and explore and don’t close me in to much.”

But about that time, Hagege went on a trip that would become a turning point in his career.  A cadre of California artists, including Calvin Liang, Mian Situ and Charles Muench joined up for a plein-air painting road trip to Arizona’s Canyon de Chelly, spending a week capturing the arid terrain.  The painterly odyssey was followed up by a show of these works at Trailside Galleries in Scottsdale, AZ.

A year later, Hagege took to the road again, this time with landscape artist Glenn Dean.  Hagege painted the Southwest’s natural wonder once again, capturing the imposing red-rock formations and deep canyons.  The foray cemented his U-turn toward new subject matter and what has become his signature modernist style.  “The landscape felt really geometric to me and lent itself to interesting picture-making,” he says.  “That trip really got me going.  I wasn’t showing the work at that point.  I wanted to make sure I was comfortable putting it out there.”  In 2007, Hagege finally put is new work portraying Native Americans and the southwestern desert before the public in a show at Giacobbe-Frtiz Fine Art in Santa Fe.

While it may seem, at first blush, that the young artists has grown in prominence with unusual ease, the truth is that he has been nurturing his interest in art for years, all the way back to elementary school.  When Hagege’s class took weekly field trips to the library to read, he sat in a corner and drew Marvel comic book characters instead.

Knowing he wanted a career in art, after high school he enrolled in an atelier-style program in Sherman Oaks, CA.  For two years – five days a week for nine hours a day – he painted and drew from life.  At lunchtime, he and his fellow classmates stepped outside into the Southern California sunlight and drew the landscape.  Not satisfied with the daily art education, he searched for additional teachers to supplement it, choosing figurative artist Ssteve Huston and landscape painter and colorist Joseph Mendez.  With Huston he practiced life drawing and painting twice a week, and with Mendez he took part in a critique of his work once a month.

During his studies, Hagege also did an internship at an animation studio and was eventually hired by the company.  At first the job appealed to him, but after about six months, he decided otherwise.  “I had a taste of it, and I hated it.  It was not what I thought it was.  You didn’t need any creative vision,” Hagege recalls.  “I loved painting and drawing, so I quit.”

Today Hagege works in an industrial warehouse building in the San Fernando Valley.  The 2,400-square-foot space with 20-foot ceilings is well suited for his large-scale works, such as Evening Song at 72 by 92 inches or The Rain Falls at 80 by 52 inches.  Moving back and forth in scale offers him creative challenges, he says.

Hagege ventures out on road trips across the Southwest on a regular basis, with destinations ranging from Georgia O’Keeffe’s Ghost Ranch to Arizona’s Vermilion Cliffs.  Such locales are breeding grounds for new ideas, offering him concepts and compositions for paintings as well as the opportunity to gather reference material.  In August, on his next big painting journey, he hits the open road for Moab, UT - an area once painted by another California artist with a fondness for desert landscapes, Maynard Dixon (1875-1946).  Indeed, Hagege cites Dixon as well as Austrian figurative painter Gustav Klimt (1862-1918) as major artistic influences.

As this story was going to press, Hagege was busy in his studio creating works for three separate gallery shows on view in August, including a solo show at Gerald Peters Gallery in Santa Fe that features about a dozen new paintings.  For collectors, the show also offers the chance to view Hagege’s new direction in subject matter.  A few works, such as Above the Mountains, depict cowboys and rodeos.  Hagege also plans to include portraits of Hopi kachina dolls. 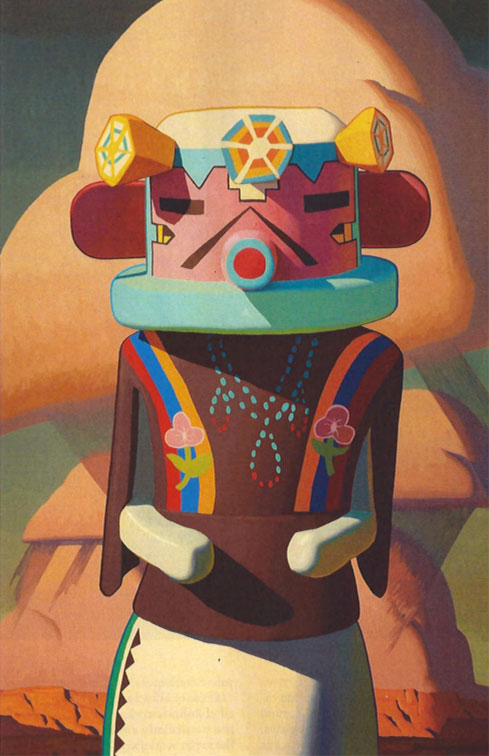 No matter what he is depicting, his goal is always to “dig deeper” into the subject matter, finding new ways of seeing and painting the land, the human figure, and objects.  Like many artists, he is also constantly assessing and capturing the light’s impact on the world.  Hagege considers his evolution in art to be never-ending and his education on-going.

There is no special message Hagege sets out to convey in his paintings.  Rather, the artist says, his goal is to let the painting unfold and take on a life of its own.  “I just let it happen and let the control go,” he says.  “I let the painting talk to me and tell me what to do next.”

Bonnie Gangelhoff is a senior editor at Southwest Art.