The Solitude of Space: Gregory Konos' vivid paintings reflect the loneliness of the land by Donald J. Hagerty 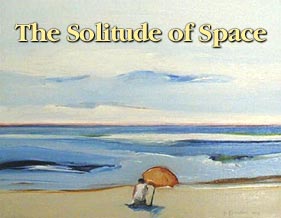 In Gregory Kondos’ home in Sacramento, CA, art is everywhere - on all the walls, stacked behind chairs. He has his own striking, highly realized work as well as paintings by his friend Wayne Thiebaud, drawings by Maynard Dixon, and small oils by early California artists Gottardo Piazzoni and Xavier Martinez. All of these artists have been able to see the world around them with great clarity. So, too, does Gregory Kondos. Now almost 76 years old, Kondos has the mannerisms of someone half his age; ruggedly handsome, gregarious, animated, driven by restless energy, he has an infectious love of life. "Why paint?" he asks rhetorically. To Kondos, the question might as well be, "Why live?"

Born to Greek immigrants in Lynn, MA, Kondos moved with his family to Sacramento in 1927. His parents encouraged his interest in art; and by 1941 he had enrolled at Sacramento Junior College (now City College) to study art. This education was interrupted, however, in 1943 by three years of active duty aboard an aircraft carrier in the Pacific during World War II.

Upon his discharge in 1946, Kondos completed his degree, spent a year at the Art Center College of Design in Los Angeles, and then switched to California State University, Sacramento, intent on a college teaching career. In 1958, after he had completed his bachelor’s degree and begun studying for a master’s, he accepted a position in the art department at Sacramento Junior College. Kondos taught classes for 24 years, retiring in 1982. In honor of his dedication to art and to students, the campus art gallery, which he founded, is named after him. 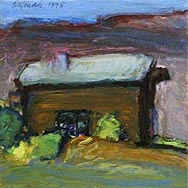 Some of Kondos’ first landscapes were influenced by Willem de Kooning and other abstract impressionists. Inspired by Thiebaud’s work, though, and their close association, Kondos gradually shifted toward the painterly realism that is now the hallmark of his art. He won the first of many awards in 1962 and has participated in numerous solo and group exhibitions since then. Important recognition for his painting came in 1995, when he was elected to membership in the prestigious National Academy of Design. And last October Kondos completed a 570-foot-long scene depicting the Sacramento River delta in colored and etched transom glass for the front entrance of a new terminal at the Sacramento International Airport.

Sketching outdoors is the foundation of Kondos’ landscape paintings. Everywhere he goes, his sketchbook is his trusted companion. And the studio adjacent to his home is always jammed with small pastel, pencil, and pen-and-ink sketches done on his painting trips. "Drawing is the skeleton under the flesh of a painting," he says. "It is where art begins. Drawing helps me to understand the landscape better, and it doesn’t allow me the luxury of covering up problems in the composition with color." His palette is simple, without a complicated tonal scale, and the colors are high-pitched. Blue, especially cerulean blue-suggestive of air and water-often permeates his canvases.

Thiebaud suggests that Kondos is something of a classic painter: big cobalt-blue skies, large areas of evenly applied solid color, and a strong reference point are common elements in his work. And in the catalog for an exhibition of Kondos’ Yosemite work, an essayist wrote, "It is always high noon on a summer day in his landscape paintings." Without exception, Kondos’ paintings appear solid and manifest under the bright, sapphire light of day.

In the early paintings he would pick at the canvas with his brushes, but then he began to take what the abstract expressionists did and apply it to his landscape painting. Now Kondos skates across a canvas, his cultivated brush stroke all about flow, about completing the line and completing the thought in his mind. Always there is organization, a marching rhythm of design. Simplification - an economy of means - is a Kondos trademark. "Less is better," he says. "What is left out makes the picture more understandable."

Most importantly, the paintings mirror his own thoughts. Kondos paints not only what he sees in the landscape but how he sees it-his reflective vision made visible on canvas. "If you look at my work, you will discover I am a loner. My paintings possess quietness and cleanliness, but they also have a lonely quality," says Kondos. He likes to compare his approach to a canvas to that of a wolf closing in on its prey - unseen, watchful.

In a Kondos painting there is no symbolism or allegory and little in the way of narrative. By virtue of color, fluid brush stroke, and his delight in the physicality of paint, though, his graceful landscapes reflect an earthly paradise. There is always space and order, simplicity of theme that is reflected in his technique. The presence of human life may occasionally appear in a painting, but for the most part his work is about the profound loneliness of the land.

In 1963, Kondos took a leave of absence from his teaching post, sold his home, car, and most of his possessions, and departed with his family for a 10-month stay in Greece. The break brought him new perspectives on painting. The blue sea, the solid geometry of white buildings, and the clarity of the air helped him learn more about the use of color and light. Ironically, Kondos didn’t paint in Greece; instead he returned with a large number of drawings and a new sense of purpose and direction. In the years since that first trip he has made 36 pilgrimages back to Greece.

In addition to his native country, Kondos returns time and again to other special landscapes, including the Sacramento River delta and Yosemite National Park. The Sacramento River, in particular, has long been a favorite subject. Hemmed in by an elaborate system of levees, it flows eventually through a confusion of delta islands and sloughs, then into the San Francisco Bay. The levees are some of Kondos’ favorite haunts, with their horizontal lines stretched out against the continuous ribbon of the languid water. Occasionally a Victorian farmhouse rises above the levee line; sometimes trees that line the banks join the flow of life along the river. In the silence of this world, his paintings joyfully celebrate the spiritual connection between water and sky.

About a five-hour drive from his home is Yosemite, a vertical world whose splendors he first encountered on wilderness backpacking trips in the late 1980s. He was chosen as one of the park’s artists-in-residence in 1990, and during his one-month stay he found a wealth of material waiting to be translated into paint - Half Dome, El Capitan, and Bridal Veil Falls, among other landmarks. Every day he hiked to promising vantage points with his sketchbook, easel, paints, and brushes. The paintings he created are both panoramic and intimate, populated with Yosemite’s big elements and interpreted with order, structure, and grandeur. He has returned to the park as an artist-in-residence several times since his first stay. 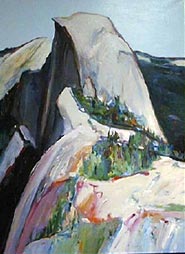 In recent years the Southwest has also called to Kondos. He and his wife Moni recently purchased a home in Santa Fe, and from that base he explores places like Canyon de Chelly in northeastern Arizona and Chaco Canyon and the region around Abiquiu in Northern New Mexico. "Out here I work like an Indian - quiet, solitary, involved with the landscape, the earth colors, and the presence of something spiritual," says Kondos. He finds Canyon de Chelly especially magical. Here, Kondos can see and paint the effect of light as it plays on the vertical red sandstone walls. Centuries whisper from this canyon labyrinth, silent testimony to the agelessness of the land. For Kondos, it is a sacred landscape of the heart.

Canyon de Chelly and the Abiquiu area have become the equivalents for Kondos of Cezanne’s native Provence, their cubist, angular forms illuminated and charged by the blazing light. Over the years Cezanne has been his inspiration, and Kondos devises some of his pictorial approaches from a longtime study of that painter. "By understanding artists like Cezanne, I became myself," he says. But whereas Cezanne’s painting surface flickers with energetic color within color, Kondo's canvases are more serene, endowed with the presence of solitude.

His paintings today are richer, more confident, potent, and expressive than they have been in the past. Yet Kondos remains driven. Someone recently asked him what he would like to return as in a second life. Without hesitation he replied, "a better painter." 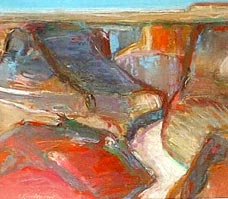