Gregory Kondos - "Nature Was My Teacher"

Gregory Kondos - "Nature Was My Teacher"

A museum curator and lecturer at the Plein Air Convention & Expo reviews the long career of an important California artist, and a show organized by the author, A Touch of Blue: Landscape Paintings by Gregory Kondos

by Scott A. Shields 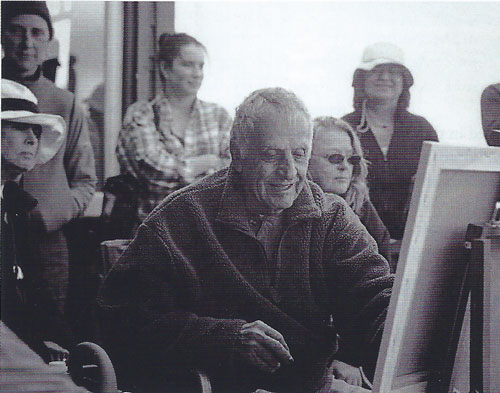 Among the varied landscapes Gregory Kondos (b.1923) paints, the terrain around Sacramento, California – wild, cultivated and altered – has been his most inexhaustible source of inspiration. The flat expanses, waterways, and atmosphere of California’s Central Valley are signature elements of many of his paintings and imbue his work with an undeniable spirit of place. He has embraced the local rivers and levees, emphasizing their horizontality, and captures the region’s prevailing light through warm, rich color that is flat and clean. 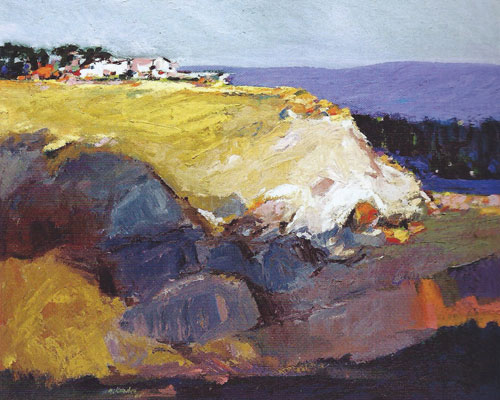 Certainly Kondos has had a long time to get to know this landscape. He moved with his parents to Sacramento as a toddler in 1927 and obtained his degrees locally, at Sacramento Junior College and Sacramento State College, with an important stint in between at the Art Center School in Los Angeles.(1) He went on to teach at Sacramento City College, all the while rendering the unique landscape of California’s Central Valley and traveling to paint scenes of Yosemite and the Sierras, the American Southwest, France and Greece.

Next to his California subjects, Kondos has painted the last most frequently. It was in Greece the he learned his palette of blues and whites, and there that he discovered the solid forms and simple geometries of boldly shadowed buildings. Drawn by heritage, he made his first visit to his parents’ homeland in 1963 and has since returned some 50 times. He combined the early lessons he learned in Greece with his California training, his familiarity with the Golden State’s landscape and light, his study of early 20th-century French masters, and the influence of his regional artistic contemporaries to achieve a style that is immediately recognizable and, somehow, conspicuously Californian. 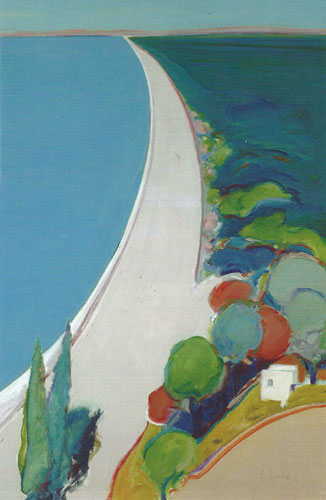 Courtesy of the artist

Like most artists who trained in the late 1940s and early 1950s, Kondos learned and began working in the then well-established style of Abstract Expressionism. He also felt the impact of the Bay Area Figurative painters, who applied an Abstract Expressionist approach to representational subjects. It is no coincidence that an early Kondos landscape such as his 1960 Landscape, Fair Oaks, a depiction of a community east of Sacramento, would have much in common with the work of these “Bay Area Figuratives.” Kondos was content to produce colorful, loosely painted works like this for a few years, but was growing eager to find a voice uniquely his own. He credits Sacramento artist Wayne Thiebaud with helping him to develop his own painterly brand of realism.

In 1961, as Kondos was struggling to find his footing, he submitted a highly abstract painting of Greek ruins, rendered from photographs, to the California Palace of the Legion of Honor. It won a prize, prompting him to consider other Greek subjects. He certainly new much about Greek culture through his upbringing, but he had not visited the country itself. In 1963, he decided to sell his home and move his family to Greece. The trip would last 10 months.

Kondos painted very little in Greece, but spent a lot of time looking. “Nature was my teacher,” he recalls. “My eyes were burning from looking for 10 months, but the experience changed my life, (it) improved my vision – set me straight mentally.”(2) The change in his art was immediately apparent, and his means of representation moved beyond works like Fair Oaks to become more straightforward and austere. He retreated from the prevalent yellows of his early work toward quintessential Greek whites and blues – especially blues – and at the same time abandoned his loose, gestural method for a smoother style of solidity and weight. He also painted at sunrise and sundown, exploiting shadows and explaining that “before I was putting down an American Impressionist idea with no shadows. Once I realized the shadow was the strength of the object and gave it stability, I began to change my approach to landscape.”(3)

From that point forward, Kondos sought to reduce, refine and hone his landscapes to their essentials. He typically begins by sketching directly from nature in charcoal or pastel, working on paper or small canvases, and then adds washes and outlines in bold color, typically red or orange. Although he occasionally produces canvases of three or four feet in the field, most works done outside are smaller. These not only become finished paintings in their own right, they often double as studies for larger works. 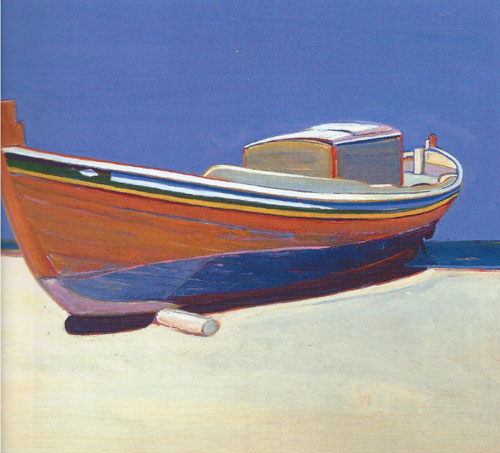 Collection of Nick and Catherine Margaros

Kondos has stated frequently that he simply wants to be known as a landscape painter, but in the 1960s, in close association with Wayne Thiebaud and other California “Pop” artists, he painted numerous works with an upbeat, graphically inspired look. His 1965 painting Long Beach, for example, feels Pop in its serially repeated beach umbrellas and long-format composition, the latter providing both a title and a bun. Caique is a similar formal observation, featuring a colorful boat reverberant in complementary blue and orange. The boat is not sailing; there is no owner in sight. It simply sits on the beach with the impassiveness of a still life, just as a slice of Thiebaud pie might rest on a bakery counter.

Caique was included alongside some 50 other paintings and drawings in Kondos’ most important exhibition to date, Paintings by Gregory Kondos, which was held in San Francisco’s California Palace of the Legion of Honor in early 1969. The exhibition marked a turning point, and in his paintings that followed, Pop’s buoyancy and optimism began to wane. In his works from the early to mid-1970s. Kondos’ efforts to single out and segregate his subjects resulted in a sense of solitude and even existential loneliness. The feeling of isolation in his 1975 painting Lifeguard is palpable. The protagonist is centered squarely in a landscape devoid of activity, his flag and its reflection intersecting with the horizon to form a perfect cross, which subluminally brings an almost religious reverence to this bit of coast.

This prevailing sense of isolation continued through the 1970s and into the 1980s. Kondos’ Sacramento River is without figures, although human presence is marked by outlying telephone poles, a road sign, and buildings. Yet all these remain subordinate to the landscape and to Kondos’ underlying calm and order. The work is whisper-quiet and seductively simple, just as the artist’s application of paint is pristinely clean.

The reductive simplicity of this and river scenes like it led Kondos to a turning point, and he intuitively felt that he needed to pursue other subjects and approaches. As the 1980s dawned, his paintings became less minimal. He found more verdant terrain in the lush vineyards and picturesque white buildings of Napa and Sonoma Counties. These paintings were less concerned with space and focused instead on nature and its cultivation. The series  with a monumental work, Rutherford Vineyard. This painting’s true subjects are grapevines and shadows, which occupy four-fifths of the composition. As in the other vineyard paintings, grape leaves are rendered as calligraphic abstractions in pure, saturated color, and foreground vines and posts become identifiable only at a distance when accompanying buildings and trees come into view. 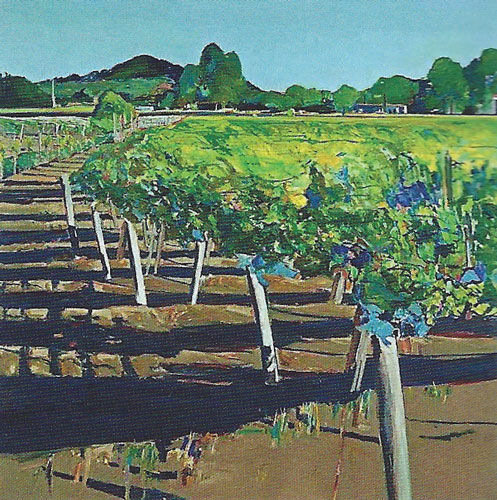 Even as he completed Rutherford Vineyard, Kondos was becoming restless. Fate intervened in 1989, when he was invited to participate in his first back-country excursion in Yosemite National Park, a trip that promised the opportunity of fresh subject matter with a new emphasis on sublimity. His initial expedition to Lyell Canyon would be the first or several such outings Kondos would make in the early 1990s as one of the park’s artists-in-residence. During these month-long residencies, he captured scenic vistas in charcoal or pastel sketches and small oils that often went on to inspire larger works. Initially, he found that representing the colossal scale of Yosemite landmarks was not easily achieved. Accustomed to landscapes that were oriented horizontally, especially in Sacramento, he suddenly had to deal with steep verticality. To capture the sense of awe that Yosemite’s monoliths inspire, he made foreground objects smaller than in actuality, extended the height of granite walls, and skewed perspectives to communicate a sense of power and scale. 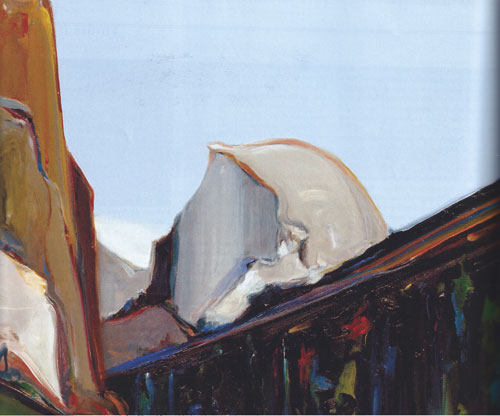 As Kondos began to favor scenes of untrammeled wilderness in Yosemite, he also began to seek inspiration in the Southwest. A self-described loner, Kondos felt at ease in this environment. After serving as a resident artist and teacher at the Santa Fe Institute of Fine Arts in 1995, he established a second residence in the historic New Mexico town.

His approach to the Southwestern landscape was distinctly post-War in origin, and he pushed the terrain’s chromatic brilliance to a degree far beyond what actually exists. Rocks of red-orange, pink and yellow are rendered in wide, colorful bands that are based in reality but depicted as modernist strips. He has also portrayed the topography around Abiquiu in northern New Mexico, where Georgia O’Keeffe lived and painted, most frequently depicting Mt. Pedernal, one of O’Keeffe’s most iconic landscape subjects.

Even in his late 70s, Kondos remained eager to pursue new opportunities. One presented itself in 2001, when he was invited to spend two weeks teaching a painting workshop in France, a trip that would prove defining. From that point forward,  he spent extended time in France and began to add the country’s landscape to his repertoire, doing it ‘his way.’(4)

In addition to France, Kondos has continued to paint in Sacramento and in the Monterey Peninsula city of Pacific Grove, where he established a home and studio in 1990. He also continued to explore new subjects in Greece. He made many Greek paintings in 2006, when he led a painting workshop there. The excursion included a special preview of his show at the cultural center in Litochoro, a town located at the base of Mount Olympus. For him, it was an endorsement of his heritage and a literal pinnacle of his career. Drawings and paintings made in preparation for the show and during the trip included Greek hillsides, vineyards, religious edifices, and scenes of the coast. One during painting features a vertical stretch of beach at Kalamata, which is rendered as a broad white arc dividing the landscape from the bottom edge of the canvas to a narrow band of sky at the top.

In April 2013, Kondos will celebrate his 90th birthday, and he is still painting. He has often said that he hopes to be remembered as a “recorder on the journey through life," a journey that to date has been extensively chronicled through paintings of California, the desert Southwest, France, and Greece.(5)  Views of China, a subject of recent interest, may offer yet another chapter.  For Kondos, these works record his experiences and his moment in time, simultaneously connecting him to future generations.  And yet, it is not for his wide array of subjects that his work will be remembered.  It will be for his distinctive way of seeing and for his ability to set his perceptions down on canvas.  "No matter what I paint," he ruminates, "people can say 'that's a Kondos,' even from a distance, and that feels good."(6)

The exhibition A Touch of Blue: Landscape Paintings by Gregory Kondos is on view at the Crocker Art Museum in Sacramento, California, from February 24 to May 19, 2013.

(4) Gregory Kondos, quoted in video by Paul Bockhorst, writer and editor, Gregory Kondos: A Passion for the Land (Produced by Ray Tatar for the Corporation for Cultural Broadcasting in Association with KTEH-TV/San Jose Public Television, 1997.)