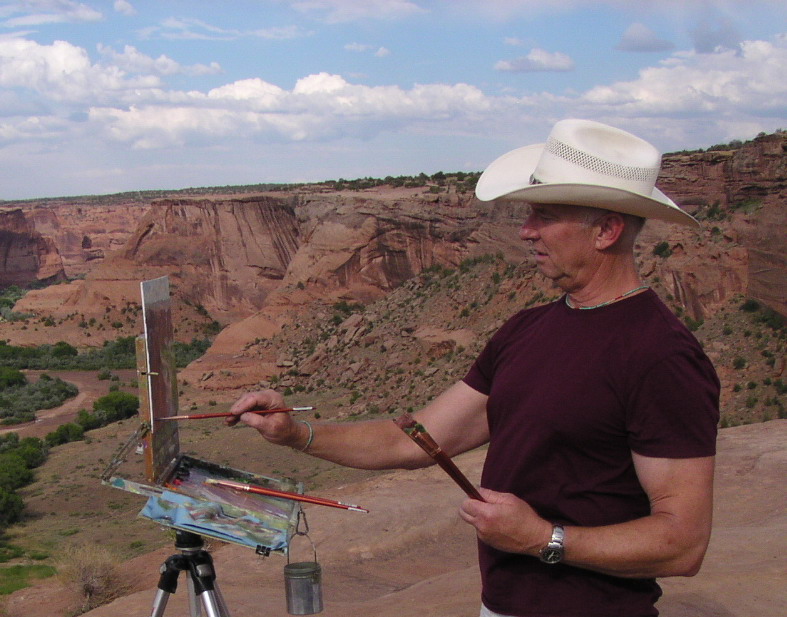 A glance around Gregory Hull's studio in Sedona, AZ, tips you off: The artist is an eclectic. Colorful earthenware pottery from Italy and Spain hangs on the wall near a sun-bleached cow skull. A stuffed rooster, quail, and several ducks stare glassy-eyed across a room filled with antique dinnerware, rustic furniture, and woven rugs. Sheets of classical music sit open on a grand piano--along with the tunes of Gershwin and Joplin.

The studio testifies to Hull's inquisitive nature and wide-ranging interests. The same traits are evident in the painter's work, which covers most of his studio walls. His oil paintings represent an unusually diverse repertoire that ranges from landscapes to still lifes, nudes, and, occasionally, portraits. When painting outside in the Southwest, Hull carries on the plein-air tradition of the California Impressionist School by infusing his canvases with bright sunlight, emotion, and gestural brush strokes. When working in the studio, he reverts to a more polished, classical European style in his subdued renderings of still lifes and nude figures. Altogether the canvases are so different from one another in mood and subject matter that viewers might mistake them for the work of several different artists. 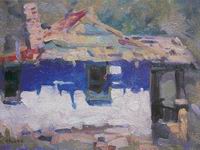 "I'm eclectic. So is my work," Hull says. It's a simple explanation for the parallel between his personality and his art that, to him, seems natural. Upon close examination, however, it becomes apparent that eclecticism plays a vital role in what Hull calls the lifetime learning process of painting. For him, the yin and yang of exploring different directions helps him maintain a sense of balance, an equilibrium, as an artist. It also provides a means of generating and developing new artistic ideals.

Ever since childhood, when his parents taught him the importance of being well-rounded, Hull has pursued an array of interests. He studied languages and became fluent in Spanish; he studied music and became accomplished on the piano and other instruments; and he developed a passion for collectables, which led to an enjoyable side business as an antique dealer. His interests find their way into his work: He makes use of his favorite collectables sitting around the studio--a metal pitcher, a crystal goblet, antique plates--as novel subjects for still lifes. 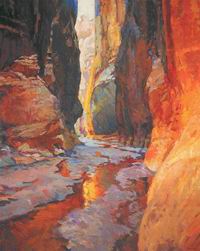 Hull is classically trained in art, having studied under English portraitist Alvin Gittins while earning both bachelor's and master's degrees in fine arts at the University of Utah, Salt Lake City. Gittins imparted an academic approach to drawing and painting from life and emphasized the study of human anatomy.

Hull enhanced his training in classical figure and still-life painting by observing the works of Old World masters in major museums throughout Europe and studying painting in Madrid, Spain, for a year. He developed a lasting affinity and admiration for the works of Vermeer, Rembrandt, Velázquez, Sargent, and Whistler. During the same period, Hull became interested in plein-air painting, and he frequently ventured out of the studio to indulge his fascination with Utah's bright light. This interest turned into passion when he was exposed to California Impressionism after moving to Los Angeles in the late 1970s.

Throughout the years Hull has kept a foot firmly planted in both worlds, indoors and out. The contemplative, deliberate nature of his studio work provides a counterbalance to the passion and spontaneity of his outdoor painting.

During the weeks when Hull is holed up in his studio, the urge to get away tends to build up. He takes off in his truck and camper at least once a month, leaving the everyday distractions of telephone and television behind. He wanders along highways and side roads, letting the artistic muse guide him to places with such irresistible combinations of composition, color, and light that he's compelled to slam on the brakes and pull off the road. 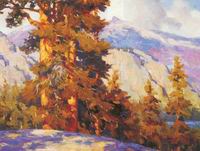 On these trips Hull paints like a man obsessed, sometimes turning out as many as four mid-size canvases a day. He works quickly, attempting to capture the nuances of fleeting light and shadow. Typical outdoor distractions--stinging insects, chatting people, and gusts of wind that can carry a canvas away--don't slow him down.

"Outdoor work is passionate," he says. "You psych yourself up so much that this energy bursts out onto canvas--you have to work fast. I probably couldn't do that every day, but since I save up the energy, the inspiration, when I get out there my hands are trembling to get started. When I'm out on a day like that, I am completely happy. I'm communicating with nature and having a great time. It's not a struggle to paint; it just flows out. There are those moments when everything is going great and you feel it. I think you're striving for that feeling all the time."

Hull's subjects have included the canyonlands on the border of Utah and Arizona, the California coast and mountains, the massive organ-pipe cactuses in the southern Arizonan desert, and the evidence of mankind on such landscapes in the form of rustic cabins and Spanish missions. He usually completes his landscapes on site, but he often takes photographs for reference and sometimes makes a few changes in paintings back in the studio. 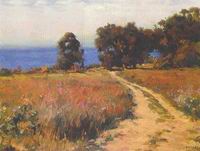 Hull is most captivated by the pattern of light and shadow that give a scene its appearance of dimension; light is the primary ingredient in all of his work, whether landscapes, still lifes, or nudes. A recent landscape, Coastal Path, depicts sunlight dappling the purple shadows of a sandy footpath at the ocean shore in Carpinteria, CA, one of the artist's favorite painting steps. Despite the obvious attractions of wave lapping at the beach, trees jutting into the blue sky, and violet mountains rising in the distance, the light and shadow dappling the narrow path commend attention. The palette in Coastal Path consists of subtle ranges of color typical of Hull's paintings. 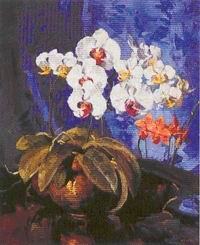 Similarly fine modulations of color can be seen in many of Hull's studio pieces. A recent example is his Still Life with Grapes, which captures the subtle interplay of the glints of hammered metal juxtaposed with the waxy skins of purple grapes and their reflection on a polished table. Typically when Hull makes discoveries in one area, he introduces them to other facets of his work. He has found inspiration in objects, such as Navajo rugs with their soft-edged woven fibers and subtle tones, that pervades even his landscape painting. Conversely, he is striving to introduce some of the spontaneity and spirited brushwork of outdoor painting into his studio works, aiming to give them an expressiveness that transcends the inanimate subject matter.