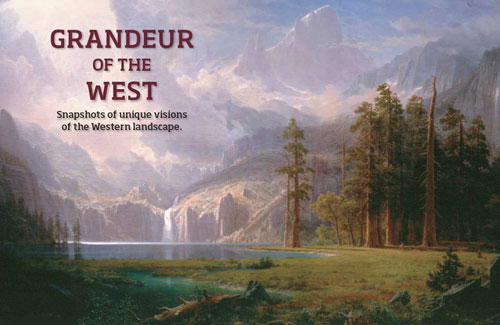 In the 1790s, Thomas Jefferson convinced the American Philosophical Society to send Andre Michaux on an expedition to "explore the country along the Missouri, & thence Westwardly to the Pacific Ocean." Michaux was Royal Botanist to Louis XVI who had sent him to North America to look for plants that would be of benefit in France.

Jefferson welcomed the French expedition and met Michaux in Philadelphia. The charge to Michaux was:

You will, in the course of your journey, take notice of the country you pass through, its general face, soil, rivers, mountains, its productions animal, vegetable & mineral so far as they be may be new to us & may also be useful or very curious;...the names, numbers & dwellings of the inhabitants, and such particularities as you can learn of their history, connection with each other, languages, manners, state of society & of the arts & commerce among them.

Michaux failed in his mission, however, and his charge became the basis for the 1804-1806 Lewis and Clark Expedition, which reached the Pacific and returned with maps, specimens and journals.

In 1871, an expedition to explore Yellowstone included the photographer William Henry Jackson and the painter Thomas Moran. The expedition leader, V.F. Hayden, made a report to Congress, and armed with Jackson's and Moran's images; convinced the legislators to remove the territory from public auction. The next year, President Ulysses S. Grant signed an Act of Dedication that made Yellowstone the first of nearly 400 national parks.

Explorers and artists flocked to the West and the tradition of the Western landscape was born. German-American painter Albert Bierstadt was a member of the Hudson River School, a group of painters who were influenced by Romanticism. Their paintings express the strength of the primeval American landscape. Bierstadt's majestic Mount Whitney (nearly 7 by 10 feet) was painted in 1877. Mount Whitney is over 14,000 feet high and is the highest point in the "Lower 48." On a clear day it can be seen from Death Valley, which is below sea level. In the painting, the mountain pierces the clouds, as does the sun, and the foreground landscape shimmers in the light. A dead tree in the foreground is a favorite motif of the Hudson River painters, suggesting that life is fragile- only nature and the divine are eternal. 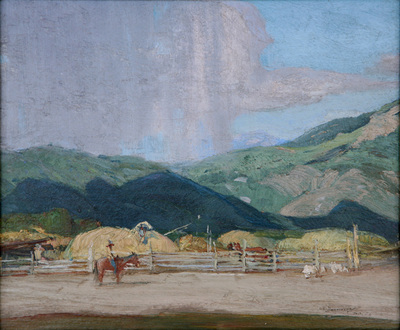 Poets and writers have also responded to the Western landscape. Often they respond to the vast sky over the vast landscape. In her novel, "Death Comes for the Archbishop," set in New Mexico, Willa Cather wrote:

"The sky was as full of motion and change as the desert beneath it was monotonous and still, - and there was so much sky, more than at sea, more than anywhere else in the world. The plain was there, under one's feet, but what one saw when one looked about was that brilliant blue world of stinging air and moving cloud. Even the mountains were mere ant-hills under it. Elsewhere the sky is the roof of the world; but here the earth was the floor of the sky. The landscape one longed for when one was away, the thing all about one, the world one actually lived in, was the sky, the sky!" 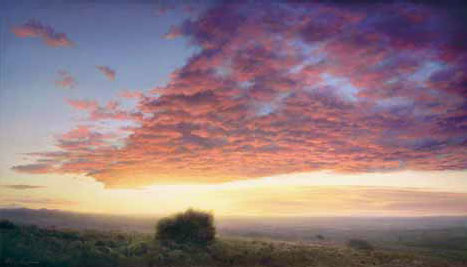 Over 100 years after Bierstadt painted his response to Nature in the West, Peter Nisbet is inspired by its changing and dramatic skies. His Red Dawn is reminiscent of luminist painters of the 19th century who observed and painted the effects of light in the landscape. It is a scene of primordial nature at her best. Nisbet writes, "When I imagine the story of my own life, I see only this: a vast chromatic distance, a layered, transparent landscape and a journey without a destination through great vaults of stone, light, and space."

The painters of the Taos Society of Artists also responded to the clear light of the high desert of northern New Mexico. Oscar E. Berninghaus was a founding member of the Society and lived in Taos for over 25 years. The Taos painters often chose the domestic landscapes of the ancient Pueblos and the farms of settlers along the Rio Grande as their subjects. Berninghaus, however, was concerned with painting, not mere representation.

"The Painter must first see his picture as paint-as color-as form-and not as a landscape or a figure. He must see with his inner eye then paint with feeling, not with seeing."

Scott Christensen's Fading toward Red is a bucolic scene in Idaho in which the setting sun has begun to change the color of the landscape. The landscape has been tamed and cattle eat its grasses. As a plein air painter, Christensen asserts, "The importance of study outdoors.... is essential. Artists often think they need to begin and finish a painting on location. In fact, if they could expend all of their faculties and energy toward learning to understand the key elements of the scene, they would grow more quickly as a painter."

The different approaches of Berninghaus and Christensen to experiencing and recording the landscape are echoes in the work of Josh Elliott. Elliott's Big Sky January painting is a more deliberate response to the harsh landscape of the winter in Montana. The cattle farmers have domesticated part of the landscape for grazing and have protected their house with Cottonwood trees - and all lies under the Big Sky of Montana. 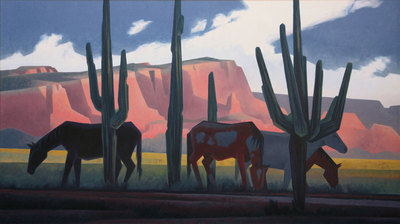