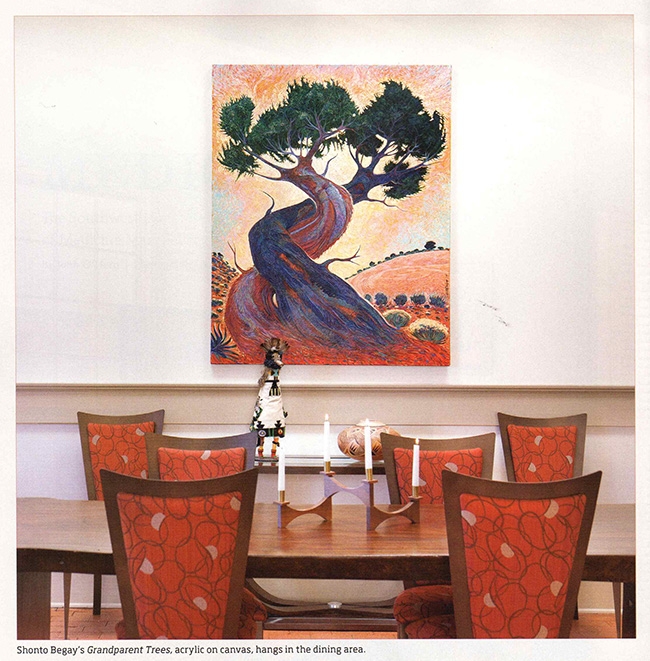 Agnes C. Sims (1910-1990), like many people, visited Santa Fe, was enchanted and immediately moved here. She had attended the Pennsylvania Academy of the Fine Arts and, after arriving in Santa Fe, became a building contractor, buying and restoring historic buildings. She acquired a property on Canyon Road and set about building a compound. Until recently, the compound (much expanded) was the Santa Fe home of Mark and Kathleen Sublette. For several months of the year it was the Santa Fe home of Medicine Man Gallery, whose main home is in Tucson, Arizona. Mark is a physician, expert on the arts of the Southwest and a novelist. His novel The Butterfly Twins: A Charles Bloom Murder Mystery is based on the home on Canyon Road. Among the paintings in the collection are several by Sims. She had discovered the ancient petroglyphs in the nearby Galisteo Basin, which served as inspiration for her own symbolic paintings and drawings.

Mark grew up in New Mexico. ”I’ve attended Indian Market since I was a kid,” he says. “PuebIo pottery was my first love since I was exposed to it before I was 7. I liked its tactileness and its three-dimensionality." His interest, collection and knowledge grew and, in 1992, he opened Medicine Man Gallery in Tucson, running the gamut of Southwest art. He had been collecting for about 10 years and realized he had built an inventory. “I consider myself a collector,” he says. “You start with a base of whatever you're collecting and through education you learn more and your eye develops. You realize a piece may not be the best example and you get rid of it and get something better. I found that upgrading came naturally to me and I realized I could probably make a living buying and selling art.” He also discovered Maynard Dixon (1875-1946). “When I moved to Tucson, I was introduced the Dixon’s work early on. I found his renderings of Arizona spot on. They were strong graphically and his ability to draw was the best I'd ever scene. When he included Native work in his paintings, it was the right beadwork, setting, pottery and the paintings weren't sugar coated. The more I read his story the more I was hooked,” he continues. “I realized I wanted to collect as a real collector. If I got enough stuff I could make a more comprehensive collection and could share it.” I had a retrospective show for Dixon in 1996 and got to know his son John who helped solidify my understanding of his father. He and Don Hagerty, who wrote The Art of Maynard Dixon, became mentors.” Mark later created the Maynard Dixon Museum at his Tucson gallery. 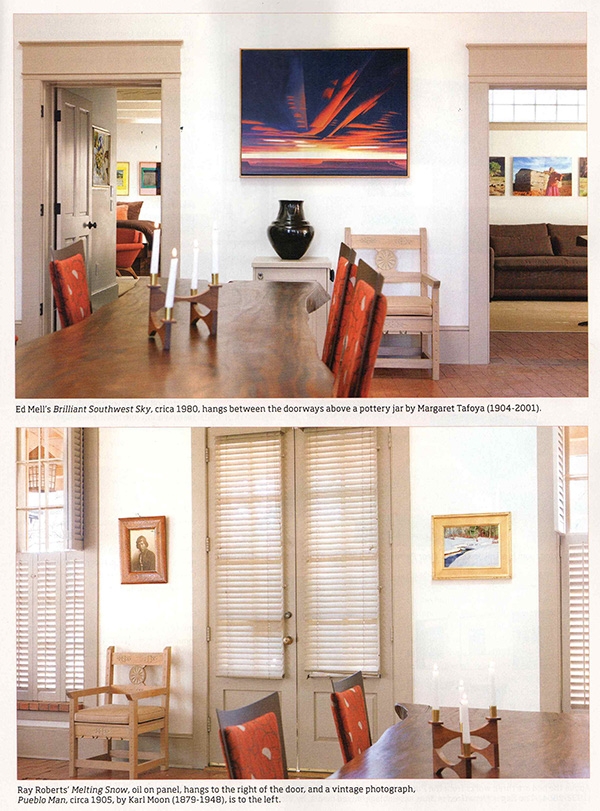 When he started out, research was done the old-fashioned way, by reading books. “Acquiring knowledge has evolved from when I started out. Its immensely easier today. When I started off I read vociferously. In addition to searching the internet, I encourage collectors to go and visit different dealers and museums. Museums can clarify what's good, how its dated and provide a chronology. Dealers help in establishing price structures. Gaining that knowledge empowers clients.”

He has put up a series of YouTube videos - “Educational three to four minute videos on different aspects of what I know, how I've gotten where I am.” He also writes about various aspects of his collecting and mounts educational exhibitions at the gallery. Commenting on the need for expert advice and accurate information, he says, “You have to have knowledge to quantify and qualify the art. Some Dixons, for instance, have issues that affect their pricing. Some are damaged, some aren't signed, some aren’t Dixons. On our website we have multiple images of a piece and list the price. Transparency is important in our business.”

Medicine Man Gallery also shows contemporary art. “That came in early on," he explains. ’’I sought the top Western artists of our day and did a show around that. I started looking for people who I thought had an original voice. I’m careful about who to add. It’s not about numbers. The main criterion is ‘Would I put this in my house?’ I wouldn’t be doing my job right if I were just selling art to make money. It's important as a dealer to make sure you love the art you're selling.

“I advise clients to collect what they love, to buy what excites them,” he continues. “Also, don’t be afraid to pay top dollar. Great pieces don't come around that often. If you don't purchase beyond the level you’re comfortable with, you end up regretting it. Force yourself to figure out a way to get it. The piece will always appreciate and you have the joy of living with it.”

Medicine Man Gallery is currently showing an exhibition, Homage to the Square, juxtaposing the works of contemporary minimalist painters from the 1950s-80s with Navajo rugs and blankets from the 1870s-1940s. Works by Jorge Fick (1932-2004) can be seen in the Sublette’s home. “He studied at Black Mountain College when Josef Albers was there and he was friends with John Chamberlain and Franz Kline,” Mark explains. "He also lived in Santa Fe.” The exhibition will include pieces from Fick’s Pueblo Window Series that correlate with the squares and polygons of the textiles. It continues through October 28.

The Sublette’s collection, as well the breadth of material shown in their gallery, blend contemporary and historic art across cultures.