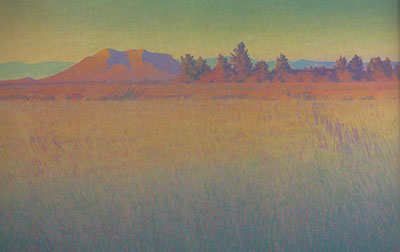 Most people go through their entire lifetimes without once asking themselves, "What does air look like?" But not a day goes by that Arizona-based landscape painter Glenn Renell doesn't ask himself that very question. And on many days he asks it more than once. "When you're painting the landscape," says Renell, "you're not painting things, you're painting air." 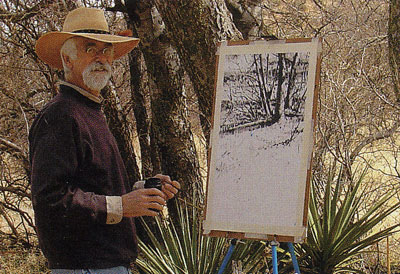 For landscape painters, the atmosphere affects color, texture, depth and everything that light falls upon. To Renell, air is key to his distinctive style and aesthetic. In his painting Sulphur Springs Track, for example, a low mountain sits at the horizon and a field fills two-thirds of the image. In truth, there's not a lot in this painting but air. Yet, as the painting shows, the essential beauty of a landscape often lies not in topographical detail but in the atmosphere. The subtle gradations of color within this cast stretch of empty land and sky make a palpably emotional statement.

Renell finds the scenery near his home in Pearce, AZ, east of Tucson, ideal for his style of painting. He and his wife, Gail, moved to the Southwest from New England six years ago. "At first I didn't see anything that was really grist for painting," says the artist. "Then I started to see things differently. I found less dramatic things more engaging. As I painted, I started to make the subtle colors more important by narrowing contrast and seeking equilibrium "complexion," gives his work both a modernist look and a vintage, tinted feel.

"I spend two or three days on a painting," he explains. "On the first day, I spend about 40 minutes just looking at the landscape and mixing colors, using a palette knife to keep the colors fresh. Then I block in the distribution of the notes of color. On the second day, the forms become clearer. I need to achieve precisions of color, so I can't fix a painting too much or it gets muddy. I end up rejecting a lot of the paintings I start. I operate on a 30 percent success rate."

Renell unusually paints small oil of the same scene in different light and weather conditions. "I generally work in series," says the artist. "I find something that interests me, and while at first I may not know why it interests me, I learn why by painting." His most recent work is just such a series, this one of Cochise Stronghold, the hideout in southeastern Arizona's Dragoon Mountains where the famed Indian chief Cochise eluded the U.S. Cavalry. "It's a natural fortress," says Renell. "There's something about 18th- and early 19th-century landscapes that interest me. It's the sense that the landscape is not all benevolent. 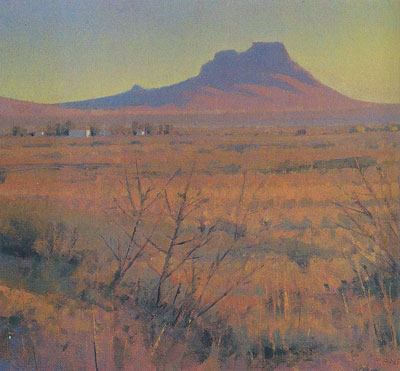 "With Cochise Stronghold, I'm trying to deal with the rocks. They're very difficult to paint. They're an anomaly, because they were formed about a half mile below the earth's surface, then pushed up slowly over time and worn down by erosion. They have an oddly soft look to them. I'm painting the east side later in the day, with the sun behind it and reflected light coming up from the valley. The painting is about a period of time rather than a specific time. The 'context' is the experience of being there on several visits."

His sensitivity to the quieter messages of the Arizona landscape, and his approach to expressing himself visually, are very much a function of having come to the Southwest after decades in other, quite different environments.

Renell was born in Maine in 1947. His father's work took the family to Massachusetts and various places in New York, landing them in an arty community on Long Island during Renell's high school years. "I was never a good student," he recalls, "but I could always draw well, and I did a lot of watercolors from sixth grade on." His parents encouraged his obvious talent, though no one else in the immediate family had artistic inclinations (except, he says, for a great-grandmother who was "a very good painter in an Edvard Munch-meets-New England sort of way").

"I didn't ever think I was going to be an artist, but I became increasingly involved with art," notes Renell. He started college at the Rhode Island School of Design right after high school but quit in the spring. "I learned a lot," he says, "but I wasn't mature enough to be in art school. I was slow to grow up. I wasn't willing to do the work."

The year being 1966, it took some guts to leave school, because he was soon compelled to join the Navy for four years to avoid being drafted. He spent a good part of his active duty on the flight deck of an aircraft carrier in Vietnam, where, he says, "you learn to be very responsible." After leaving the Navy, he took advantage of the G.I. Bill and went back to college, this time in North Carolina, where his family now lived and where he met Gail, his wife. 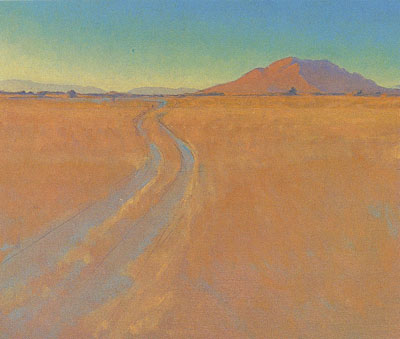 He and Gail lived briefly in Arizona and then San Diego before landing in Spokane, WA. Renell had a productive two years at Fort Wright College, focusing on painting and beginning to find direction. "In the Navy I'd read a lot of books by Ayn rand," he says, "so I came in to the left-wing world of academia in the early 1970s as a sort of right-wing guy. Being at odds that way was a great thing to happen, because it encouraged me to do away with subject matter and just learn how to paint by talking about color and value. I was able to let go of my ego, and I became involved with abstraction quite naturally that way." Renell was drawn to the abstract expressionists and to minimalism, though other "isms" failed to move him. "Pop art left me cold then, and it leaves me cold now," he says.

With no prospects in Spokane, Renell left for Maine in 1975, moving into his grandmother's summer farmhouse west of Portland. The young couple survived the winter in the unheated, poorly insulate house by sleeping under quilts on a single cot in the kitchen near the fireplace. "The thermometer on the mantle said 95 degrees, but the dog's water dish a foot away froze over," he remembers. They relocated to Massachusetts for several years while Renell earned his master's of fine arts at the University of Massachusetts-Amherst, then they returned to Maine and the farmhouse, which they eventually restored. Renell began his teaching career at the Maine College of Art, where he taught full time for close to 20 years.

Early in this period he began to feel that his work - which included variations on gestural abstraction done in acrylic and sometimes collage - no longer satisfied him. "A lot of people came to the realization that abstract painting was empty, that you had to bring some reference to the world back in," he says. "When I finally realized that, I knew I had to do something else." Renell shifted his focus to landscape painting. "It has always been a luxury for me to paint what I wanted without worrying too much if it would sell," he says, referring to his income from teaching and Gail's income as a nurse.

The influences on his work came from several directions. Back in art school he had taken not of Fairfield Porter, one of the few representational painters who never lost cachet with the New York art world. "Porter bridged everything," says Renell. "He was quirky and showed how you could choose subject matter and make evocative, almost romantic paintings of everyday things." Jasper Johns was another influence. "I really related to him," says Renell. "I was interested in his notion of making paintings not just pictures of things but 'things' themselves. The craftsmanship of the object was important." And there were the great American landscape artists who consider. George Inness, the sublime tonalist, was foremost among them in Renell's vision.

By the 1990s Renell was ready for new input and a change of scenery. "In 1991 I took a leave of absence and spent the winter in Tucson," he says. "I wanted to spend more time in the West for the sake of contrast, and I liked being able to paint outdoors most of the year." For the next decade he spent a part of each year in Arizona, finally moving there permanently in 2001. And although Renell still returns to the leafy landscape of Maine from time to time, he is more than content to paint the "less dramatic" subject matter of the Southwest.

When not on location in places such as Cochise Stronghold, Renell paints in his 20-by 24-square-foot studio, located just 60 feet from his house. Three or four times a day, he goes on a big loop around his 10 acres with his dog Dixie. "I have an idyllic life for a painter," he says. His paintings sell well, and while he says he learned a great deal from teaching, he has chosen not to teach since moving to Arizona. Instead, he spends his days pondering other matters, such as "What does the air look like today?"