In a rugged mountain range of southeastern Arizona lies a canyon lined with cottonwood and willow trees, abundant in game and fish. There, 150 years ago, lived a band of Apache Indians known as the Aravaipa. Led by an elder named Eskiminzin, they had maintained peace with the American farmers and miners who were pouring into the Arizona Territory after the Civil War. The federal government declared them prisoners of war all the same, though they were allowed to remain in the canyon.

The citizens of Tucson, the largest town in the region, had been battling Apaches of all kinds for decades. When the regional military commandant made it clear that the Aravaipas would be living nearby under federal protection, civic leaders gathered a force of Tohono O'odham Indians, Mexicans and Anglos. At dawn on April 30, 1871, the company attacked, and in moments 144 Aravaipas lay dead - most of them women and children. This would be known as the Camp Grant Massacre.

President Ulysses S. Grant demanded that the ringleaders of the massacre be brought to justice. A Tucson jury deliberated for precisely 19 minutes before acquitting them. In the aftermath, supposedly for their protection, the War Department directed that all Apaches be confined to a single reservation. For the next six years, the army chased Apaches from their highland camps and drove them to the San Carlos reservation, a dusty flat along the Gila River, which the soldiers dubbed Hell's Forty Acres. A thousand Apaches died in the process. Six thousand or so were finally rounded up.

Goyahkla, "The One Who Yawns"

One of them was called Goyahkla, "The One Who Yawns," better known by the name Mexican soldiers had given him: Geronimo, after the Catholic saint Hieronymus. He was born at a place he called No-doyohn Canyon, near the present-day town of Clifton, Arizona, just west of the New Mexico line. He placed his birthday in 1829, though most historians put it six years earlier, in 1823. Whatever the case, following Apace custom, Geronimo considered his birthplace his true homeland, and though he would roam far and wide, he would often return to it, fleeing pursuers, to roll on the ground and cloak himself in ancestral dirt for protection.

Geronimo was a Bedonkohe, a member of a small band of the Chiricahua Apaches that lived in the northern Peloncillo Mountains at the foot of the tall Mogollon Rim. As a young boy, he learned to farm crops of corn, beans, squash and peppers in that fertile, well-watered country. But, early on, his fellow Bedonkohes recognized that he had a gift for seeing into the future in order to interpret the present, and he was trained as a shaman, learning songs such as this one to guide him between the spirit world and the ordinary one: 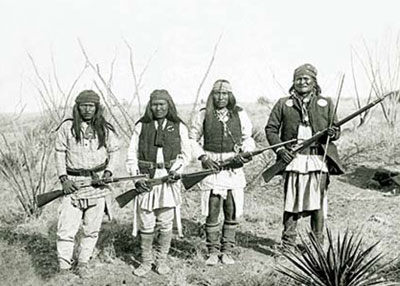 Though a holy man, skilled in medicine and prophecy, Geronimo had been an unforgiving warrior since his early manhood, after Mexican soldiers came into the high country and murdered his mother, his wife and three of his children. After that, he took matters into his own hands; as he recorded in his autobiography, he had learned as a child that Usen, the chief Apache deity, "does not care for the petty quarrels of men," and that it was up to the injured party to exact retribution.

So he did. For two decades, he traveled with small bands of Bedonkohes into Mexico, raiding farms and laying siege to small towns, stealing cattle and horses, occasionally killing the enemy. Wounded many times in battle, Geronimo taught his fellow warriors that tactics of invisibility, slipping away into rocky canyons and mountains when pursued, striking quickly and from a long distance.

Geronimo paid little attention to the Anglos who came into Apache territory at first. They were, after all, an enemy of Mexico, too. But soon it was not Mexican soldiers but American ones who came into the Peloncillos and the Mogollon Rim country. They killed Apache leaders such as Mangas Coloradas. They killed ordinary Apaches, too. After that, Geronimo said, "All of the Indians agreed not to be friendly with the white men anymore."

The Chiricahua elder Cochise led his people into war (see Jan/Feb. 2006 issue). When he died in 1874, his son Naiche emerged as an Apache leader. So, too, did Geronimo, who supplanted Naiche  - because said the Anglo newspapers, Geronimo surpassed all other Apaches in "cruelty and cunning." More likely he was simply a better leader. In all events, Geronimo led the band from the United Stated to Mexico and back again, depending on which side was safer at the time. He fought the armies of both countries for a few years. Finally, in 1877, he went to the San Carlos reservation.

Geronimo submitted to the demand that he wear brass dog tags and present himself at daily roll call. But in time, fed wormy hardtack and rancid beef, unable to farm in the salty bottomlands, lied to by one government agent after another, Geronimo left the reservation with a handful of warriors, as he would do many times in the coming years. He returned to San Carlos after Mexican soldiers killed his ally, the Warm Springs Apache war leader Victorio, living for a few months at a place on the reservation that now bears his name (the town of Geronimo on U.S. 70).

Then again, he left the reservation. As usual, he and his followers disappeared as if by magic. To this day, historians have not been able to reconstruct with certainty the paths they followed, but this time they were not seen until they were well into the Sierra Madre of Mexico, from which Geronimo conducted a brilliant guerilla campaign.

In March 1886, after having been pursued relentlessly by a quarter of the U.S. Army, Geronimo again surrendered, to Gen. George Crook, who led the pursuit. By this time his band - numbering about 35 warriors and 100 women - had split apart. Many of the Apaches remained in the Sierra Madre, where loggers would find their campfires and arrowheads well into the 1940s, when the last of the free Chiricahuas simply disappeared. Geronimo had a simple demand on behalf of those who stayed with him: if he surrendered, he said, then he would submit to imprisonment for a couple of years, as long as his people were allowed to return to Arizona. 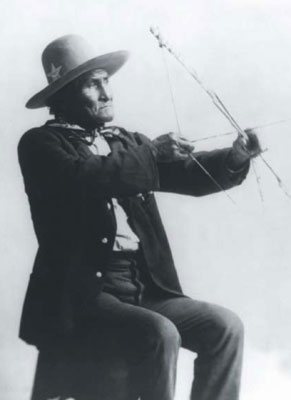 President Grover Cleveland refused Geronimo's terms. Instead, the Chiricahuas were shipped off to Fort Marion, Florida, an island prison where the Aravaipas who had survived the Camp Grant Massacre were also interned. But Geronimo was not with them; with Naiche and a few others, he had escaped to Mexico once again. The noose tightened, with Mexican soldiers in pursuit on one side, Americans on the other. In a few months, on Sept. 3, 1886, at a rugged place called Skeleton Canyon, Arizona, Geronimo made his final surrender - this time to Gen. Nelson Miles, for Crook had been relieved from command, perhaps for letting Geronimo out of his sights, perhaps because he had publicly voiced sympathy for the Apaches.

Geronimo would never see his native land again, even though Miles promised him that on signing the peace treaty, "Your past deeds shall be wiped out...and you will start a new life." He was imprisoned separately from the other Apaches in a fort in northwestern Florida and put to hard labor for nearly eight years.

Then in 1894, along with some 340 other Apache prisoners, he was sent to Fort Sill, Oklahoma, where he farmed and posed for tourist photographs, sitting at the steering wheel of a Cadillac sedan bedecked in a top hat of a Plains Indian headdress. He made an appearance in St. Louis honoring the centennial of the Louisiana Purchase, selling bows and arrows and signing autograph books. He related his life story to a white biographer. He traveled to Washington to appear in President Theodore Roosevelt's inaugural parade in 1905, and he submitted a request to the country's new leader: "Arizona is my land, my home, my father's land, to which I now ask to be allowed to return. I want to spend my last days there, and be buried among the mountains. If this could be I might die in peace, feeling that my people, placed in their native homes, would increase in numbers, rather than diminish as at present, and that our name would not become extinct." Roosevelt, it seems, did not reply.

When death came to Geronimo on Feb. 17, 1909, it must have been a relief. And for a time, it appeared as if the Apaches would die with him. For the next decades, the residents of San Carlos raised hay and barley for the horses of the government that confined them, and they continued to die, now the victims of disease like malaria and typhus and especially of hunger - for as Crook's fellow officer John Gregory Bourke thoughtfully remarked, "Our government had never been able to starve any of them until it had them placed on a reservation."

Other Chiricahuas eventually ended up on the Mescalero Apache reservation in New Mexico, and the Chiricahua no longer exist as a separate Apache band. Neither do the Aravaipa. But the Apaches as a whole survived, against terrible odds. Long forgotten, Geronimo reemerged in history in World War II, when American paratroopers shouted his name while jumping into battle. Their cry made a fitting tribute to a great warrior - one who, it seems, would rather have been tending his garden in his native mountains than battling his way through a long and storied life.