In his book Letters and Notes on the Customs and Manners of the North American Indians published in 1841, George Catlin (1796-1872) wrote, to “record justly and correctly the character and customs of a people, [one] must go and live among them.” He travelled west five times in the 1830s, observing, sketching, painting and collecting artifacts. He was the first artist who painted portraits as well as the life and pastimes of Native peoples as their sovereignty began to be reduced. 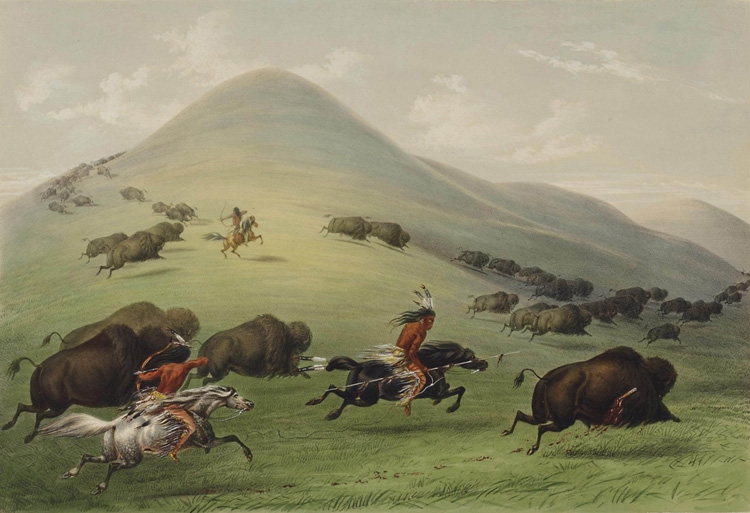 In 1838 Henry Clay, former secretary of state and a United States senator, wrote a letter of introduction for Catlin. He declared, “Mr. George Catlin… has been engaged many years among the various Indian tribe who inhabit this continent, and collected a mass of valuable information… surpassing that which was probably ever possessed by any man, or what is to be found in any books.” In 1844 Catlin published the first of what was to have been a series of portfolios of lithographs based on his sketches, drawings, and paintings. In Calin’s North American Indian Portfolio, he wrote of his subjects as a “truly lofty and noble race… A numerous nation of human beings … three-fourths of whose country has fallen into the possession of civilized man … twelve million of whose bodies have fattened the soil in the meantime; who have fallen victims to whiskey, the small-pox, and the bayonet.” Even today Catlin is depicted both as a supporter of Native peoples and as an exploiter of them. Nevertheless, his images created from careful observation while living among them, are beautiful and invaluable records. The copy of Buffalo Hunt pictured here is from the hand-colored first edition of his portfolio.

Today, painters of the Old West don't have the luxury the direct experience of the 19th century but have access to artifacts, images and stories of those who did.

John Moyers is the son of the renowned Western painter William Moyers and grew up in Albuquerque, New Mexico, surrounded by art. Moyers says, ’’When I paint, I have to be as accurate as I can be... It’s all about being authentic.” He works with original artifacts that help him bring paintings such as Blackfeet Man with Henry Rifle to life. The Henry rifle, introduced in 1860, held multiple rounds. It was used by some Union soldiers and, with devastating results, by Lakota and Cheyenne warriors against the forces of General Custer in 1876.