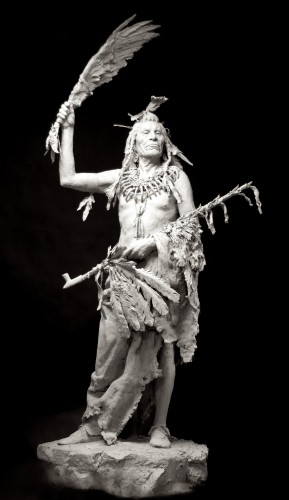 In a heartwarming ceremony this past year honoring the late George Catlin, John Coleman's bronze Greeter was unveiled at Green-Wood Cemetery in New.York. Friends, family and collectors gathered in an intimate setting at the national historic landmark where George Catlin was buried to pay homage to his life work and contribution to Western art.

Catlin, who journeyed West in the footsteps of Lewis and Clark, sought to capture on canvas images of Native peoples during a crucial time in American history when the country was first settled. Coleman's Greeter, a life-size bronze work will now appear at Catlin's resting site, as part of a generous donation to the cemetery in honor of Catlin's work. "I started collecting Coleman in 1994 when he just got started," says collector Howard Alper, who was present at the unveiling, "and I made an agreement with him to acquire the number one strike of each edition and so that's what we have."

The ceremony was replete with warm remarks and Native songs while onlookers took in the beauty of the rolling hills and pristine grounds of Green-Wood. Also present at the ceremony was Sue Coleman, daughter and granddaughter, and many others. "It was very, very touching and I was happy that this man had finally found some peace and was happy and that something so beautiful was on top of his grave," says Frankie Alper about Catlin. "He was just really special. It was so gracious of John to do this for the cemetery. I thought it was wonderful."