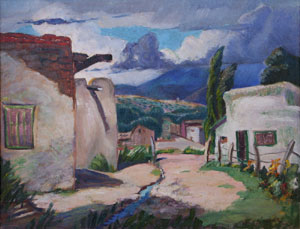 Frank J. Vavra was born in St. Paul, Nebraska in 1892. When he was seven, his parents moved with their three boys to Cheyenne, Wyoming. The wild and rowdy atmosphere of this pioneer town continued to influence Vavra's paintings long after he left there. Franks' parents were fond of the arts and encouraged their son's interest in painting. They were from Prague, Czechoslovakia where Frank's maternal grandfather had been a landscape gardener to Franz Josef, Emperor of Austria-Hungary.

Cheyenne didn't offer much in terms of art instruction, so Vavra taught himself how to paint. His experiments at making his own paints failed badly, but they became encouragement to study with a professional artist. Upon graduating from high school in 1917, Frank had little time to ponder his career direction as World War I started and he enlisted. Less than a year into his military service, he was seriously wounded and was gassed in the Argonne Forest of France and then sent to a hospital in Vichy, France to recover. In an unexpected twist of fate, Vavra met a student of Claude Monet's there named Pillan. For the next year of his arduous recovery, the two became friends and Pillan answered many of the beginning painter's questions. By the time Vavra was released to go home, he not only had a keen appreciation for making the remainder of his life worthwhile, but was resolved to make the formal study of art his priority.

He enrolled in the Denver Art Academy where for three years he studied with John E. Thompson, Robert Graham, Professor Rennell and Henry Carter of the Philadelphia Academy of Fine Arts. While at the Academy he met and married Kathleen Huffman, who was an accomplished artist in her own right. She was employed as a fashion artist at the Denver Dry Goods Company. The next few years were spent with Frank living off a small Army pension while trying to establish himself in the art world.

By 1929, Frank had a modest following and was selling his paintings, but grew restless with city life. His desire to live closer to nature and the need for introspection prompted his purchase of a building in Insmont, near Bailey, Colorado. He remodeled this humble building into an artistic studio-home which Frank, Kathleen and their new daughter moved into in 1930. During the years up until 1942, Frank learned to paint the peaceful and beautiful scenes of nature he experienced all around his mountain home. While living in Insmont, the Vavra's had two more children. With the threat of another war and a child that needed specialized medical attention, the couple moved back to Denver in 1942.

Beginning with realistic work and looking at the non-objective work completed later in his life, Vavra was mostly remembered for his impressionistic landscapes of the Southwest. For the last year of his life, Frank painted murals for the Olinger Decorating Company as he continued to paint and teach others from his Denver studio. He died in 1967 at the age of 75.