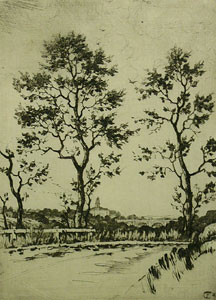 Chamberlain was born in San Francisco, but moved to the family farm near Ascutney, Vermont at age seven, and then to Hartford, Connecticut by age fifteen.  As a teenager, he took drawing lessons from Dwight Tryon at the Wadsworth Atheneum.  His first job was making technical drawings and watercolor renderings for a landscape architect in New Rochelle, New York, followed by a draftsman position in the New York City architectural firm of William Wheeler Smith.  During his years in New York, Chamberlain studied at the Art Students League with George DeForest Brush and George Bridgman.

Returning to New York in 1912, Chamberlain taught for four years at the Beaux Arts Institute of Design, and spent summers at the MacDowell Colony in Peterborough, New Hampshire.  He designed three structures at the Colony, and there courted his future wife and fellow artist, Katharine Beecher Stetson.  After a period teaching watercolor rendering at the Columbia University School of Architecture, Chamberlain moved with his wife and infant daughter to Pasadena, California.

Chamberlain quickly secured a faculty position at the Otis Institute.  In 1921 he was invited to become a founding faculty member at the Chouinard Art Institute.  Chamberlain also taught rendering at the University of Southern California School of Architecture, and offered private art classes in Pasadena.  He later taught at the Jepson Art Institute, founded by one of his students.  Among his other early students were Millard Sheets and Phil Dike.

Chamberlain painted in oil and watercolor in a post-impressionist style that clearly shows his classical European training.  He also made etchings and bronzes.  His art includes a wide variety of subjects including landscapes, architecture, still life, and figures.  Chamberlain executed several mural commissions including McKinley School in Pasadena, and architectural bronzes such as the lintel at Good Samaritan hospital in Los Angeles.

Chamberlain frequently exhibited his work in southern California, especially with the Pasadena Society of Artists of which he was a co-founder.  He also was a member of the California Art Club and The California Watercolor Society.  In 1955, six years before Chamberlain's death, the Pasadena Museum of Art mounted a retrospective exhibition of his art.