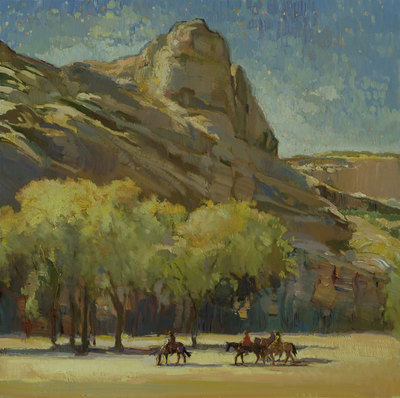 Some 30 years ago Francis Livingston found his niche painting Western scenes and Southwest landscapes, and since then he hasn’t strayed much from his path. He keeps energized by interspersing paintings of boardwalks and urban scenes. Despite differing subject matter, viewers may catch a crossover of colors between genres.

“I go back and forth between Southwest landscapes and urban/landscape scenes. I don’t have a preference,” Livingston says. “It gives me a break. It relaxes my mind and clears my brain.” 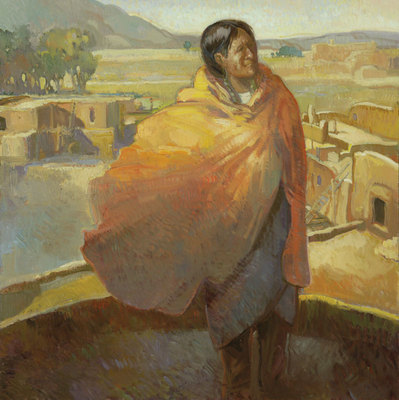 “I love to do variations of that theme and have done for years,” he notes. “ When people see the work, I want them to feel like ‘Oh, I’ve been there’ or ‘I’ve seen that’ as opposed to do this exactly what it was like. I want an emotion to come out.”

Heavily influenced by abstract artists, Livingston calls his style impressionistic and expressionistic with a touch of realism. Like his contemporaries, Livingston continues to evolve his craft. His latest paintings of figures on horseback surrounded by aspen trees and rivers continue in this vein and are richer in terms of thickness and substantial surface texture. 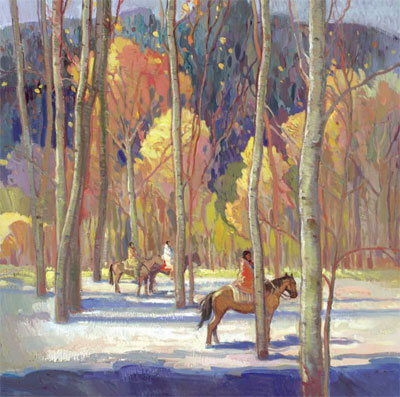 “The work is more inventive in terms of lighting,” says Livingston. “Now I’m taking a lot more chances with figures and I’m creating shadow patterns myself. It gives me a lot more control.”

Two new oils that exemplify Livingston’s tendency to incorporate figures on horseback into a quiet scene are Call of Winter and Winding River. He typically places the figures behind trees so they’re not the focal point.

“Those pieces are more about landscapes. That’s the way I look at them,” he explains. “The figures are more like little brushstrokes. When you put a figure up there it’s an accent of color that normally wouldn’t be there.”

Over the past year, Livingston has redefined his scope and transitioned into larger works. This new show will feature several big pieces – 40 by 50 inches and 60 by 60 inches – with an expanded complexity visible to the discerning eye. An example of his latest direction resonates in Laguna Depot. 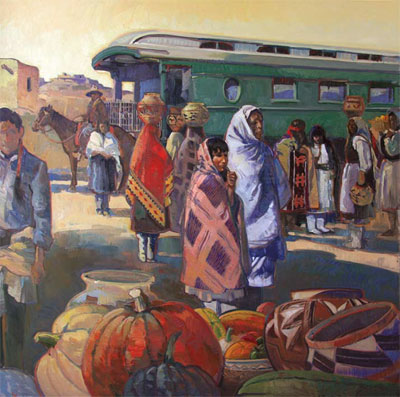 “Before a lot of my paintings were a lot simpler landscapes with one or two figures,” says Livingston. “It was more about landscapes and the figures dictated scale. This last year I’m moving in the direction to put more figures and more complexities into the composition.”

His latest piece Taos Sentinel takes this a step further with the main focus on figurative detail. Livingston pays close attention to the man’s noble facial expression and how he’s standing with the wind blowing his blanket.

“It was important to me to definitely capture that,” says Livingston. “With that piece it was more about sense of distance and depth with a close-up on the figure with mountains in the background. The building structure lends itself to figures and coloration.”

Livingston, a former renowned illustrator, admits he enjoys this progression to larger pieces. 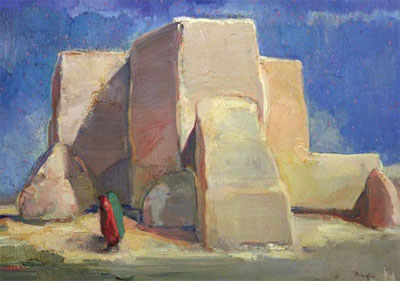 “You start working on that scale and it has a presence, not just on the wall, but while you’re working on it,” he says. “There’s so much area that you can do things with, but they take a lot of time so I can’t do a lot of them.”

Those who read Michael Blake’s book Dances with Wolves, of which the popular movie was based, may recognize Livingston’s work on the cover. The sequel novel, Holy Road, also features his handiwork. Commissioned by the author to portray a feeling opposite of the first book cover, which was warm and quiet, Livingston used vigorous brushwork to create a nocturnal scene brimming with energy and movement.

“I received specific directions from the author that he wanted to portray a feeling of energy and some violence without showing it so a lot of movement was required,” recalls Livingston. “The Holy Road was more about the energy.” 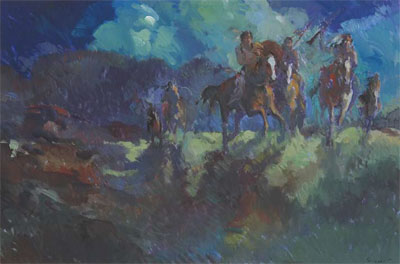 Much of Livingston’s work is inspired by the high desert, specifically northern New Mexico and southern Colorado, as well as pueblo architecture unique to the West. His new body of work pays homage to this region’s historical assets.

“There’s something about Northern New Mexico…the shapes of mountains and color relationships,” he explains from his studio in Sun Valley, Idaho. “The most important thing is light and shadow. It’s so very clear in terms of the high desert. I love the clarity and sharpness of light and shadow.”

Livingston works mostly from photos he’s taken over the years while living in the Southwest. A native of Colorado, he supplements this with historic images found in library archives and books. It’s his deep understanding of history, the land and its people that propels him to create imagery reminiscent of the Taos Founders and other respected Western artists.

“I’m not painting in 2008,” he emphasizes. “A lot of my work has a historical scene to it. Mainly the 1930s and 1940s-era where the West was changing and becoming modernized.” 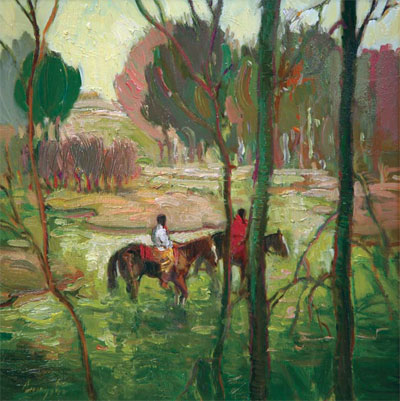 Livingston paints in oil on board, often using birch panels, because he prefers to work on a firm surface so he can create his own texture. The result gives the appearance of stretched canvas. Always drawing from the past, Livingston’s new paintings showcase a bolder move in terms of brushwork, color and composition.

“I like pushing the impressionistic and expressionist qualities of my work,” he says. “The further I can get away from a photograph, the better I am as a painter.”

The majority of Livingston’s collectors comment on his varied use of color because many hues seem invented. But he assures viewers that they’re derived from reality. Over the years, he says, he has found that many of his patrons are extremely knowledgeable about art and purchase all of his genres, not just Western or boardwalks or urban scenes.

“When they walk into a gallery, they comment on the colors I use and paint texture and the quality. They get what I’m trying to do,” he says. “I’m very influenced by Taos Founders of the early 20th century. I’m continuing where they left off in a sense. A lot of people look at my work and see it as a nice continuation of that tradition.”